Written by Evangelical Lutheran Church in Jordan and the Holy Land
December 3, 2014 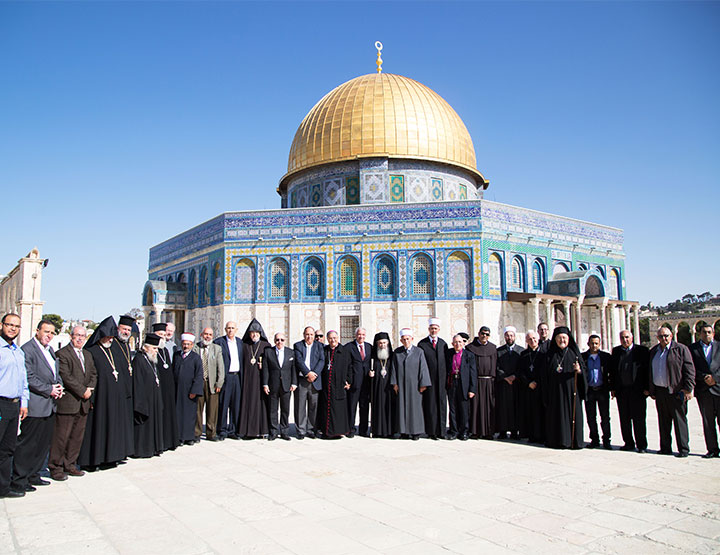 On November 10th, 2014, the Heads of Churches in Jerusalem visited Sheikh Abed Al-Atheem, Director of Al-Aqsa Mosque and Sheikh Azam Abed Alkhatib Altamimi, Head of the Islamic Waqf of Jerusalem to show their support for the historical Status Quo and a show of solidarity between the two faiths. The Heads of Churches included His Beatitude Patriarch Theophilos III of the Greek Orthodox Church, and His Beatitude Patriarch Fouad Twal of the Latin Church, His Beatitude Patriarch Nourhan Manougian of the Armenian Church, His Grace Bishop Munib Younan of the Evangelical Lutheran Church in Jordan and the Holy Land, as well as representatives from the Coptic and Anglican churches.  To read more about the visit, you can visit the ELCJHL'swebsite.

On Wednesday, November 19th, 2014, Bishop Munib Younan was bestowed with the title of Doctor Theologiae Honoris Causa from the Protestant Theological Faculty of the WestfälischeWilhelms-Universtät Münster for his work to bring peace to the Middle East.  The Bishop thanked the gathered community for the honor bestowed upon himself and his church and spoke on the work being done in the Middle East, as well as his hopes to see what happened in Germany regarding the Berlin Wall happen in Palestine and Israel as well: “What happened to the wall in Berlin is a sign of hope for us in the Holy Land. It is my hope that the concrete and steel used to build walls today will soon be used by Palestinian and Israeli children to build bridges of understanding, justice, and reconciliation.”  To read more about Bishop's honorary Doctorate, you can visit the ELCJHL'swebsite.

The ladies from the EvangelicalLutheran Church of the Reformation in Beit Jala are getting together to make pastries and baked goods to sell at their annual Christmas bazaar. On Monday, November 24th, a handful of women got together to make kubbeh, ground meat and onions instead a bulghur wheat pastry.  To view more photos from the day, you can visit the ELCJHL'swebsite.