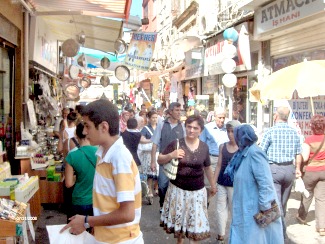 Prayers for Turkey:
We pray for the people of Turkey who struggle for freedom of expression and who work tirelessly to improve the society they live in for all people. We pray for those who work to build a better understanding between groups who have had little trust of one another. We pray for the refugees who have uprooted their entire life and brought their families to a foreign land. For some of these people they have no hope. “My soul cries out in despair. How much more can I be crushed? How much more can I endure?” Turkey has entered a perilous time, so we pray for wisdom of the government, religious, educational and civil leaders of this country. Trust in God at all times. “For you, O God, repay to all according to their work.” (Psalm 62:12b)

Mission Stewardship Moment from Turkey:
The modern Republic of Turkey arose from the ruins of the centuries old Ottoman Empire in 1923. This land has been the crossroads of civilizations and the battleground of forces since the beginning of written history. Its land was coveted for its geographic significance as it borders the Black, Aegean and Mediterranean Seas. The break-up of the Ottoman Empire was particularly devastating for all people as famine, disease and warfare raged on numerous fronts. The Armenian deportation and genocide of 1915 was a confluence of several of these factors. The Armenian community continues to cry out for acknowledgment and justice, as the official government position of Turkey continues to deny the extent and intentionality of the killings as genocide. Hope glimmers as civil society is more openly discussing its past and some have been moved to say that there was a genocide.

After 1923, Turkish Muslims faced restrictions on their faith by the secular elite as they attempted to remove religious influence on governance. Now these people themselves are facing growing restrictions under the current government by an Islamic party. Some universal freedoms are increasingly restricted as the police continually come down heavy handed on protestors and on dissenting voices.

As a major crossroad to Europe, the number of refugees has continually increased. The Syrians and Iraqis are escaping conflicts and are flooding over the border into Turkey. Others from several African nations are fleeing conflict or economic hardship and are looking for a better life.  Many refugees are becoming desperate and are paying large amounts of cash to human smugglers. For refugee agencies, there is some concern about Ebola being transmitted. Support of the Istanbul Interparish Migrant Program is very much appreciated.