Every day, the Christian community in Puerto Rico is witness to the relevance and importance of the transcendental work the Evangelical Seminary performs in preparing clergy and lay leaders to counsel, teach, and to pastor God’s people. Puerto Rico’s conflicting political relationship with the United State of America, the fiscal crisis, the declining economy, and the uncertain result of the Fiscal Control Board imposed over Puerto Rico by Congress, demands more than ever a theologically founded clergy and lay pastor preparation. The diversity of theological and historical religious experiences our students bring to the classrooms experience enrich each other. This connection was specially felt during the aftermath of the hurricanes Irma and María in 2017. During the recovery efforts, the presence of the church was an essential to the recovery. The Seminary became a hub to receive and provide services and supplies to the communities.  The theological teachings, conversations and interpretations became action. The enriched classroom experiences were evermore enriched by the connections and binding created and developed in the Seminary.

Today, the Seminary faces difficult times. As part of the Puerto Rican society, the Seminary also struggles with the declining economy and uncertain fiscal future of Puerto Rico. However, these same struggles reinforce the purpose for which the Seminary was founded, to prepare current and future pastor and lay clergy to serve the Kingdom of God.

What is my part on this partnership?

I will be working as the Seminary’s Finance Director. My main duty is to manage the limited financial resources available to the Seminary in and efficient and efficient manner to achieve the intended goals set by the Board of Directors. This includes planning and executing development plans to ensure the continuous support of the Seminary for the next hundred years.

Why do I feel called to this ministry?

The experiences lived, lessons learned, and knowledge learned throughout our lives occur for one purpose, to prepare us to answer the call to serve. The Second Helvetic Confession teaches us that the Lord calls honest, ethical and God fearful people to serve in administrating the church. My academic preparation and professional experiences are in business administration, especially in accounting and taxes (BA and MBA). I served for 25 years in the US Army as a Logistic Manager responsible for the fiscal property, contracting and service support. Those life experiences prepared me for the call to serve the church not only as a parish pastor, but also an administrator within the church.

How does the Bible take meaning in your daily work?

There two passages that take a special meaning on my daily work. The first passage comes from the Book of Exodus, chapter 16, Manna and Quail. The promise of the Lord to the People of Israel was simple, you will receive your daily bread. Only on Friday, you will collect twice the daily amount for the Sabbath. However, you will only get one portion a day. If you collected more that you share, it will spoil. The People of Israel learned to trust in the Lord for their daily support. They knew that taking more that their share was not going to work. So, they learned to trust that the Lord would provide their daily bread to cover their daily needs.

The other passage comes from the Philippians 4:13. Paul is thanking the people of Philippi for their support. Paul thanked them not only for their prayers and good wishes, moreover, for their financial support in times of need and abundance. Paul is grateful for their financial and spiritual support and in his own words acknowledge that all have been possible for Christ mercy and support has come directly throughout their actions, their prayers and offerings.

Every day we live in the Seminary the experience of the People of Israel awaiting and receiving their daily portion of God’s mercy and bread. Bread that comes from the generosity of our donors and supported. Donations promises and support that are the living testimony of God’s mercy, compassion and blessing that allows us to continue the call to serve. In the same manner, every day we live at the Seminary the gratefulness Paul expressed to the Philippians when we acknowledge that the mercy and blessing of God comes from those, that we are called to serve. And because of the connection between God’s call, and the affirmative answer to serve of those called, we at the Seminary loudly proclaim, “all we do, we do it because of and through Christ who strengthens us.” 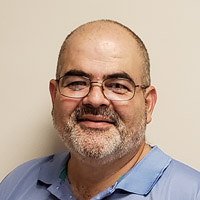 Raul Santiago Rivera works with the Evangelical Seminary of Puerto Rico. His appointment is made possible by your gifts to Disciples Mission Fund, Our Church’s Wider Mission, and your special gifts.

Make a gift that supports the work of Raul F. Santiago Rivera