Response to August 2020 Explosion in Beirut 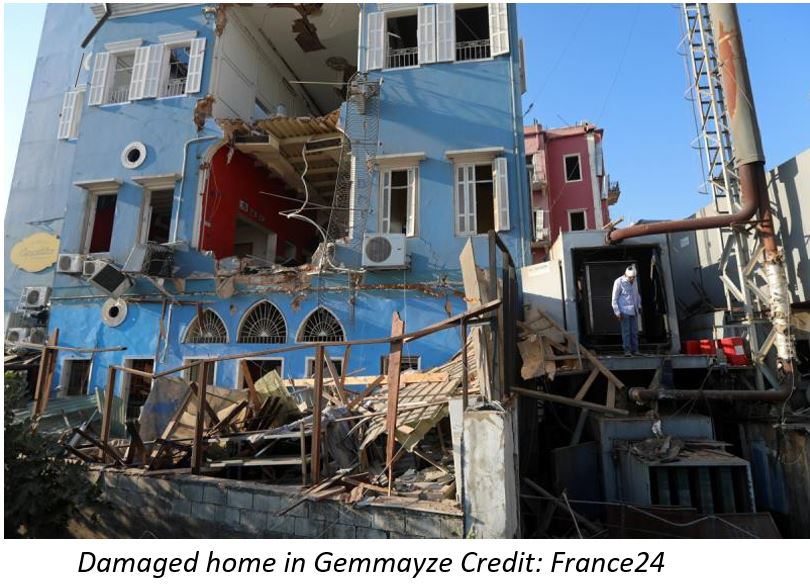 On Tuesday, August 4, 2020, a massive explosion at the port in Beirut sent shockwaves across the city, shattering windows as far as 15 miles from the blast site. The full extent of the destruction is still unknown, however buildings at the port were flattened, and apartment buildings in nearby, densely populated neighborhoods have crumbled. This disaster is devastating in a country that continues to experience the Coronavirus pandemic, a severe economic and financial crisis, distrust in government, and is attempting to provide for a refugee population from the decade-long war in Syria next door. Global Ministries shares a statement and prayer for the people of Lebanon, and continues to share updates and messages in response to the explosions in Beirut from partners in the Middle East.

Jump to the updates from:
Forum for Development, Culture, and Dialogue
Near East School of Theology
Union of Armenian Evangelical Churches in the Near East
Haigazian University
Middle East Council of Churches
National Evangelical Church of Beirut

Forum for Development, Culture, and Dialogue
The Forum for Development, Culture, and Dialogue (FDCD) is a representation of a faith-based, integrated initiative rising from the community and aiming to restore dignity to marginalized, oppressed, and dehumanized individuals and communities. Based in Beirut, Lebanon with a regional outlook, FDCD offers workshops, conferences, and dialogue sessions to promote non-violent responses to conflicts, as well as provides programs supporting the health, social and physical needs of the most vulnerable.

In response to the explosion in Beirut, the FDCD has prepared a seven-month response plan. Recognizing the material losses caused by the explosion to be particularly significant, the FDCD will be providing food parcels, renovation allowances for families, and rent assistance. The FDCD has been providing food assistance in Lebanon since the beginning of the economic crisis and will apply the same ongoing system to provide an increased number of food parcels for the next three months. Each food parcel will include various nutritious foods as well as two hygiene items. Paying rent prior to the explosion was a significant burden for many families due to rising rent prices and unemployment. Therefore, FDCD will begin providing direct rent relief for families. For families, whose homes were extremely damaged, FDCD will provide direct support to begin rebuilding or repairing their homes. Only a few months away from the onset of winter, the FDCD will work with families to begin renovations such as glass, door, and window repairs. For this project, FDCD is will be working with local contractors and suppliers to secure the materials and labor for these repairs. Additionally, they will be working with families with small businesses to repair and restore their businesses and so they can begin generating an income again.

Secondly, FDCD will be offering trauma, psychosocial support, and social cohesion programs. This will be done through two programs, the first is to offer trauma support for individuals who may have lost loved ones, lost their homes, or have witnessed the explosion. The second program will be to promote social cohesion amongst the larger community. There is a risk of those in Beirut to begin blaming other religious groups as a way to make sense of this senseless tragedy, and FDCD is prepared to help facilitate dialogue, provide safe spaces to rebuild trust and unity that has been lost, and to help families and individuals to heal past wounds created by the civil war and have never been addressed fully. Following these initial conversations, the FDCD will continue providing support of community initiatives to rebuild this sense of trust and unity in their communities.

Make a gift to support the Forum for Development, Culture, and Dialogue.

Forum for Development, Culture, and Dialogue shares a newsletter with updates after two weeks since the explosion.

Near East School of Theology
The Near East School of Theology (NEST) is an interdenominational Protestant theological seminary serving the Evangelical churches of the Middle East and African churches. NEST was formed in 1932 by the merger of the School for Religious Workers in Beirut and the School of Religion in Athens, Greece. It was built on a history of evangelical theological education going back to 1835. In 1971, the School was moved to its current home: a modern, well-equipped building two blocks south of the American University in Ras Beirut and located a few miles from the port where the explosion took place. 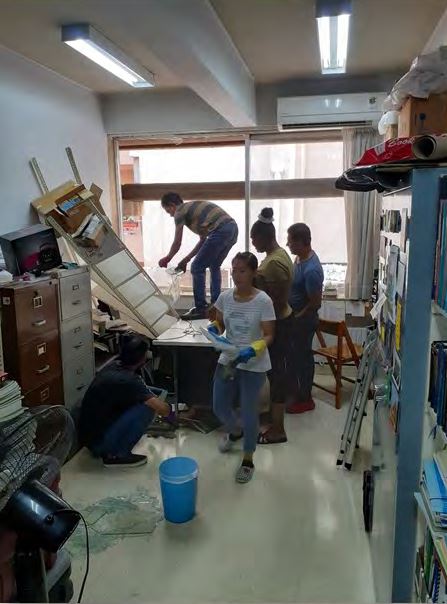 NEST reports that no one was injured at the school because of the huge explosion, and while there were not many individuals in the building, those who were inside were able to escape unharmed. The damage to the building, however, is extensive. All eight floors above ground and two basements were struck by the blast. Glass windows, glass doors, glass panels inside the building, as well as many internal wood doors are now shattered. In speaking on the damage to the NEST facilities caused by the explosion, Dr. George Sabra, President of the Near East School of Theology shares: Never has NEST been hit so badly, not even during the worst days of the 15-year war in Lebanon.

Staff and several others have started to clean debris and broken glass throughout the building. NEST indicates they have no expectation the glass and doors throughout the building will be replaced soon, due to the now great demand for glass panels and repairmen in the city. The seminary is evaluating the cost of repairing the damage but understand it will be enormous.

Make a gift to support the Near East School of Theology. 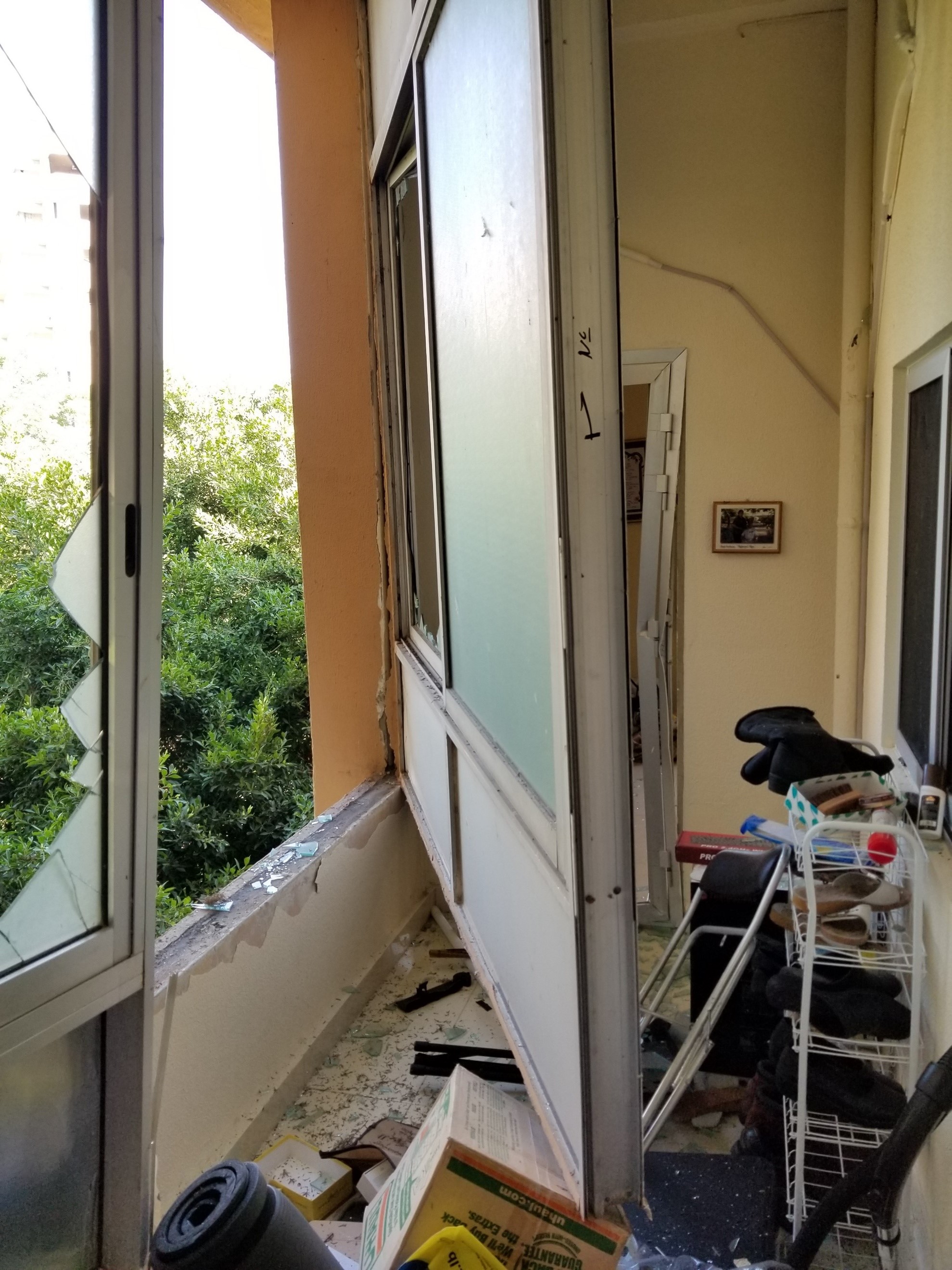 As the Union continues to assess the damages caused by the explosion, four priorities have emerged to begin their response: to repair UAECNE ministry buildings located in Beirut, to support families whose homes are unlivable, to offer healthcare support, and to provide relief for families.

From the initial assessment of the school buildings, church buildings, elderly care home, social services center and the UAECNE headquarter offices, most of these buildings have experienced extensive damages, including to roof tiles, window frames, sanctuary pulpits, doors, libraries, classrooms, and playground equipment. In addition to repairing the damages at each of these buildings, the Union is preparing to support families whose homes have become unlivable from the areas of Bourj Hammoud, Ashrafieh, Mar Mikhael, and Gemmayze. The Union is helping with urgent home repairs, and helping families repair their shops and small businesses which have been closed as a result of damages to their buildings. Additionally, the UAECNE will be working with families to provide support depending on each family’s situation and will be offering healthcare assistance for individuals who are injured from this explosion.

Make a gift to support the Union of Armenian Evangelical Churches in the Near East.

Haigazian University
Haigazian University is a liberal arts higher education institution in Beirut, Lebanon, which seeks to provide quality education in a Christian environment where academic freedom and the search and dissemination of truth are predominant. The ethnic and geographic identity of the University advocates for the preservation and promotion of its Armenian and Middle Eastern heritage within the global context. Haigazian University is a witness of the Armenian Evangelical Church, and is open to academically qualified students regardless of race, nationality or creed. The life of the University reflects the rich, cosmopolitan, and pluralistic Christian-Muslim society of Lebanon, and promotes dialogue, harmony, and integration among all sectors of the Lebanese community. 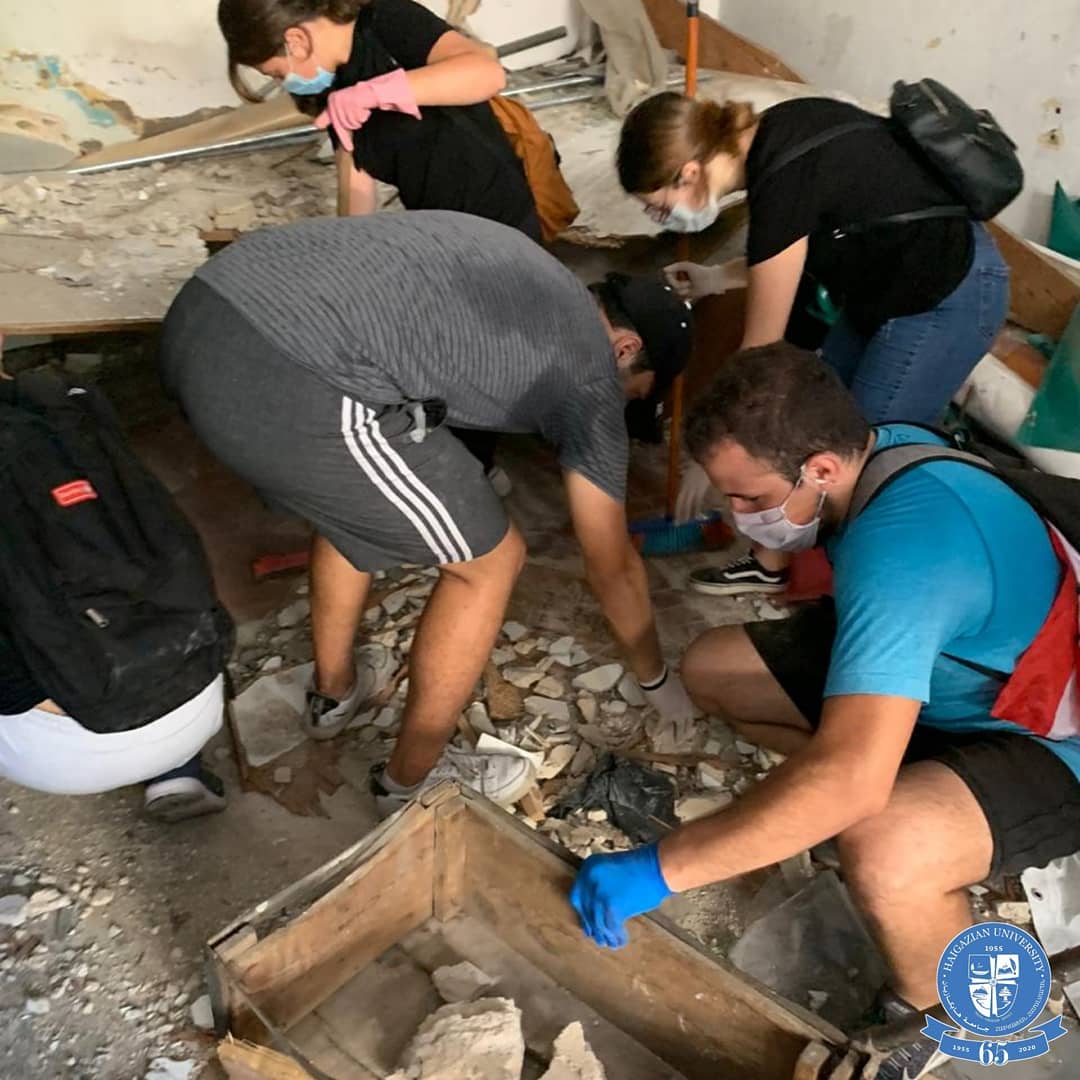 Haigazian University is responding to the catastrophe in various ways. Students and alums, along with staff and faculty members, are helping to clean up damaged homes and workplaces, and are providing food and water to people in the affected neighborhoods. The University will offer assistance in trauma relief for the community soon as well.

The seven buildings of Haigazian University campus have endured substantial damage from the explosion. Interior walls, ceilings, doors, window frames and panes have been damaged, including 78 broken doors, 198 ceiling panels, 189 windowpanes, 57 window frames and various lab materials and desks. The total costs to renovate the campus will be significant.

This year, the University has created a new scholarship fund to assist students with financial aid and to increase the IT infrastructure capability to allow students to participate in remote learning. Other priorities for the 2020-2021 school year includes purchasing laptops, internet connections, servers, tablets, and multiple supplies to improve remote learning opportunities.

Make a gift to support the Haigazian University.

Middle East Council of Churches
The Middle East Council of Churches (MECC) is a council of 27 member churches gathered in four families–Oriental Orthodox, Eastern Orthodox, Protestant, and Catholic. Spanning the Middle East and North Africa from Algeria to Iran, there are 12 to 15 million Christians are represented in this all-inclusive council. The MECC has several units and programs, including the Department of Service to Palestinian Refugees, and the Inter-Church Network for Development and Relief in Lebanon (ICNDR).

Since its inception, MECC has always considered that standing with vulnerable people is not just a social duty but a Christian responsibility. One of the strategic objectives for MECC is to uphold human dignity in times of conflict and during all types of disasters. Currently in Beirut, church volunteers from all denominations and from civil society groups have stepped up to begin removing the rubble and debris from streets. Schools and monasteries have opened to host people who have been left without a roof and daily meals.

To respond initially, MECC is distributing hygiene kits, dignity kits, kitchen sets, bedding sets, food kits, and medicines for families. Additionally, MECC is providing medicine for many patients with chronic diseases and immediate health challenges who are living in shelters or with their relatives after having lost their homes.

For volunteers who are helping clear debris from churches, hospitals, and the streets, MECC provides COVID-19 safety equipment such as face masks, gloves, face shields, sanitizer, and tools such as shovels, brooms, bags, and carts for moving rubble. MECC distributes these items through the existing networks of churches and local church programs. In the future and after assessing the situation with multiple local partners in Beirut, MECC plans to support the rehabilitation of damaged homes and schools.

Make a gift to support the Middle East Council of Churches. 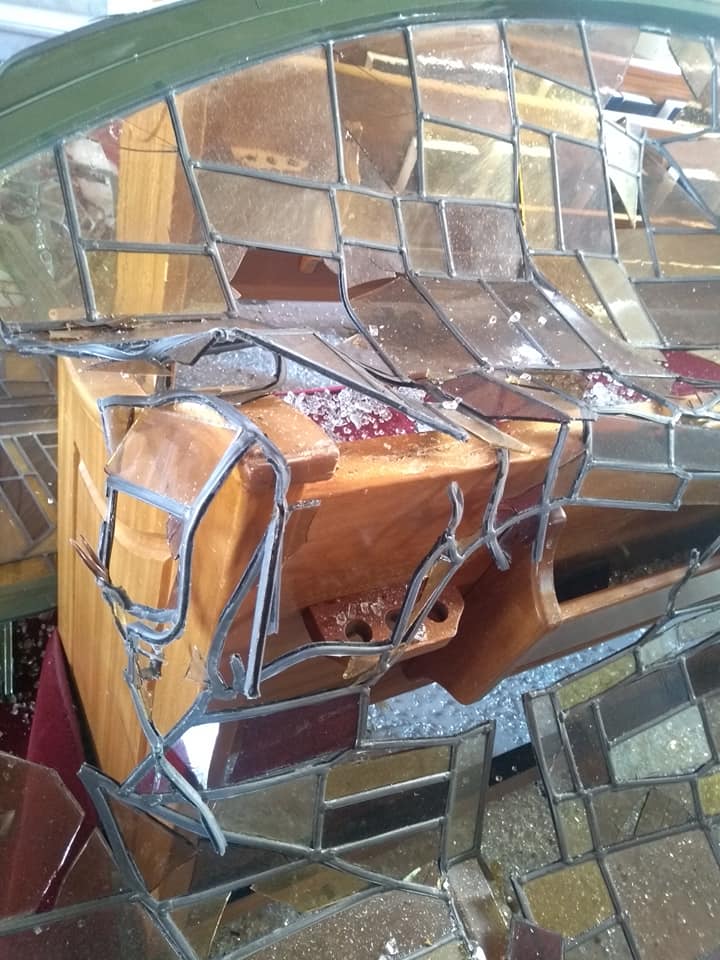 Many rooms of the church were damaged extensively by the explosion, including the sanctuary, the small chapel, the multi-purpose Charles Saad Hall, the youth room, church offices, the Sunday School Hall, and the Pastor’s apartment. With the help of NECB youth and young adult groups and adult members of the church, most of the debris has been cleaned up. To begin reconstructing the damaged features, the church will be restoring window frames, installing new glass in the windows, installing new doors, restoring church benches, and replacing ceilings, desks, the kitchen, and light fixtures. Additionally, the large stained-glass window of the sanctuary, which was installed in 2017, was mostly shattered by the explosion. Due to the significant costs of the total renovations necessary, the NECB plans to install regular glass and replace the aluminum frames of where the stained glass windows were previously. 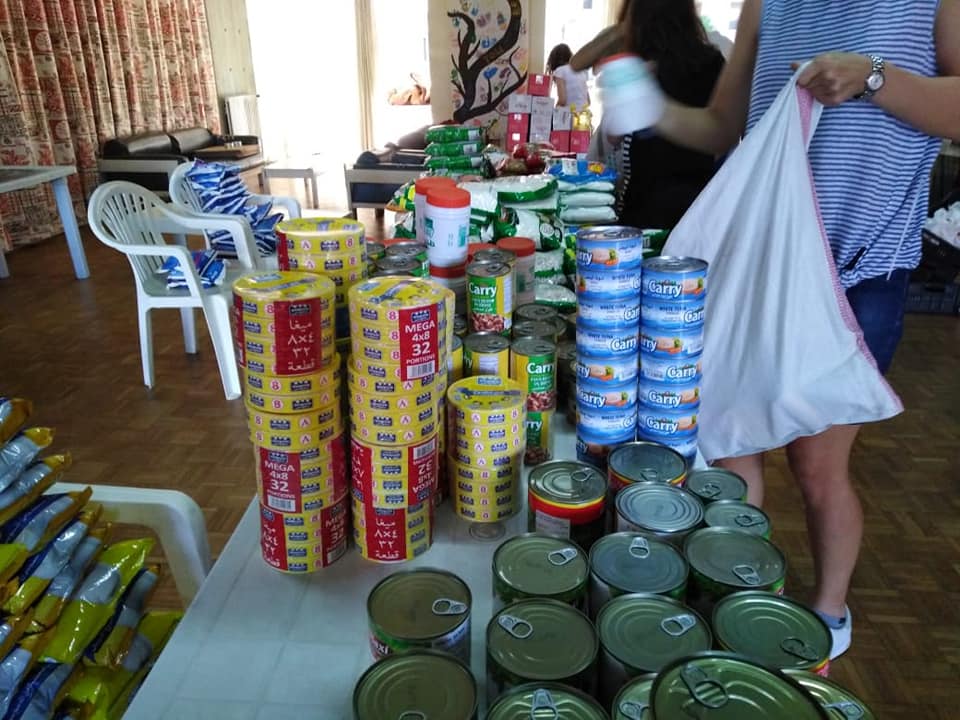 While the church restores the damaged physical spaces, the church has been providing food, medicine, and financial help as well for families who are displaced from the explosion. Young adults and youth from the church are volunteering to prepare the food parcels and distributing them to the community.

Make a gift to support the National Evangelical Church of Beirut.