For we do not proclaim ourselves; we proclaim Jesus Christ as Lord and ourselves as your slaves for Jesus’ sake. For it is the God who said, “Let light shine out of darkness,” who has shone in our hearts to give the light of the knowledge of the glory of God in the face of Jesus Christ. But we have this treasure in clay jars, so that it may be made clear that this extraordinary power belongs to God and does not come from us. We are afflicted in every way, but not crushed; perplexed, but not driven to despair; persecuted, but not forsaken; struck down, but not destroyed; always carrying in the body the death of Jesus, so that the life of Jesus also be made visible in our bodies. For while we live, we are always being given up to death for Jesus’ sake, so that the life of Jesus may be made visible in our mortal flesh. So death is at work in us, but life in you.

One of the challenges we encounter in reading Paul’s letters is the temptation to universalize what is specific to a particular context, or to overlook the enduring significance of what was written to address a specific situation. There is in Paul’s writings surmise as well Scripture; blog as well as Bible. Paul was still “working things out,” and he was doing that in the context of his own experience as a missionary and of the fundamental discussions and debates that were roiling the community of the early followers of Jesus, represented vividly by the controversies that were rife in the boisterous church in Corinth.

One of the issues that Paul addresses in this section of this particular letter to the Corinthians—there may have been several letters compacted into the two preserved in the Canon—is the question of “seeing” God’s glory. The poetic verse 6 of this chapter of 2 Corinthians gives a startling response:  “If you want to experience God’s glory, look to the face of the crucified Christ.” This assertion represents the culmination of an argument that began in the preceding chapter. Whereas formerly God’s glory was veiled by the Law, just as Moses’ luminous face was veiled after his encounters with God (2 Cor. 3: 7-11), the veil of the Law is now removed so that we can see God directly in the face of Jesus. This is not a question of supersession, but of fulfillment; it is glory proceeding to greater glory.

Paul was not scoring a debating point here, although he certainly was responding to his theological detractors in the church in Corinth; rather he was making a fundamental existential assertion about the nature of the body of Christ. Those stunning contrasts he enumerates in verse 9—“afflicted but not crushed; perplexed but not driven to despair; persecuted but not forsaken; struck down but not destroyed”—are not the laments of someone who has found himself on the wrong side of history and is feeling sorry for himself; they are the bold assertions of one who considered such adversity to be a sign of faithfulness. In other words, suffering is not an unfortunate consequence of being a follower of Jesus; it should be considered normative for followers of Jesus. A visiting Coptic nun once admonished a UCC congregation in Wisconsin, “What you people need is a little persecution.”

Which, I think, helps to explain the puzzling final verse of this excerpt from 2 Corinthians. “Death is at work in us; life in you.” Fred Craddock suggests that quotation marks be placed around the words “death” and “life,”[1] and that a heavy dose of irony is intended for Paul’s theological adversaries, who most likely were focused on the empty cross, with its implications of a “gospel of success.”  We cannot embrace the empty cross without a profound appreciation for the centrality of “Christ crucified,” or as the New English Bible puts it more vividly, “Christ nailed to the cross.” To quote C.S. Lewis, “Grace is free, but it isn’t cheap.”

A dear friend, a colleague, once asked me the provocative question, “Why is it so important to maintain a Christian presence in the Middle East?” We had been talking specifically about the plight of the tiny Syrian Orthodox minority of southeastern Turkey, once part of the heartland of Christianity. Today those hangers-on number only in the tens of thousands, their population having been decimated first by ethnic cleansing that was contemporaneous with the Armenian Genocide and later by the conflict between Turkey and Kurdish nationalists, and by the consequent temptation of emigration to the West. For many Middle Eastern Christians the experience of the Syrian Orthodox people of southeastern Turkey is but a foreshadowing of the fate of the other Christians in the region where Christianity was born. 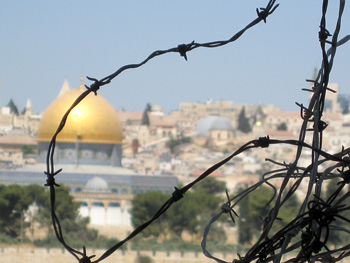 The survival of Christian communities in the Middle East is, indeed, very tenuous. Some might consider it a lost cause.  Christians have left, or been forced from, Iraq, Syria, Palestine and Turkey in large numbers, and their future is uncertain even where they are most numerous, in Egypt. Demographic trends throughout the region are not at all promising for Christians, because of both emigration and low birth rates. And, more recently, Christians have been the target of murderous attacks by extremist groups like ISIS.

Why indeed, beyond some kind of benighted nostalgia for the Holy Land, should we care whether Christians will be found there in the future? Why not adopt the approach taken by an American ambassador to Syria who once assured the late Patriarch Hazim of the Antiochian Orthodox Church, “Don’t worry, we’ll do our best to provide refuge for the Christians of Syria if things go badly for them in the future.” In other words, it doesn’t matter where Christians are as long as there are Christians.

There is an enduring theological challenge here. And the response is provided by our passage from 2 Corinthians. For Paul, the distinctive mark of the Christian faith is the scandalous proposition that God becomes human so that humans can participate in the divine. The Christian faith is not a belief system that exists in splendid indifference to the particularity of any given human situation, nor is it a DIY route to a happier life. The Christian faith is centered on presence, on God With Us, God With Us where we are; it is centered on the Christ who suffers with and for us as the supreme expression of God’s compassionate heart. “For while we live, we are always being given up to death for Christ’s sake, so that the life of Jesus may be made visible (italics mine) in our mortal flesh.” Christians both witness and are witnessed.

A friend of mine confessed that she always feels guilty on Good Friday, not for the expected reasons, but because she doesn’t feel sad enough about Jesus’ crucifixion. “I know how it comes out,” she explained. Well, what if we really didn’t know how it comes out? What if all we had experienced in life was the reality not of an empty cross, but a cross laden with Jesus’ broken and tortured body? What if the resurrection is not a matter of antiseptic belief, but of costly faith? What if the resurrection isn’t about certainty, but about radical trust?

3. What can marginalized mainline Protestants in the West learn from marginalized Christians in the Middle East?

4. Do you ever wish that we had a crucifix at the center of our worship? Why, or why not?

Dr. Dale Bishop served as the Middle East Executive for Global Ministries from 1980 to 1999, after which he was Executive Vice President of the United Church Board for World Ministries and Executive for Wider church Ministries. Before retirement, he served as Pastor of First Congregational UCC in Rhinelander, Wisconsin. Prior to his work with the church he taught Iranian Studies at Colombia University in New York.