In January 2020,  Global Ministry has joined an ecumenical effort to provide much-needed medical supplies to China through one of the mission partners Amity foundation, which is an independent Chinese organization founded in 1985 on the initiative of Chinese Christians.These medical supplies have been delivered to over 300 hospitals, medical centers, and more than 100 communities and township-level organizations in 14 cities, 1 autonomous prefecture and 3 counties in Hubei and Jiangsu Province.

Besides the medical supplies, on March 22, the Guarding Angel project of Amity Foundation officially came to an end. During the 42 days of implementation, the project provided 141,785 meals, 230 cases of tinned milk, 540 small cakes and 7 big cakes for front-line medical workers in 17 cities across the country.

As confirmed cases in China are continuously decreasing in March, Amity Foundation begins to provide supplies to overseas countries. On March 23rd, the first shipment from Amity Foundation  - 10,000 surgical masks and 50,000 disposable masks - were loaded and shipped to Shibuya District, Tokyo, Japan, which is the main venue for the Tokyo Olympics. On March 27th, Ms. Kimiyo Matsuzaki, the Chinese-Japanese friendship ambassador, handed over the supplies on behalf of Amity to locals.

On March 25, Amity Foundation cooperated with Jinde Charities, a Catholic charity in China,  to donate emergency medical protective materials, including 500,000 disposable surgical masks, plus other protective suits, regular masks, and goggles, to countries with severe epidemics, such as Italy, Spain, and Germany.

In response to the outbreak of COVID-19, from January until now,  the Churches in China have temporarily closed and discouraged congregational activities and changed it to online worship and all students of the seminaries and Bible Schools stayed at home to participate in their online classes.

Between February 2nd and 11th, China Christian Council (CCC) and National Committee of Three-self Patriotic Movement of the Protestant Churches in China (TSPM)) corporated with Amity Foundation to donate medical protective materials and ventilators to the hospitals in Wuhan and other major cities in Hubei province. They also sent disinfectant for the communities in Hubei to spray through the streets to prevent the virus.

In responding to the calling of CCC and TSPM, the local churches and individuals have been committed to working together with communities to share the social responsibilities and generously donated supplies and money to the areas most affected by the coronavirus.

Hubei Provincial Christian Council and Mid-South Theological Seminary in Wuhan played an important role as a transfer station of medical supplies which were sent by local churches in China. They organized church volunteers to deliver those antivirus emergency supplies as soon as possible to the hospitals, police stations and communities.

The churches in Henan province have donated 11,000 surgical masks and more than 1300 boxes of instant noodles and milk to the front-line medical workers.

Due to the decreasing number of confirmed COVID-19 cases, most of the cities in China including Wuhan reopened on March 7th after almost 11 weeks of lock down. Although the people are allowed to travel between cities, it is not the time for the people to return back to normal.  We will continue to pray for and support each other in this difficult time. As the sign on the donation box of Amity Foundation says "the greatest healing therapy is LOVE and AMITY".

I officially started to work for East Asia and the Pacific office of Global Ministries in April this year as a coworker for China, and my work is based in St. Louis Missouri. I am so excited to have this opportunity to serve Global Ministries and mission partners in China. The area executive Mr. Derek Duncan and I planned to visit China earlier this year, but we have to postpone this visit due to the COVID-19 pandemic. Although we couldn’t physically meet our mission partners in China at this moment, I kept in touch with China Christian Council, Amity Foundation, Shaanxi and Henan Provincial Christian Council, the seminaries, and friends through social media and we learned from each other.

Global Ministries Joins Ecumenical Effort in Response to the Coronavirus

Posted on News by Global Ministries (Disciples of Christ and United Church of Christ) · August 28, 2018 9:42 AM 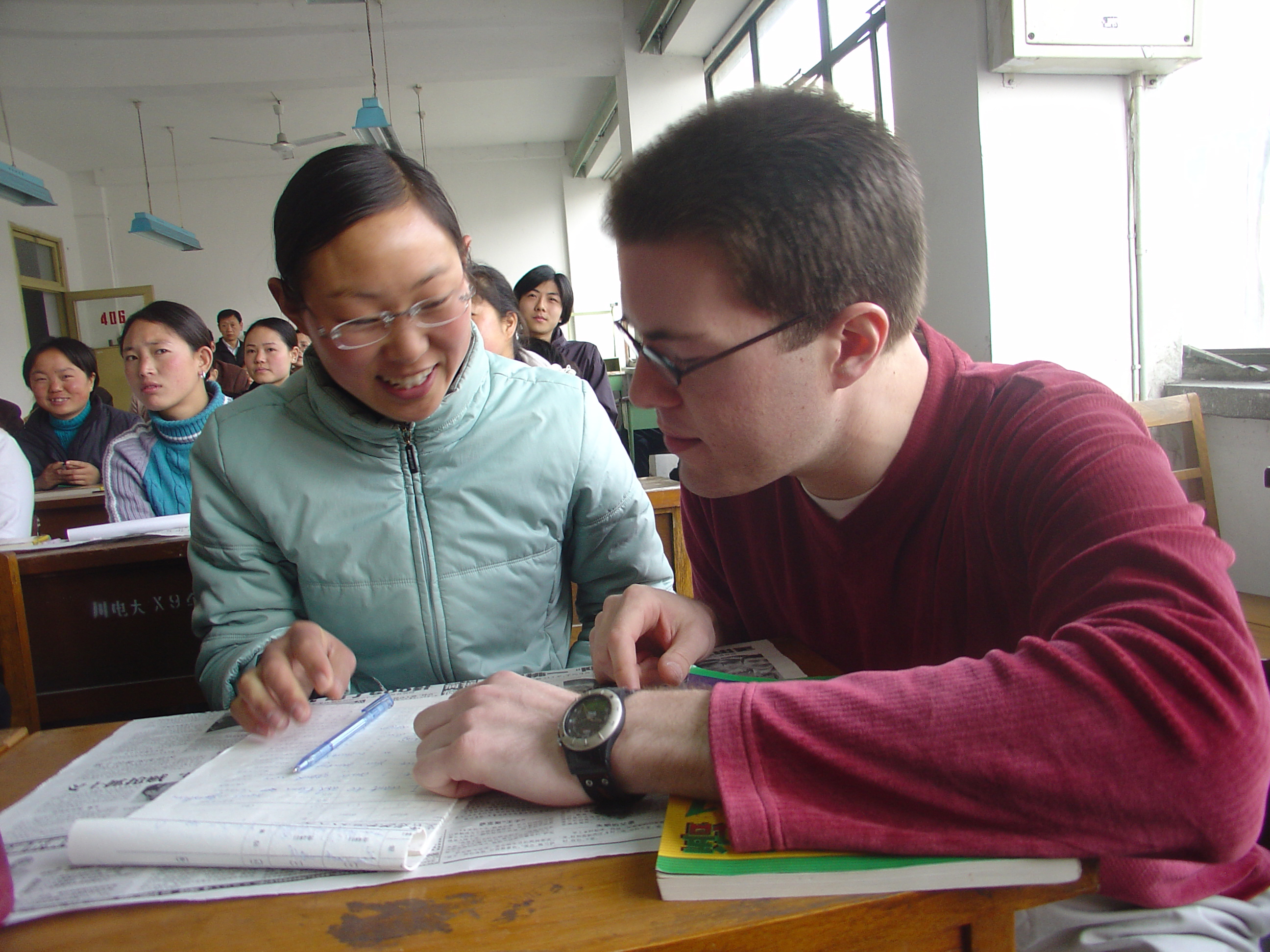 Global Ministries is looking for individuals interested in participating in the Amity Summer English Program (SEP) to train Chinese teachers of English in less-developed parts of China. The SEP is a wonderful opportunity to spend a month in China, helping primary and secondary school Chinese teachers, many from rural areas, to develop their English language skills. The program runs from July 9–August 6. Scholarships for travel are available. Interested?  Please contact Catherine Nichols. Applications are due by April 30.

The Committee for Week of Compassion sends their greetings from China. Thanks to an anonymous gift, the committee has been able to make this journey of relationship for the same cost as their typical meeting in Indianapolis. Alongside the regular business of the committee, they are visiting a number of communities who have received support from Week of Compassion. We are grateful for the opportunity to build relationships and equip the committee members to share the stories of the impact of Week of Compassion. The trip is being led by Rev. Xiaoling Zhu, Global Ministries Executive for East Asia and the Pacific. 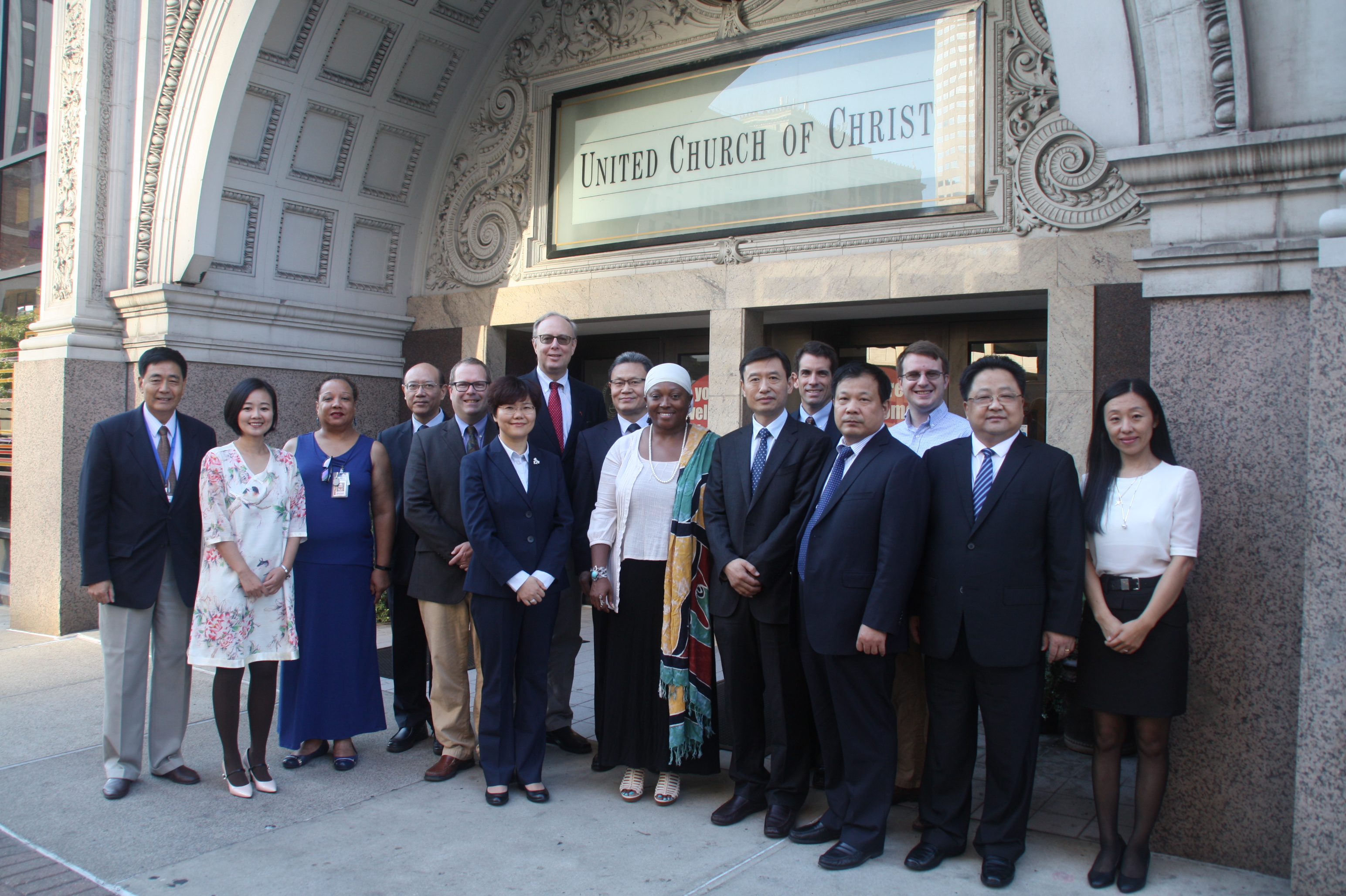 The China Christian Council (CCC) and the National Committee of the Three-Self Patriotic Movement of Protestant Churches in China (TSPM) delegation, led by Rev. Dr. Feng Gao, President of the China Christian Council, visited Global Ministries at the United Church of Christ's office in Cleveland Sept. 22-24, 2016. Both sides shared their fruitful and joyful mission works as well as past challenges.  The CCC has more than 40 million church members with 400,000- 500,000 people baptized every year. However, there are only about 3,000 pastors, 6,000 elders, and 190,000 church volunteers to serve the church in China. The number of graduates from the 22 seminaries in China is far below the needs of the church. Together we are looking forward to a closer ecumenical partnership in the future.

Amity Foundation is an independent Chinese organization founded in 1985 on the initiative of Chinese Christians.  Celebrating their 30th anniversary, the 2015 Amity Outlook report shares how Amity responded to the Nepal earthquake and hosted a delegation of Denmark youth through its international student exchange program.

In this 2015 Annual Report of China Christian Council's Social Service Ministry, CCC shares recent news of an expansion in providing medical tests and treatments throughout rural areas, providing water purifiers to areas without access to clean water, and a volunteer project of local residents to clean out a polluted river.