Let me begin by thanking those of you who so often ask me “How’s Max?” and who let me know that you are holding him in prayer. And for those of you who have wondered “Where’s Max?” let me take this opportunity to offer a long-overdue update. 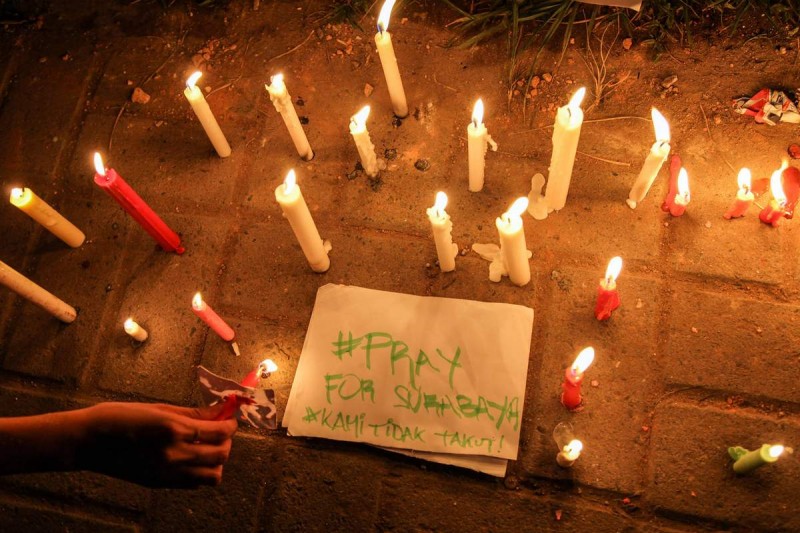 We are indeed sad and shocked to hear about the ghastly act of terror in three churches - Santa Maria Tak Bercela Catholic Church (STMB), Diponegoro Indonesian Christian Church (GKI), and Surabaya Pentecostal Church (GPPS) in Surabaya on May 13, 2018. We pray for the families of the 11 people killed and 40 others who were injured. We also pray that God may grant courage and strength to the churches and Christian communities in Indonesia at this time of terror and tragedy.

It’s not every year the tropical rains drench, and drench some more, but this is one of those years. And when the rains transform pah meto (dry land, the Timorese name for this island) from crusty, hot brown to lush and steamy shades of green, it’s easy to forget that water was once sacred. Oral tradition suggests that in a pre-Christian era, Timorese treated large banyan trees and the natural springs their roots guarded with the respect reserved for holy space. Such trees, I’ve heard, were actually targeted by Christians to be hacked down to break their powerful hold over “heathens.”  Traditional prayers and rituals asking the sky god for rain are but a faded memory. The cultural destruction wrought by early 20th century Christian piety in West Timor included the destruction of traditional values that protected the environment and sought to sustain ecological balance. Although some in Evangelical Church of West Timor Synod (GMIT) acknowledge, regret, and seek to redress this legacy, recapturing sacredness, once it’s been destroyed, is a challenge.

O guardian of sacred space—of our fellowships of intent, our bodies and souls, we pray for the migrant workers of Indonesia whose poverty makes them vulnerable to trafficking and abuse in foreign lands, and whose families accept their absence as the new normal. May your mission of redemption touch the lives of those far from home, trapped as indentured laborers, some maimed for life. We pray for the Evangelical Christian Church of Timor that its new ministry, House of Hope, reflect its name in action. Guide its staff and board members as they seek to provide safe shelter, and care of body and spirit to victims of human trafficking. Strengthen us to accept this as our mission as well. Grant us courage to overturn the tables of those who exploit naiveté; and drive from our temples those who forfeit integrity for profit. We pray especially for 21-year-old Adelina who returned home from Malaysia in a coffin at the beginning of Lent. May your comfort touch the lives of her family so they too can join your mission of redeeming and renewing hope. In the name of Jesus, whose anger we remember, Amen.

Focusing on the theme ‘Lord, Send Your Light and Truth to Lead Us’, the Asian Ecumenical Youth Assembly (AEYA) initiated by the Christian Conference of Asia (CCA) is scheduled to take place in Manado, North Sulewesi, Indonesia, April 6-13, 2018.

Interfidei is a Global Ministries partner in Indonesia. This newsletter features articles on art and culture, peacemaking, and the history of Interfidei.

In her seminal work, Texts of Terror (Fortress Press, 1984), Phyllis Trible gives us stories, a methodology, and a perspective for engaging with the Bible in ways that challenge us to admit: “Sad stories do not have happy endings” (p. 2). For example, Hagar is a woman of many “firsts”.

“Wait with anticipation” is the age-old theme of Advent. As a child I remember waiting with anticipation for Christmas morning when my brother, sister, and I would fly downstairs to piles of bright gifts beneath a spruce covered in glitter and glass ornaments. Sunday School had taught me there was a connection between God’s gift of love in the birth of Jesus and our giving gifts to one another. But in a youngster’s imagination, that meaning became murky—there was always a disconnect between the message of a baby born in a stinky manger (surely it stank as any livestock owner knows) and the glitter of toys.