The story shared by Fr Yukoub Babawe of the Oum-El-Nour Relief Committee of the Syrian Orthodox Church in Iraq’s city of Erbil moved and challenged participants at a recent meeting in Beirut.

"Give thanks to the Lord for He is good, His mercy endures forever" (Psalm 136:1)

Final Statement of the 11th General Assembly of the Middle East Council of Churches, issued in Amman, Jordan, on 8 September 2016.

The Middle East Council of Churches (MECC) held its 11th General Assembly this week, bringing leaders from regional churches together to pursue a unified ecclesiastical voice in the midst of human suffering that is permeating the region.

Friendly Outdoor Spaces in the Desert

As part of the Orthodox Initiative's project at the border, they are implementing the phase of creating safe and friendly environments in the unofficial camps they are working with, by establishing communal and colorful spaces in the settlements.

In March 2016, Global Ministries of the Christian Church (Disciples of Christ) and the United Church of Christ led a delegation of church leaders to the Middle East to meet ministry partners there. Disciples Mission Fund and Week of Compassion support these partners and many others in the land where Jesus and the apostles first walked and where their descendants still live today. The following is the Rev. Dr. Sharon Watkins' fourth reflection on the trip.  The previous reflections, and other delegation members' reflections, are available here. 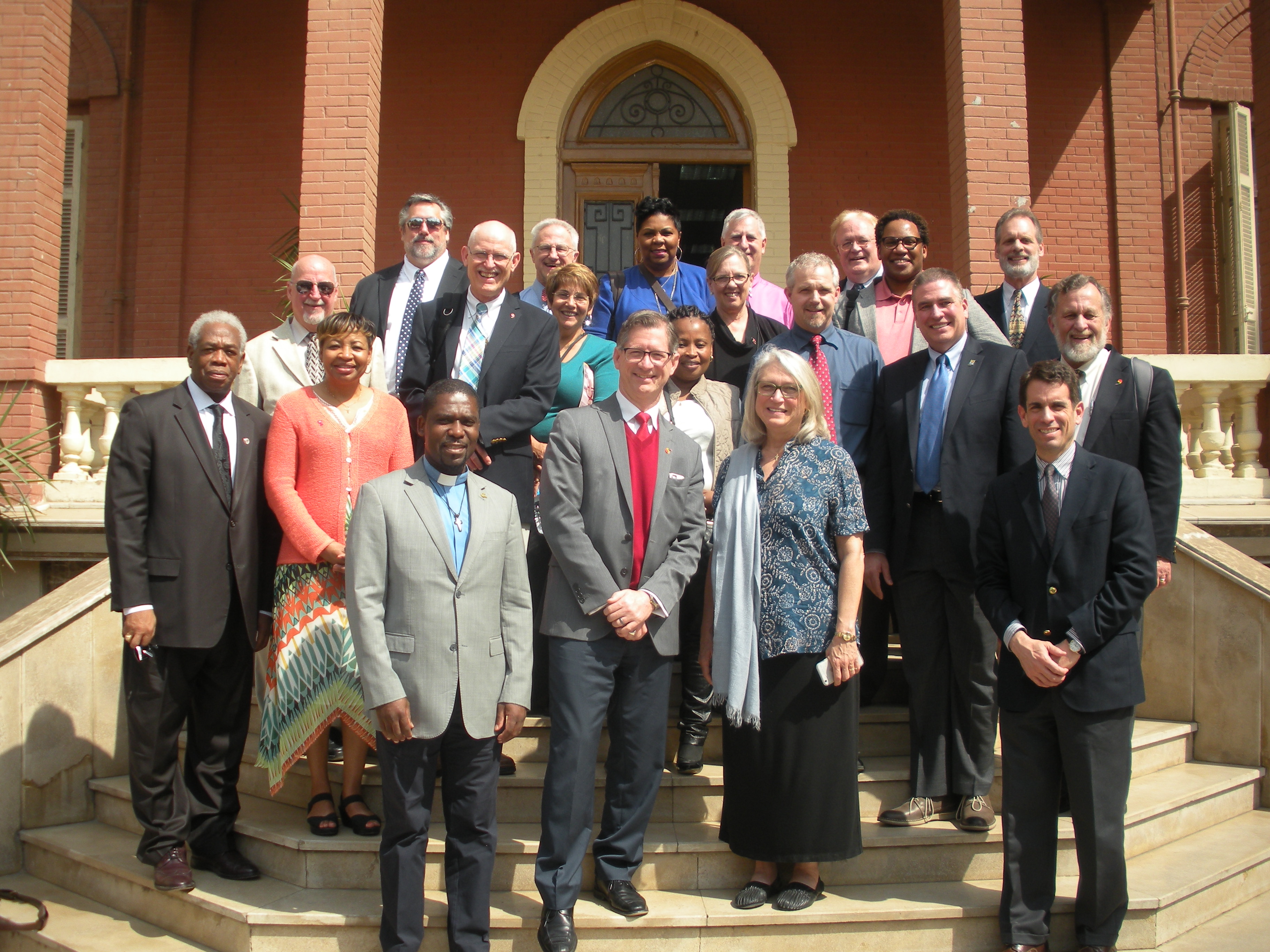 A 21-person delegation made up of leaders from the United Church of Christ and the Christian Church (Disciples of Christ) traveled to four Middle East countries as part of an ongoing expression of solidarity with Middle East Christians. The pilgrimage was the first trip to the region for the Rev. Dr. John Dorhauer, General Minister and President of the UCC, and the Rev. Traci Blackmon, acting executive minister of Justice and Witness Ministries. They were joined by the Rev. Dr. Sharon Watkins, General Minister and President of the Disciples of Christ. In addition, seven UCC conference ministers, six regional ministers from the Disciples of Christ, a representative from the United Church of Canada, and two representatives from the United Congregation of Churches in Southern Africa made the trip.

Peter Makari, area executive for Global Ministries' Middle East and Europe, led his largest delegation to the Middle East for two weeks, from Feb. 28 through March 11, to Egypt, Lebanon, Jordan, and Israel-Palestine.

The pilgrimage came in the middle of the Middle East Initiative, which Global Ministries kicked off last summer, inviting the wider church to focus on the region for an 18-month period before concluding in December 2016. Through mission and partnership, churches can learn more about the dozens of denominational partners in the region and the issues they face, learn about how the UCC and Disciples of Christ continue to build on the long-lasting history of engagement, and become active in education and advocacy efforts for peace and support various programs.

Reflections from Rev. Dr. John Dorhauer - My Visit with the Mufti, A Holy Week reflection of hope and resurrection

Reflection from Richard Spleth, Regional Minister for the Indiana Region of the Disciples of Christ - In the Spirit

Sermon by Rev. Dr. Paxton Jones, Regional Minister for the Kansas Region of the Disciples of Christ - It's Not Them

Traci Blackmon delivering a keynote speech immediately following the trip at "Super Saturday" of the Connecticut, Massachusetts, and Rhode Island Conferences, on March 12.

Rick Spleth recorded this video for DisciplesNet and it was streamed by them for their Sunday morning worship service on Sunday, April 3.  The assignment was to create a sermon on the lectionary text for the week, John 20:19-31, and also to reflect on the trip.

We Are Present by the Orthodox Initiative, celebrated Mother's Day with the Syrian refugees at the Sabha and Subaiha camp, one of the settlements we work at, in Northern Badia/Jordan, at the Syrian border.

With all that is going on in the Middle East where religion is used by many players to justify political, military and economic goals, we want to share a reflection inspired by the season of Lent.

Our Lent began with a meditation on the story of Jesus on the Mount of Temptation, after his baptism and at the outset of his ministry (Luke 4:1-13). Trying him, the devil pulls out a number of slick and deceptive acts from his bag of tricks.  At the beginning, addressing Jesus’ hunger, he sounds quite logical – acknowledging Jesus’ power while putting him to the test. Rather than proving himself to the devil, Jesus answers him with his natural, incontestable, divine authority to which the Scripture is a witness. The devil then surprises us twice: