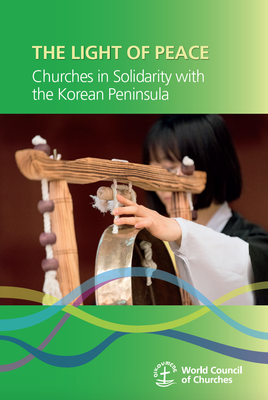 The National Council of Churches in Korea convened the historic launch of a People's Peace Agreement for Korea as a "first step to ending the war.”

Story by Anne Casparsson re-posted from World Council of Churches

A Declaration for the People’s Korea Peace Agreement was launched on 23 July at a global Zoom convention initiated by the National Council of Churches in Korea, along with civil organizations.

Your power and love are beyond reckoning.

In such a time when fear grips humanity, we seek the comfort that only You can provide; so that we may endure our difficulties and stand with our siblings.

In the blessed name of the Son, Jesus Christ our Lord, in whose name we pray, Amen.

A Prayer for A Nuclear-Free World

This prayer was written for the inaugural worship of the Korean Christian Network for a Nuclear-Free World, also known as the Korean Network for a World Free of Nuclear Power and Weapons, on March 1, 2012, to commemorate the 93rd anniversary of the 1919 Independence Movement against Japanese occupation and the first anniversary of Fukushima nuclear reactor disaster at once. The original Korean version was translated into English by Ms. Maryon Kim, and modified by the author.

God of freedom and liberation!

Facing the 93rd anniversary of the 1919 Independence Movement,
we remember our ancestors,
who believed in the God of the Exodus and courageously rose up toward a future of life.

With the sincere faith of conscience, and the hope of a joyful life for future generations,
they declared this nation's right to life, freedom and independence,
and they prayed for true peace in Northeast Asia and the world.

But now at the start of the 21st century
we witness, with worried and fearful hearts,
that this beautiful peninsula is covered by the dark cloud of nuclear weapons and power plants.

In this land where Rachel's lamenting over historical pains has not ceased,
and where the scars of suffering and wrongful death have not healed,
once again we see the shadow of death hanging over us.

O God, hear our prayers of lament and repentance!

We lament the foolishness of humanity,
which despite the experience of two world wars in the 20th century,
is still caught in the vicious cycle of increasing wars and weaponry.

We repent that human greed and selfishness has led us
to pour astronomical amounts of money and resources into the arms race,
even as countless children are starving to death in our global village.

Awaken us to realize
that our true security lies not in nuclear weapons
but in trusting you and respecting our neighbors.

O God, who watches the empires rise and fall!

Grant wisdom to our governments and corporations,
that they may turn away from their worship of the idol of unlimited economic growth,
which makes the strong prey on the weak.
May they instead choose the way of cosmic truth:
the life of conviviality with all living beings, humans and nature.

As we confess and repent of our sins of greed and consumerism in  pursuit of nuclear power, grant us humble hearts and simple lives.
Awaken us to know
that true wealth is found not in the accumulation of material goods
but in a creative, sharing life.

May we learn that nuclear weapons and nuclear energy are not compatible with peace.
Lead us to be free from nuclear preoccupation.
Awaken us to know that our true strength is not in nuclear power but in love and justice.

Grant us the courage to go through the narrow gate that leads to life,
not the wide gate that leads to destruction (Mt 7:13-14).
May we leave to our children not a painful and terrible heritage, but a life that uses natural energy from your created sun, wind and water.

O God, lead us Korean Christians
not to export nuclear power plants, an act that is contrary to your command of justice and love, but to live as your apostles of peace, teaching your life and peace.

Remembering that on the cross our Lord shared the suffering of the nuclear radiation victims,
and hoping that a new heaven and new earth of life and peace may be realized
from Mount Halla in the south to Mount Paekdu in the north,
throughout Northeast Asia and all the earth,
we pray in the name of Christ Jesus. 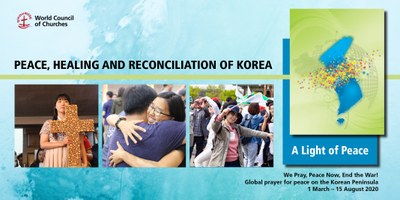 A new World Council of Churches (WCC) publication, “The Light of Peace – The Churches and the Korean Peninsula,” is offering WCC member churches resources for understanding and reflecting on 70 years of unresolved conflict on the Korean Peninsula during this anniversary year, 2020. 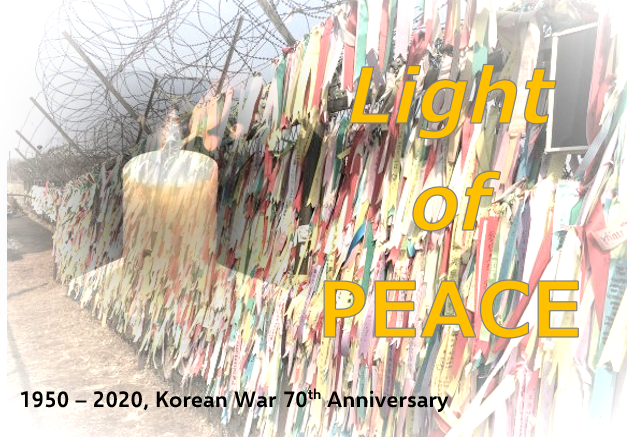 A Joint Ecumenical Peace Message for the occasion of the 70th anniversary of the start of the Korean War was publicly delivered on 22 June during a live-streamed event. Co-sponsored by churches and councils of churches around the world, especially from countries that participated in the Korean War, the message describes the Korean War as an “appallingly destructive conflict” after which no peace treaty was ever concluded.

Posted on News by Global Ministries (Disciples of Christ and United Church of Christ) · March 31, 2020 4:37 PM

Read the original and full article by the World Council of Churches here.

During the COVID-19 crisis, the church serves the spiritual and social needs of people afflicted by the pandemic which is gripping the world, and its key role was highlighted by the World Health Organization (WHO).

The Journey to Haenam: Teaching English

Thomas Smith is serving in Korea which is categorized as a Level 3 country dealing with the COVID 19 virus. Global Ministries has been in regular contact with both Thomas and the partner and received this note about his well-being:

As you must be already following the news, the COVID 19-situation in Korea is getting serious. There are numerous actions taken and many international gatherings cancelled or postponed in Korea.

Thomas, who is doing his volunteer work in Haenam (Haenam Yanmuri Church), in the field of English Ministry, is adapting and enjoying his work! Haenam, is noted as one of the ‘clean zones’ of South Korea without any positive diagnosis on COVID 19. Last weekend, our whole department went to Haenam in order to show our support to the congregation and especially to Thomas. We all shared the impression that he was ‘in his element’!

Churches worldwide are invited to pray for peace on the Korean Peninsula from 1 March to 15 August. During the "Light of Peace" campaign 70 prayers and stories will correspond with a commemoration of 70 years since the Korean War in 2020. In cooperation with the National Council of Churches in Korea, prayers will be published online each week.