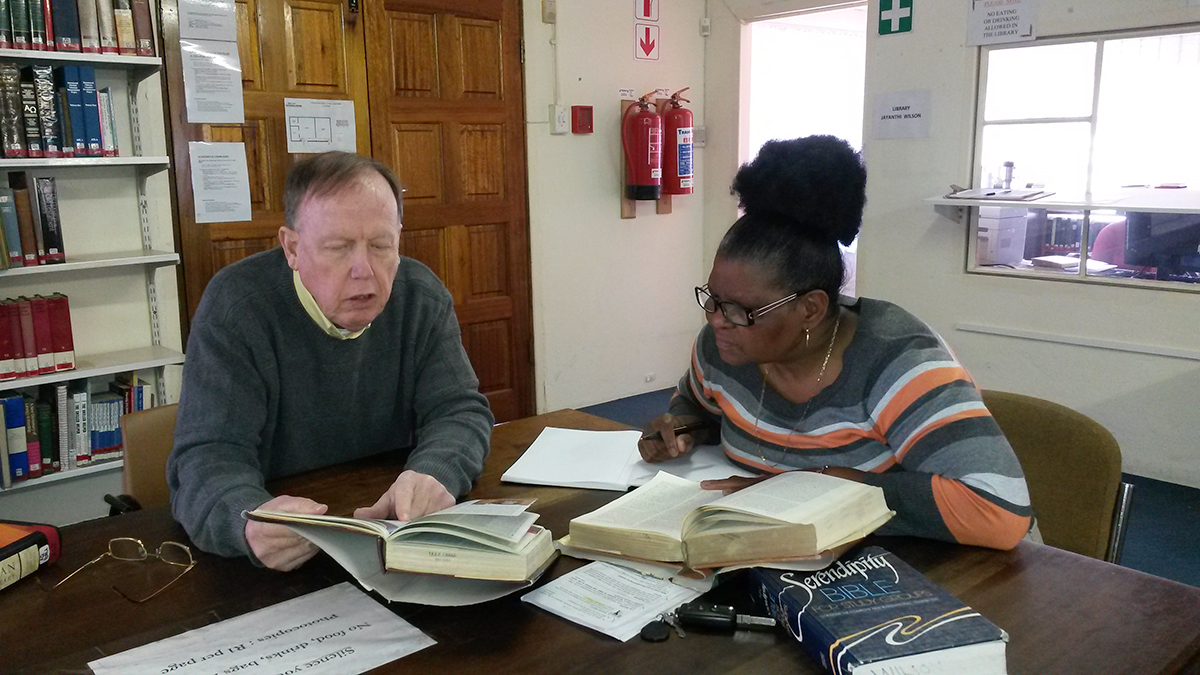 Help us as your people, to gain greater clarity of what it means to be your children; servants in the manner that our Lord Jesus taught, to put aside the doing of things because we might think that we will get “double in return”......putting aside thoughts of “you scratch-my-back and I will scratch-your-back.” Help us to glorify you, O Lord, help us to be thy servants. Help us to use our time and energy to be a good friend to others in need; and to understand that commitment to you means not only words, but also doing things with our whole heart, mind….and everything that is in us.

We pray especially today for the people of South Africa and those groups and organizations trying to make a difference for the better - Ons Plek, South African Council of Churches, the United Congregational Church of Southern Africa (UCCSA) - both the South Africa Synod as well as the regional body and Theological Education by Extension (TEE) College.

Lord Jesus, we give thanks and praise to you as a source of our strength, that keeps us on a steady path and who lifts us up when we stumble and sometimes lose our way.

White supremacy through Apartheid undermined education for people of colour in South Africa.  Likewise, Apartheid decimated theological education, closing school after school and thus weakening the church’s capability to mould its ministers.  Despite the new democratic dispensation, ministerial formation continued to weaken as universities closed theological faculties across the country.  Nonetheless, twenty years after Nelson Mandela became President there are signs of a budding recovery.  One such place where hope blooms is at the Seth Mokitimi Methodist Seminary in Pietermaritzburg, South Africa.

The June 2015 Newsletter of the UCCSA

“And the Lord shall guide thee continually. -Isaiah 58:11 KJV

When we arrived in Kuruman, Northern Cape, South Africa to serve at the House of Ministerial Formation, located on the grounds of the historic Moffat Mission, in January 2014, we saw it as our last assignment prior to retirement in 2017. We were really excited at the prospect of serving the Church- ministerial candidates from the United Congregational Church of Southern Africa (UCCSA) in their pursuit of a theological education. Jayanthi worked as the librarian at the Moffat Mission library, organizing and cataloguing the theological book collection and assisting students with research. I, as the Director of Ministerial Formation, served as chaplain, tutor and administrator of the school. Jayanthi and I considered it a privilege to have worked in a cross-cultural and Christian setting with men and women from Southern Africa- Zimbabwe, South Africa, Botswana, and Mozambique. We had times of fellowship and research as well as times of great joy and sadness. As said earlier, this was to be our last assignment before retirement. Nonetheless, our work as missionaries is not about “us.” It’s about serving Christ Jesus and the Church. The United Congregational Church of Southern Africa chose to close the school at the end of 2014 as part of a restructuring of its ministerial training programme. The decision both changed and challenged us.

The World Council of Churches (WCC) has taken a clear stand against recent violent attacks against migrants in South Africa, reaffirming churches’ positions against racist, ethnocentrist and xenophobic acts of violence.

Noting the special vulnerability of migrants and migrant workers, a statement issued in Geneva on 24 April by the general secretary of the WCC urges leaders in South Africa, as well as in other countries in the region, to promote the observance of human rights at all times.

You hypocrite, first take the plank out of your own eye, and then you will see clearly to remove the speck from your brother’s eye.  Matthew 7:5 (NIV)

As xenophobic attacks continue in South Africa, the United Congregational Church of Southern Africa responds with a statement of support for those affected, a call for the church and greater society to address the underlying issues leading to the violence, and a request for prayers as South African society grapples with these issues.

We are First Africans and then South Africans

In Alexandra, a township near Johannesburg, South Africa, Mr Emmanuel Sithole, an African foreigner, pleaded for his life.  He is a Mozambican who was the latest victim of xenophobic attacks in South Africa.  Mr Sithole was stabbed several times, taken to hospital by the journalist team who witnessed the attack and later died in hospital.  The accused caught on camera were charged in court with murder.

Changes, but many things remain the same

While many things have changed, many things remain the same for our family.  Such is 2015, as compared to 2014.  Susan continues to serve Inanda Seminary as its chaplain and Scott continues to serve Inanda Seminary, Seth Mokitimi Methodist Seminary (SMMS) and the University of KwaZulu-Natal’s (UKZN) School of Religion, Philosophy and Classics. Susan has fulfilled her role as chaplain for 15 years, yet her portfolio continues to expand.  Susan teaches life orientation, an important curriculum within South Africa that seeks to teach students real life lessons on finances, career choice, sex education, psychology, social relations, emotional health, home economics, pluralism and civics. Susan and Inanda Seminary provide a life-long spiritual grounding from which the students can resource throughout their lives.  Always anticipated themed weekday chapel services and Sunday worship services remind students of their God-given potentials.  Inanda Seminary is excited to be planning the launch of Inanda 2, a ‘franchising’ of sorts of quality faith-based education first provided by American missionaries more than 146 years ago.  Susan will play a large part in transferring the ethos of Inanda Seminary to the new school.