How would you describe the mission of our partner in Morocco?

The Evangelical Church in Morocco is made up almost entirely of foreigners – students in Morocco for their studies, expatriates who have found work in the country, and migrants in the country seeking better opportunities than were available in their home countries – and is the main representation of Protestantism in Morocco. Their goal is a unified body with incredibly diverse backgrounds.

The Church also works through its Comité d’Entraide Internationale (CEI), which works for the care of and advocacy for the refugees and migrants of the country. Morocco is separated from the southern tip of Spain by less than ten miles at the Strait of Gibraltar. In fact, there are two Spanish cities on the African side of the strait which are basically small patches of Europe. For most anyone trying to reach Europe from Western Africa, this represents the shortest passage. Unfortunately, it is often not easy, and a large population of migrants and refugees end up in Morocco with nowhere else to go. Projects such as medical care, scholarships, food and shelter assistance, and job training all factor into this mission.

I work on enhancing public communications, including work in social media, production of website content, and development of informational resources for newcomers to Morocco. I also work in a more hands-on capacity as a frequent member of the CEI teams in both Casablanca and Rabat.

All my life I have been incredibly bothered when I see someone not being treated fairly. As I grew up and continued my education, I began to see what this looks like both nationally and globally. I started to develop a passion for justice and equality, especially on an international scale. I believe that human rights are universal. No matter a person’s background, that person should be given the chance to live a comfortable and fulfilling life. Unfortunately, humans often try to lay exclusive claim to rights based entirely on factors that are determined by luck at birth. Gender, skin color, nationality, sexual orientation, family resources – these are all examples of factors that people are born with through no choice of their own, though some would have them used as criteria to decide who is worthy of certain human rights.

What are some of the challenges facing the people of Morocco, our partner, or yourself?

One major challenge is maintaining unity and consistency in the face of incredibly diverse backgrounds of the Church’s membership and the fact that this membership has an unbelievable turnover rate of about 25% annually. The Church constantly strives to unify and satisfy almost the entire theological spectrum in one body, but the differences in tradition and practices can be difficult. In addition, as a minority religion composed almost entirely of foreigners, it is important to learn how to live in harmony with the vast Muslim majority in Moroccan society.

There are also numerous governmental and societal forces which work to oppress migrant and refugee populations in the region. Crossing into Europe is commonly seen as a stepping stone to a better life, though doing so is not easy. Those who stay in Morocco, either intentionally or because they have been continually denied entry into Europe, often face a bleak job market and a culture very different from their own.

In the United States I got used to church groups being controlled by an older generation of people who already have their lives pretty much figured out. Here in Morocco, the CEI – the group that handles the church’s work with migrants and refugees – is made up almost entirely of people in their twenties. These people are often students; they are living in cheap apartments, doing homework, looking for jobs, and worrying about relationships – things that I think most American young adults can relate to. However, they also find the time to work with those less fortunate than themselves, and to collectively take responsibility for how their church is going to act. All age groups have something important to contribute, even if it is easy to find excuses not to. 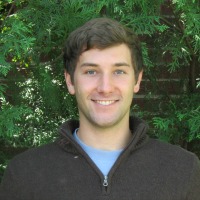 Make a gift that supports the work of Tyler Reeve