"70 Years On: Seeking a Hopeful Future in a Time of Yearning"

[On May 13, the following ecumenical statement was issued on the 70 years since the establishment of the State of Israel and the Palestinian Nakba ("catastrophe").  Signatories included the Christian Church (Disciples of Christ) and United Church of Christ.]

Over the past several weeks, the world has witnessed the assertion of rights by the Palestinian people of Gaza—rights as refugees, rights as human beings, and rights as a people living under foreign military control. The largely nonviolent demonstrations have brought attention to the Palestinian presence and circumstance, as well as to the lethal Israeli military response with which the protestors have been met. 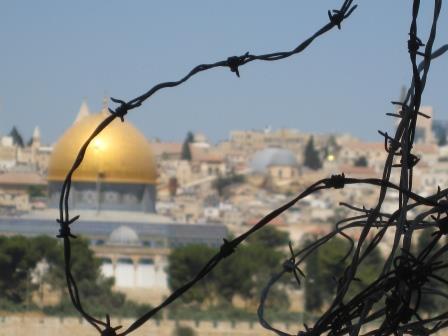 The demonstrations were planned to continue until May 15, which Palestinians commemorate as Nakba (“Catastrophe”) Day, remembering the displacement and dispossession of more than 750,000 Palestinians following the establishment of the State of Israel on May 14, 1948, creating the refugee population which, with their descendants, now includes at least 5 million people living in Gaza and the West Bank, Jordan, Lebanon, and Syria. These several weeks have therefore also lifted global awareness about the Palestinian people’s history, rights, calls for justice, and hopes for peace.

In the seventy years since its founding, Israel has achieved high levels of success by and for most of its citizens in a variety of areas: economy, technology, international commerce, arts, and culture. It has gained the support of and developed close relationships with countries around the world, including the United States. As Israel celebrates its 70th birthday, many of its population—and indeed the global community—will focus on those successes and achievements.

At the same time, for Palestinians who have no opportunity to exercise their internationally-recognized right of return or receive compensation for their losses, the military occupation of Gaza and the West Bank, including East Jerusalem, as well as systematic discrimination, are manifest realities in daily life. Continued settlement construction means illegal appropriation of property and further dispossession of Palestinians from their lands and homes. Restrictions on movement, including lack of access to Jerusalem and other places of Palestinian heritage and family residence, are regularly imposed on the Palestinian population. Palestinian children face ill treatment through the Israeli military court system. Today, in the geography of Israel and the occupied Palestinian territories, there is rough parity in numbers between Israeli Jews and Palestinians, but half of the people are denied sovereignty over their land, full benefits of citizenship in a state, and/or equal rights.

For us as US churches and ecumenical organizations, the reality of life is repeatedly and consistently shared with us by our closest partners, the Palestinian Christians, their churches and institutions. Their voices echo that of the broader Palestinian society. They speak with authenticity and honesty of the deplorable conditions of occupation and inequality in which they live; they yearn with great hope for a day when they will know the justice that is promised for them; they pray fervently for peace and for an end to the conflict, occupation, and dispossession; and they call out with clarity for people of conscience, particularly the global church and people of faith, to take action in support of their calls.

In the US, we confess that we have not always done all that we can to amplify the voices of Palestinians and Israelis who seek justice and equal rights, and who support an end to violations of human rights and human dignity. Even so, we commit to persevere in our efforts to promote peace with justice, and equality of rights for all.

We know that our own government’s seemingly unqualified and unquestioning support for Israel is a significant enabling factor for Israel’s continuing and repeated violations of international conventions and laws. The US’s unequaled military aid to Israel, its regular defense of Israel in diplomatic arenas, especially the UN Security Council, national and state efforts to criminalize the use of economic measures as a moral act, US support for the blockade of Gaza, and the move of the US embassy from Tel Aviv to Jerusalem, are but some of the ways the US has acted without regard to Palestinian rights.

We will continue to raise our voices in the halls of our government to change our government’s policies and to end injustices so that there is freedom, justice, equality, and security for both Palestinians and Israelis. We will remain steadfast in calling for an end to violent acts by individuals, groups, and states. We will reinforce our leadership in support of solutions that consider the peace and well-being of all peoples.

The Psalmist laments and cries out, “How long, O Lord? Will you forget me forever?” Palestinians have long asked “how long?” and looked for signs that they are not forgotten. The prophet Jeremiah’s message conveys God’s promise of hope during a time of yearning for home, for Jerusalem. Jeremiah offers comfort that God’s plans guarantee the welfare of the people, and a future of hope. Seventy years of displacement and dispossession, half a century of occupation, and generations of yearning are enough. We trust in God, that the hope the prophets foretold is not only a promise for all of God’s children, but will be realized, and we pray—and recommit to working—for the realization of God’s justice and peace for all peoples.