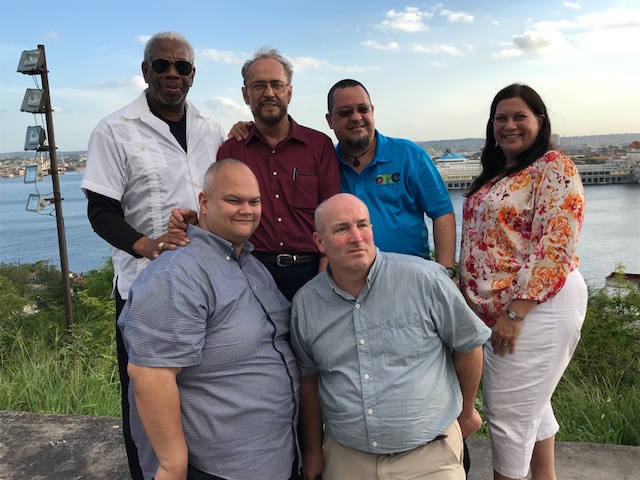 A Global Ministries delegation celebrated the 500th anniversary of the Reformation with friends and partners in Cuba, as part of a journey to deepen relationships between churches in the two countries. Eight clergy from the United Church of Christ and the Christian Church (Disciples of Christ) spent nine days in Cuba from Oct. 25-Nov. 2 meeting with partners, as part of the Caribbean Initiative.

"We want to connect our constituents more closely with our partners, to find ways to proceed in, to continue to build a mutually beneficial relationship," said the Rev. James Moos, a UCC national officer and co-executive of Global Ministries, the common overseas ministry of the United Church of Christ and the Christian Church (Disciples of Christ).

This traveling party, like an earlier Global Ministries group which previously visited Colombia in May, supported long-standing relationships with their presence as part of the Caribbean Initiative.

The delegation, which included Moos, Global Ministries Co-Executive the Rev. Julia Brown Karimu, the Rev. Angel Rivera-Agosto, Global Ministries executive for Latin America and the Caribbean, three UCC conference ministers and two DOC regional ministers, spent time with four partners in Cuba; the Cuban Council of Churches, the Christian Pentecostal Church of Cuba, the Martin Luther King Center, founded in 1987, which promotes Christian social responsibility and change in the Havana area, and The Evangelical Seminary of Theology at Matanzas, the only ecumenical seminary in Cuba. The Methodist, Presbyterian, and Episcopal Churches founded the Matanzas Seminary on October 1, 1946.

"We have strong partnerships with vibrant church bodies," said Moos, indicating much can be learned from them. "The Cuban churches have a distinctive theological perspective. They are entrenched in community involvement, highly engaged – they are committed to serving the elderly and reaching out to the young."

The delegation flew to Holguin, a city on the eastern part of the island, and made stops in Bayamo, Los Tunas and Santiago, before heading to Havana and Matanzas.

"What made this experience different from others," said Rivera-Agosto, "we had the opportunity to experience the devotional and ministerial life of our partner church in Cuba. The Christian Pentecostal Church opened its doors to us to experiment the flowing and the experience of the Holy Spirit in the midst of a society that suffers the constant threat by the 'powers that be' 90 miles away from its coasts. We could engage in in-depth dialogues with the pastors, lay people, women, and youth. We were there to listen. We were there to experiment - what does it mean to be a church in a Cuban context?" 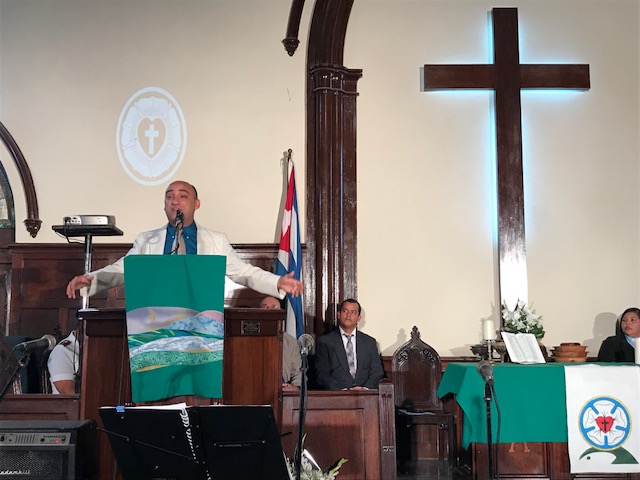 While in Cuba, the delegation participated in several commemorative events marking the 500th anniversary of the Reformation, including a large worship service on the actual anniversary date – Oct. 31 – held by the Cuba Council of Churches and broadcast live on state TV.

The group, which had a meeting with the Religious Affairs Office of the Cuban Communist Party, also had an opportunity to attend an exhibit on religion and the arts, and a gathering with the Union of Cuban Artists and Writers which sponsored an event comparing Hebrew and Cuban poetry.

"We experienced the beauty of the people along with the cultural dynamics within the country that was rich and culturally diverse. Its history and its people are interwoven in a majestic legacy," said the Rev. Edward Davis, UCC Southern Conference Minister. "I want the UCC to know that church life in Cuba is vibrant, spirit filled, passionate and faithful. One of the strongest religious presences in Cuba comes from a religion that is not institutionalized and comes from within the grass roots of the people reflective of the Cuban culture and identity."

During their discussions with the Cuban people, low wages, and the continuing United States trade embargo, or more specifically economic blockade, were named as huge burdens. 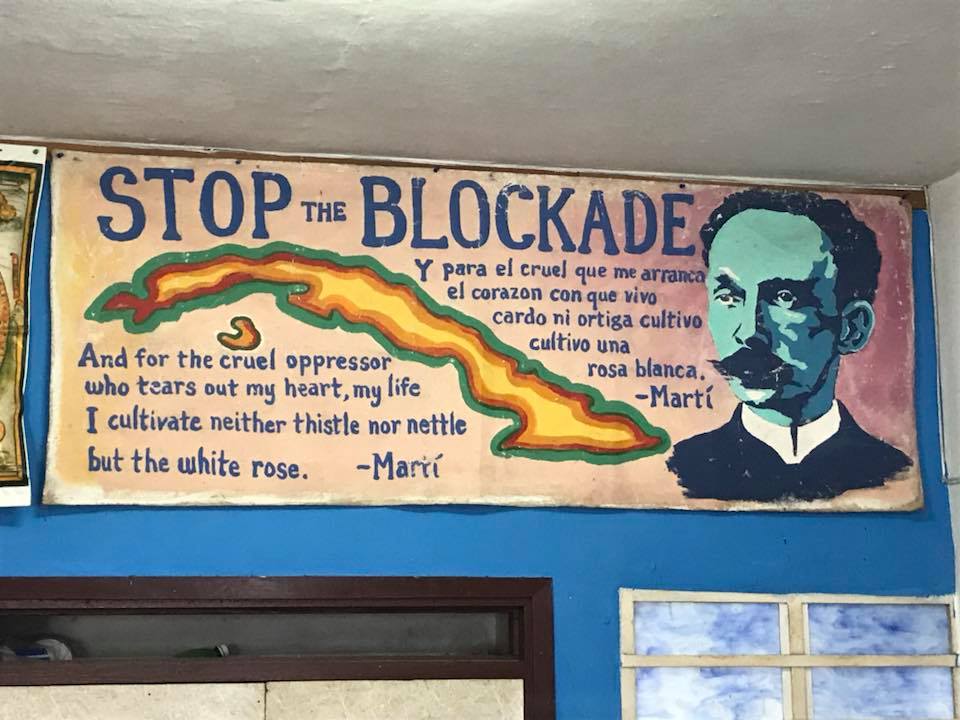 "What the U.S. has imposed on Cuba throughout the years is an economic blockade, not an embargo," said Rivera-Agosto. "An embargo establishes the seizing of property by the owner to safeguard his right to proceed with the claim of what is owed to him.  A blockade is an act of either war or violence to force those affected by it to do what the blocker wants him/her to do. In the specific case of Cuba, the U.S. has imposed a restriction of trade, not only with U.S. institutions but also with foreign ones, to force the island to conduct specific policies in violation of Cuba's right of self-determination and sovereignty. So, the blockade is designed to cut the air and not letting the Cuban economy to grow and develop the way its citizens need to be."

This summer, the UCC General Synod passed a resolution that calls for an end to the blockade against Cuba, and advocacy for full normalization of relations between the two nations. The Trump administration remains opposed to both issues.

In fact, on Wednesday, Nov. 8, the United States government released new restrictions that will make it harder for Americans to go to Cuba, and tougher for U.S. businesses to work there.

Among the people of Cuba, the steps backward in U.S. policy the Trump administration are taking are huge concerns. This year, there's been a freeze in diplomatic relations, the recall of personnel from the U.S. Embassy, and the tightening of travel restrictions, which already make it almost impossible for Cubans to come here.

"There is a new and unbearable requirement for Cubans to get the U.S. visa. They have to fly and apply for it in Colombia, "said Rivera-Agosto. "There are regulations that impose further screenings on travels by U.S. citizens to Cuba. To summarize our recent experience on traveling to Cuba in the Trump era, I can say that, unfortunately, this administration has returned to the Cold War rhetoric against Cuba."

"The Southern Conference was privileged to be the Conference that sponsored the resolution at General Synod," said Davis. "As a denomination committed to justice work, we should continue to advocate on behalf of those who are oppressed and who are the systemic victims of the blockade."

"Our task would be to continue our work on two main fronts," said Rivera-Agosto. "First, to educate our communities about the severe impacts of the economic blockade to Cuba.  Second, to keep advocating in the U.S. Congress and federal authorities about the need to eliminate the laws that govern that blockade against Cuba."

As Moos said, "We want the people of Cuba to know that we are committed to walking together in a mutual partnership so the blockade comes down for the sake of all people and so that families can be reunited."