'One Country, One System' in Hong Kong?

A journey that began for 14 youth last August ended at the beginning of February when the third, and last, one-month module of the seventh School of Peace (SOP) conducted by Interfaith Cooperation Forum (ICF) concluded in Siem Reap, Cambodia. Like ICF’s last SOP in 2013–2014 in Sri Lanka, this SOP had a gap of several months that allowed the participants to put into practice in their own communities in Cambodia, China, East Timor, Indonesia, the Philippines and Vietnam what they had learned in the first two modules in August and September. Like previous SOPs, the program sought to sensitize the participants to the various identities that all people have based on gender, race and ethnicity, nationality and religion and the ways in which one’s identity today can become a source of conflict. Discussions also revolved around how people respond to conflict with engagement of “the other” through dialogue promoted as a non-violent means to reach a consensus on how to address disputes. In the final module, the emphasis was on transformation of first we as individuals and then our communities and societies.

During the last SOP module in January, I conducted a session on human rights that highlighted the development of human rights over a period of centuries that culminated in the creation of the U.N. human rights system in the 1940s. We also discussed people’s basic human rights, such as the right to education, food, housing, etc., and freedom of expression, association and assembly, religion and other civil and political rights. Two former SOP alumni from Cambodia that we have been training as human rights resource people for the past several years led sessions focusing on the rights of women and of children. We shared as well about the political, socio-economic, cultural and systemic obstacles, such as corruption and impunity, and institutional failures that impede people’s enjoyment of their rights. Lastly, we stressed the importance of the documentation of human rights violations and ways to use this documentation for analysis, education and advocacy, and we highlighted the use of community organizing to protect people’s rights and how the participants can use the internet to monitor the human rights record of their government through the U.N. human rights system.

In Hong Kong, concerns in the community have centered on five missing booksellers of Causeway Bay Books, a local bookstore that specializes in books critical of the Chinese Communist Party (CCP) that mainland tourists often visit to buy books that aren’t available in mainland China. The disappearances began on Oct. 17 when Gui Minhai went missing during a vacation in Thailand. Three others connected with the management of the bookstore vanished within the next 10 days during separate visits to Shenzhen across the border with mainland China. The last person to disappear was Lee Po on Dec. 30 in Hong Kong.

Since then, Gui and Lee have resurfaced on the mainland with Lee telling his wife in a letter on Jan. 4 that he had “returned to [the] mainland [his] own way and [was] working with the concerned parties in an investigation which may take a while.” Meanwhile, Gui appeared in a video on Jan. 17 stating that he had turned himself in to mainland authorities for violating the conditions of a two-year suspended sentence he received in a fatal traffic accident in 2003 caused by drunk-driving. Both Lee and Gui reappeared on the mainland though without any immigration record of them leaving Hong Kong and Thailand respectively and entering China. Consequently, it is believed in Hong Kong that they were both abducted and taken to mainland China by security officers of the Chinese government. As for the remaining three booksellers, there has been no information about their whereabouts since October.

If Lee was, indeed, abducted in Hong Kong by the Chinese authorities, this development would be a grave breach and threat to the principle of “one country, two systems” enshrined in the Basic Law, Hong Kong’s mini-Constitution. Among the pillars of the “one country, two systems” principle is that Hong Kong has its own police force and maintains its own immigration and legal systems. It appears that Hong Kong’s system was ignored in the case of Lee, and moreover, there has been little cooperation by security officials in China with the Hong Kong government and its police department. The worrying trend exemplified by the Lee case and that of the other missing booksellers is that Hong Kong is becoming merely another city in China and that “one country, one system” is becoming the new reality for people in Hong Kong.

Bruce Van Voorhis serves as missionary with the Asia and Pacific Alliance of YMCA’s in Hong Kong. His appointment is made possible by your gifts to Disciples Mission Fund, Our Churches Wider Mission, and your special gifts. 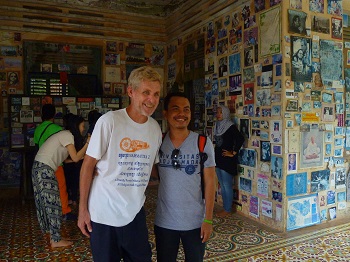 Bob Maat, a former Jesuit priest from Cleveland, Ohio, who has lived in Cambodia for 36 years working for peace and reconciliation, poses for a photograph with SOP participant Ade Nuriadin from Indonesia during a field visit. Maat has transformed the porch of a mausoleum in the compound of a Buddhist temple where he lives simply into a peace center filled with peace-related posters. Maat began his journey with the Cambodian people as a physician’s assistant in the Cambodian refugee camps in Thailand and has been involved in the annual Dhamma Yietra, a Buddhist walk for peace that has been held annually in different parts of Cambodia since 1993. (Photo by Bruce Van Voorhis)