A Church in Crisis 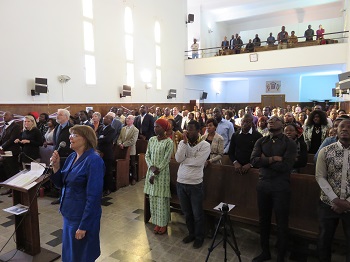 The Protestant Church in Morocco (Église Évangélique au Maroc, or EEAM) is a church in crisis. This is not a negative thing – a crisis is simply an important moment or a turning point, and that is exactly what the EEAM is experiencing right now.

After declining almost to nonexistence after Morocco’s independence from France (and the subsequent exodus of many French citizens), the church began to grow again in the 1980’s with the arrival of the first sub-Saharan African students coming to Morocco for their university and graduate school studies. It has grown steadily ever since as more and more students come from elsewhere in Africa and find a home in the increasingly diverse ranks of the only officially recognized protestant church in the country. A church started by European colonists is now more than 90% African.

In a time of personal crisis, one raises existential questions. Who am I? Where do I come from? What do I stand for? The same is true of the church.

After a change in leadership and important questions arising about how the church should function in the face of significant cultural changes and continuing membership growth, everyone is in a period of reflection and self-examination. The church is blessed to be growing in size and enthusiasm, but it is outgrowing the structures and resources that are in place. There are always growing pains in a situation like this, but it is generally understood that this is a chance to prayerfully and intentionally shape the future of the church.

The Al-Mowafaqa Ecumenical Theological Institute, started in 2012 in collaboration with the Catholic Church in Morocco, has among its students some who have received scholarships through the EEAM and have been working part-time as pastoral interns in various EEAM congregations around Morocco. The first class of these students will graduate next year, and the Church is currently looking for a solution as to how to afford to keep even some of them as full-time pastors after their impending certification.

All of this exists within the context of a country that is gradually becoming a very welcoming place to foreign Christianity. Last year, the National Archives of Morocco requested the archives of the EEAM to incorporate into the National Archives. This was received as a significant step forward in the level of integration and acceptance of the foreign Christian community in Moroccan society. These archives date back to the 1920’s and trace the evolution of the Church through the years, and due to the magnitude of the project they are still being sorted through to be submitted.

There was also an event recently held in Morocco which will have repercussions throughout the Middle East and around the world. A conference of about 300 religious leaders and scholars from 120 different countries was held in Marrakesh to discuss the treatment of religious minorities in majority-Muslim countries, and the president of the EEAM, Rev. Karen Thomas-Smith, was invited to address the assembly. The fruit of this gathering was a document, simply called the Marrakesh Declaration, which discusses Islam’s historical foundation for dealing with people of other religions and how it is best applied to the present. It refers frequently to the Charter of Medina, written by the Prophet Mohammed, but also discusses current events within the Muslim world. The abject condemnation of violence and the promotion of peace as a foundational principle of Islam, as well as the call to live in local and global community, are expressed in a way that Christians can wholly identify with despite the difference in source material.

The situation facing the Protestant Church in Morocco is different from what it has ever been. While all churches are called to evolve, the EEAM and its surroundings are going through a critical period of significant development. But crisis is opportunity, and the focus is on the future. There is a feeling of optimism in the face of the long-term implications of the decisions being made. With the hope and wisdom that comes from unity in Christ, the EEAM will emerge stronger than ever.

“Peace is the basis of compromise, trust, and coexistence between individuals and societies, irrespective of people’s beliefs or socioeconomic status.” (Marrakesh Declaration, page 9)

Tyler Reeve serves as a Global Mission Intern with the Evangelical Church in Morocco. His appointment is supported by Week of Compassion, Our Churches Wider Mission, Disciples Mission Fund and your special gifts.