A Day to Rejoice!

“Rejoice in the Lord always. I will say it again: Rejoice!”  (Philippians 4:4) 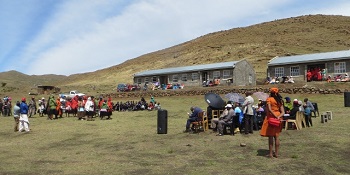 More than a mile before we reached our destination, a group of men on horseback from the village were waiting to escort our vehicle to Bolahla Litau Primary School.  It was a day to rejoice!  The occasion was the official opening of the new buildings which were completed in July 2014.  The buildings have been in use for over a year but delays in getting toilet facilities built held back the celebration date. 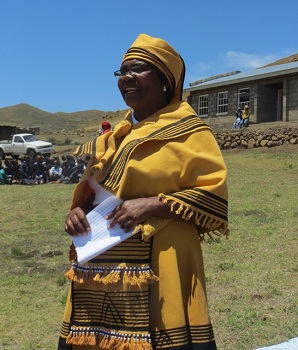 We were greeted and welcomed by the school principal, Mrs. Mathuso Mafa, and the chief of Bolahla Litau, Mr. Seahle Letsie.  Many women of the village, like Mrs. Mafa, were beautifully dressed in colorful cultural attire.

The day of thanksgiving began with a service of worship, followed by a series of speeches, as is typical of such occasions.  Representatives of the community, parents, school board, church, etc. shared remarks and expressed words of thanks.  Also speaking were district education and government officials, as well as the area Member of Parliament.

The school choir sang several times and the village women performed a cultural dance.  By mid-afternoon, after a ribbon-cutting ceremony and the benediction, it was time to eat and there was plenty of food for everyone!  No effort was spared by the community to express their appreciation and make the day one that will long be remembered. 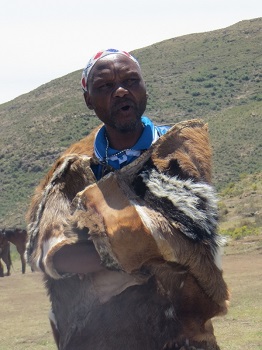 In my August newsletter I wrote about a possible classroom construction project at Qiloane Primary School, which, like Bolahla Litau, is a school of our partner church here, the Lesotho Evangelical Church in Southern Africa (LECSA).  Rejoicing is taking place there, too, as work is now underway for a new classroom block.  Classes for the current academic year will end later this month but the students can see that work has started and will no doubt be checking the progress during their break.

Although the Bolahla project took much longer than anticipated, that made the rejoicing all the more heartfelt!  And even when there are problems along the way, as each one is overcome, there is reason to give thanks and rejoice.  Paul did not tell the Philippians to rejoice sometimes, but always!  So even when we are heartbroken and downtrodden, we still give thanks for God’s love and mercy as shown to us in Christ Jesus.

Besides rejoicing, Paul also encouraged regular prayer:  “Be joyful always; pray continually; give thanks in all circumstances, for this is God’s will for you in Christ Jesus.”(1 Thessalonians 5:16-18). Here in Lesotho prayers are especially needed for:

Please join in prayer with the leaders and members of the LECSA.