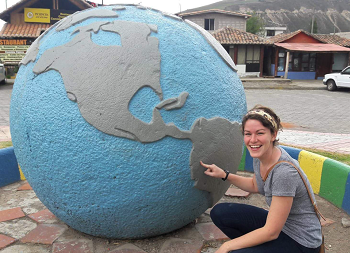 I arrived in Ecuador in November, 2016. My first few weeks were spent learning the history of FEDICE and getting to know the general work and mission of the organization. FEDICE (Fundación Ecuménica por el Desarrollo Integral, Capacitación y Educación or, in English, the Ecumenical Foundation for Integral Development, Training and Education) works predominantly with indigenous people in rural communities in the Andes mountains to empower and to break the cyclical chains of poverty, discrimination, and injustice. Easier said than done, right? In the case of FEDICE, wrong! FEDICE has worked for over twenty years to bring about real change in rural communities and they have made a huge impact on the communities they serve.

One such community is El Chaupi, more than two hours south of the FEDICE offices in Quito, with the last 30 minutes of driving being up a dirt road of switchbacks sporting incredible views from 10,000 ft. above sea level. FEDICE has worked with El Chaupi for more than 10 years. After the initial contact was made with the community, FEDICE worked with a group of local women to create a credit and savings union. FEDICE helped the women to set up their own organization, trained the people who were

elected to lead the organization, and gave them a computer and taught them how to use it so that the whole community benefited. FEDICE then loaned each woman in the organization a small amount of money at a low interest rate so that they could buy animals to raise and sell. A FEDICE team member taught the women what to look for when buying animals and after the animals were bought, continued to teach monthly classes about taking care of them and how to build a healthy living environment for the animals. In addition to the interest acquired by FEDICE, the organization itself decided to require a small monthly contribution that would be kept in the credit and savings union, so that when a member was interested in starting a new business, or updating something that cost more money, they would be able to borrow from themselves at a lower interest rate than what the bank would offer. Once the project was complete, the money + interest would go back into the credit and savings union to provide funds for the next community member who needed it. This interdependency is key to the success of the organization; the women know that they are all contributing to their organization and that if any of them needs support, they’ll be able to receive it and achieve it together.

FEDICE has continued to loan money to the women of El Chaupi at increasing increments over the past 10 years. Now, the organization has a computer that a number of women know how to work, they have significantly raised the standard of living because they had more opportunities to make money, they are healthier because of the products that come from their animals, they are working towards gender equality in the community by giving the women a sense of purpose and more control of their livelihood, and they have a stronger sense of community, so that their children are able to get better educations and have more options in their lives.

And El Chaupi is only one of more than 30 communities FEDICE has worked with in the past 23 years.

When I first visited El Chaupi, I was struck immediately by the hospitality, organization, and companionship that emanated from this strong group of women (and a few men). They were so excited to meet me, as a new volunteer at FEDICE. They seemed relieved when they discovered that I spoke broken Spanish and told me they would teach me to milk a cow. I could tell that this group of women knew each other well and were comfortable expressing themselves. I could also feel the confidence of each and every woman.  This confidence seemed new to them, something that had been acquired in recent years because of new opportunities and newfound strengths; it was the kind of confidence that is hard-won and comes directly from a strong feeling of self-worth.

This meeting in El Chaupi took place less than two weeks after I arrived in Ecuador and was my first visit to any of the communities FEDICE works in. My Spanish was bad, I was still finding my place at FEDICE and getting to know the rest of the team, and I was just beginning to feel the effects of an illness that would plague me for the next month and a half. But there I was, surrounded by all these confident women who carry their babies in cloth wraps on their backs like a backpack, who milk their own cows, and butcher their own pigs, and know how to give antibiotics to their chickens when they get sick, women who had talents and more grit than I ever expect to acquire in my lifetime. I was inspired. I felt like I was a part of something bigger.

And that was only the beginning.

Over the next few weeks I had the opportunity to visit other communities and learn about other projects that FEDICE helps to organize and fund. I learned about the awe-inspiring work that was being done and I learned about the difficulties of the work. I learned to listen more and speak less—not only because of my rusty Spanish, but because there was, and still is, so much to learn.

FEDICE is forever changing and adapting to the needs of the communities they work in, forever updating their practices and methods, and always holding the people of the communities at the heart of the work they do. As I begin this new adventure with FEDICE I am daily reminded what it means to love my neighbor. In today’s world, it is ever more important to adapt, to learn, to change, and most importantly, to love those who are different than us wholeheartedly.

Cara McKinney serves as a Global Mission Intern with the Ecumenical Foundation for Integral Development Training and Education (FEDICE). Her appointment is supported by Week of Compassion, Our Church’s Wider Mission, Disciples Mission Fund and your special gifts.