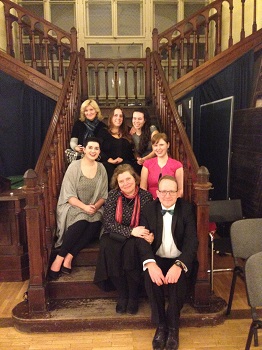 My placement in Budapest, Hungary looks much different than what many may initially think of when they hear that I’m serving the church as a missionary. My work is rooted in a deep sense of critical presence and accompaniment that are key to the relationships that I have developed here. This accompaniment is realized in a multitude of ways; some days I am literally accompanying someone to a meeting, other days I am accompanying the people that I serve in spirit as they go through a rough time, and a few months ago I was packed into a bus with international church guests as I accompanied them to the opening of the Reformed Church in Hungary’s 500th anniversary of the Reformation.

In Hungary, 2017 is also the 450th anniversary of the Debrecen Synod, a gathering that endorsed the Second Helvetic Confession and played a crucial role in the creation of the reformed church here. The RCH has quite a bit to ruminate on this year.

During this period of celebrating the Reformation and the Debrecen Synod, the mood in Hungary is one of both reflection and planning for the future. Reformed Christians in Hungary are asking themselves what exactly this identity means for them, what does it mean to be reformed in this particular context?

The end of January found me in the Hungarian city of Debrecen for the opening of the RCH’s Reformation celebrations helping to lead a large gathering of ecumenical guests. I was crowded into a large tent one morning, surrounded by a mixture of Hungarians and internationals, listening to speakers reflect on what being reformed means to them in their own context. Speakers from Hungary, Slovakia, Romania, Taiwan, Scotland, Lithuania, Germany, Spain, and Greece spoke about how they see the spirit of the reformation shaping their personal lives and the ministry of their church today.

I, like the Hungarians that I am surrounded by in my placement, have been doing a lot of meditating around what my reformed identity means in my current context and for my future. As I sat there, bunched up against other internationals, all layered up to fight the cold outside, something clicked – the Reformation is for all of us.

The first speaker to give a personal testimony about the reformation in their life was a dear friend of mine from Scotland who spoke in a fiery manner about how the Reformation was about spreading God's love to everyone, no matter their age, race, or background and how this is still a process that is happening today.

Up until my work in the Ecumenical Office to prepare for the celebrations, I had honestly never given much thought to my reformed identity. Intellectually, this idea that Reformation is for everyone made sense, but it was as if it didn't truly feel real until that moment - sitting in a tent surrounded by people from all around the world, united in our reformed identity and listening to one another's personal journeys.

The next speaker was a man from Taiwan and he focused on the idea that each individual can help to nurture the common faith that we have and that churches around the world must manifest the unity that we find in Jesus Christ. As he spoke in a calm and measured manner, I noticed that the Hungarian woman next to me was listening with rapt attention – much like I had listened to the woman from Scotland.

She had come into the speaker’s tent a bit late, all bundled up for the weather, but as she began to thaw out and listen to the testimonies, she became animated. As she listened to folks discuss unity in Christ and the profound ways in which being reformed has impacted churches all over the world she nodded along. She spoke no English, but eagerly looked back and forth between the translator and the guest who was talking, hungry to hear what would come next. She leaned forward, actively listening to these stories of transformation from places that she had probably never been, finding ways to relate to the speakers as their words touched her in her own context. The woman jotted down notes as the afternoon went on and made sure to write down the names of the ecumenical guests and their church denominations so that she could pray for them later.

Truly, reformation is for everyone regardless of language, socioeconomic background, education level, and anything else that people try to use to divide us in our everyday lives. The Reformation makes God's word accessible to all and, in doing so, strengthens the church for the future.

The Reformation, historically, has not always brought about unity, but it is my sincerest hope that in this year of reformation we find ways to connect to and learn from our reformed sisters and brothers around the world. May we strive to make manifest the love of God in the world around us, coming together with people of faith from all walks of life.

Kearstin Bailey serves as a Global Mission Intern with the Reformed Church in Hungary. Her appointment is supported by Week of Compassion, Our Church’s Wider Mission, Disciples Mission Fund and your special gifts.