Advancing the Human Rights of Persons with Albinism

June 13th was International Albinism Awareness Day. If you didn’t know it, be sure to put it on your calendar next year. To be honest, I wouldn’t have known it had I not walked past Mbandaka City Hall. After noticing the ceremonial set-up, I took a closer look at the banner hanging below the neatly arranged plastic chairs. The banner in French proclaimed “World Albinism Awareness Day, Theme: Accepting Persons with Albinism Because We Are the Same, Our Motto: Solidarity and Integration”. It was wonderful to see the city embrace the cause of battling the stigma of albinism, and officially locking arms with a minority population that is often spurned by the community. 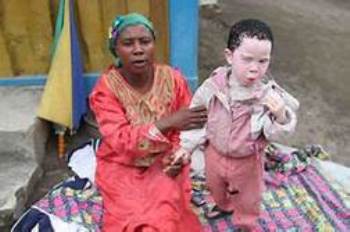 Albinism (the term “Albino” is considered derogatory) is a genetic disorder that robs persons of the pigment melanin in their eyes, skin and hair. Their physical appearance has made them targets of myths and beliefs that have marginalized them, and at times, threaten their lives.

In 2013, the United Nations (UN) Human Rights Council adopted a resolution calling for the prevention of attacks and discrimination against persons with Albinism. In 2014, the General Assembly adopted a resolution declaring June 13th as International Albinism Awareness Day. The observance is intended to broaden the scope of advocacy for the enjoyment of human rights by persons with albinism. Commemorations occurred around the world, but mostly on the continent of Africa. The ceremony at Mbandaka City Hall prominently featured children and youth with albinism, along with their extended families to demonstrate that all were indeed the same.

However, the harsh realities were also present. A heart-wrenching story was shared by the mother of a baby with albinism. With tears streaming down her face, she said her husband abandoned the family because of the child. This mother and her baby found compassion and acceptance on the steps of city hall. One of the officials was near tears himself as he held the baby while listening to the mother’s story. It was a moving scene that exemplified the message on the banner.

The event was coordinated by the local Humanitarian Organization for the Protection of People with Albinism and the Environment.  A conversation with event organizers revealed the plight and needs of people with albinism in Mbandaka. One of the most acute needs is for Ultra Violet (UV) protection, or sunscreen, because the intense direct sunlight on the equator can make life difficult for people with albinism. The local NGO provides special lotions and monitors albinism symptoms, such as skin sores that might prove cancerous and vision impairment. Working to identify persons with albinism is important to ensure access to services (health, education, etc.) and other resources necessary to be productive. For example, a young artist with albinism received support to start a business making signs and banners for publicizing sponsored events.

Within the Community of Disciples of Christ in Congo (CDCC), there are persons with albinism leading worship and participating in church activities like all other members.  The church considers them brothers and sisters in the Lord, and their gifts and talents are truly appreciated. The CDCC Development Office plans to work with the organizers in Mbandaka to address the prevalence of impaired vision by making eye exams and reading glasses readily available. This is just one area of potential collaboration where the church can offer unique solutions to improve lives while uplifting them emotionally, socially and spiritually.

Protecting persons with albinism is consistent with Global Ministries’ commitment to uphold basic civil and human rights. Ending discrimination against persons with albinism will require correcting misinformation, challenging superstitions and modeling equal treatment before the community as the CDCC has done.