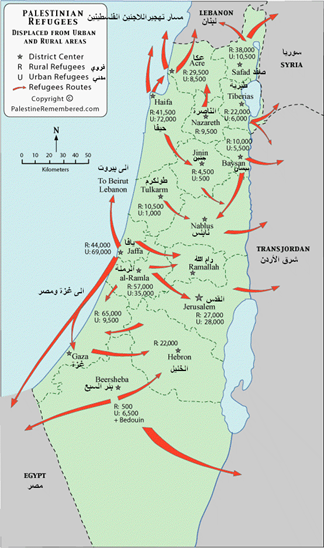 Zahiyyah is a refugee living in Aqbet Jaber Refugee Camp near Jericho. The camp was established in 1948 and is the largest refugee camp in the West Bank by surface area, although only 8,600 refugees are currently living there. Prior to the 1967 war, 28,780 refugees lived there. Zahiyyah was 17 years old when she was forced from her village, Al-Masmiyya Al Kabira, with her family on July 8, 1948. She remembers that the Muslims and Jews lived together in the village and that their Jewish neighbors and British soldiers from the nearby camp told them to leave and return in a week or two. Al-Masmiyya Al Kabira was a village in the District of Gaza situated on the southern coastal plane. The village was at the junction of highways going north and south. The population in 1945 was 2,520. It had two mosques and two schools – one for boys and another for girls.

The village was captured during operations to eliminate the Palestinian Arab civilian population. Four settlements were established on village lands along with two state farms built in the 1950s. Today, the girl’s school is deserted while the boy’s school has been turned into an Israeli army installation. Some of the houses are inhabited by Jewish immigrants, but others were turned into warehouses.[1]

May 15 is known to Palestinians as Nakba Day. “Nakba” is an Arabic word meaning “catastrophe” and Nakba Day commemorates the displacement of around 750,000 Palestinians from their houses and lands in 1948. Some of these refugees went to neighboring countries - Lebanon, Egypt, Syria, and Jordan - while others were internally displaced into the newly declared state of Israel and what is now known as the occupied Palestinian territories of the West Bank and Gaza Strip.

Today, those 750,000 original refugees have become 5.6 million. As the descendants of refugees, international law allows them to claim refugee status as well. Many Palestinian refugees still live in refugee camps, which began as typical tent settlements and have turned into permanent buildings over the decades. Many refugee camps are overcrowded, such as the Dheisheh Camp in Bethlehem which was built to serve 3,000 refugees but today has 15,000 refugees living there. Of the 5.6 million Palestinian refugees, 2.25 million are living in Jordan, where many have been granted Jordanian citizenship, followed by the Gaza Strip (1.4 million), Gaza’s total population is about 2 million people, meaning most people living in Gaza are refugees. Of the remainder, about 475,000 Palestinian refugees live in Lebanon, 552,000 in Syria[2], and 828,000 in the West Bank, including East Jerusalem.

In 1948, the United Nations passed Resolution 194 in response to the displacement of Palestinians in the 1948 war. It states that, “refugees wishing to return to their homes and live at peace with their neighbours should be permitted to do so at the earliest practicable date, and that compensation should be paid for the property of those choosing not to return and for loss of or damage to property which, under principles of international law or equity, should be made good by the Governments or authorities responsible.”[3] This principle is called the Right of Return and has been considered by Palestinians and the international community as a human right and of vital importance in any final peace agreement.  To date, this resolution has not been implemented.

Palestinian refugees are provided services (i.e. health care, education, relief and social services, microfinance, emergency assistance, etc.) and registered as refugees by UNRWA, the United Nations Relief and Works Agency for Palestinian Refugees in the Near East. UNRWA was established in 1949 and began operations in the spring of 1950 as a temporary agency with a mandate set to expire after one year. It is still in operation today, 70 years later, and is independent from UNHCR (United Nations High Commissioner for Refugees) which was created in December 1950. It is one of the only UN agencies providing direct aid – and crucial jobs – to people. In 2018, the Trump Administration decided to end US funding to UNRWA completely beginning with the 2019 fiscal year, leaving it in a financial crisis as the US has been the agency’s largest donor since its founding.

Palestinian refugees in Syria have faced a secondary displacement since 2011 with the conflict there and refugees in the West Bank and Gaza Strip are under Israeli occupation with all the violence and denial of rights that entails. Those in Gaza are facing even worse conditions that those in the West Bank due to Israel’s blockade that has been in effect since 2007. 80% of Gaza’s population is dependent on international assistance, it has a 50% unemployment rate, and 95% of the population doesn’t have access to clean water.[4]

In this time of global pandemic, refugee camps, prisons, and other areas with high population density are particularly vulnerable. There is concern that once the virus takes hold in Gaza, it will sweep through and devastate the population. Gaza has been described by many as an open-air prison due to its high population density, years of blockade of needed goods like construction material and health supplies, movement restrictions, sporadic electricity, poor infrastructure (specifically for water and sewage treatment), and periodic bombings by the Israeli military. In a 2015 report, the UN estimated that the Gaza Strip would be unlivable by 2020.[5]

Due to years of blockade, the health care system in Gaza is woefully underequipped and underprepared to respond to COVID-19. Many health supplies have not been allowed to cross through checkpoints and people have been denied exit permits to seek healthcare elsewhere. The most advanced Palestinian hospitals are both located in East Jerusalem.  Even before the pandemic, access for Palestinians not officially resident in Jerusalem was limited due to Israeli permit systems.  In times of extreme movement restrictions due to the pandemic, they are not accessible at all.

Watch a brief, simple history of the Israel-Palestine conflict. You can find more information, other videos, and book suggestions on our Middle East resources page.

Pray for refugees around the world, particularly Palestinian refugees. Read two Bible studies from the Middle East Initiative: The Escape to Egypt and How Can I Not Sing?

Take action every third Thursday of the month on an issue relating to Israel/Palestine. The action for April 2020 was to ask Congress to restore critical funding and to end the blockade of Gaza.

Write a letter to your member of congress calling for the US to re-fund UNRWA and to support the Right of Return for Palestinian Refugees as outlined in UN Resolution 194.

Partners in Israel/Palestine are often themselves refugees and they work with and in refugee communities, providing health care, education, food, water, and dignity to millions.

Al-Ahli Hospital in Gaza is a service ministry of the Episcopal Diocese of Jerusalem. It provides important medical and surgical care to all people of the Gaza Strip. A majority of Gaza’s residents live in refugee camps and a significant portion of the hospital’s care is provided freely.

The Department of Service to Palestinian Refugees (DSPR) of the Middle East Council of Churches aims to enable people to live with dignity in spite of the various difficulties and constraints that seek to inhibit them from "normal" living. They work in five areas across the Middle East: health, education, vocational training, development projects such as access to water and infrastructure, and women and children’s programs.

Dar al-Kalima University College of Arts and Culture in Bethlehem is the first college in Palestine to specialize in the performing and visual arts as well as cultural heritage and design. It is dedicated to providing quality education that meets the economic, social, cultural and spiritual needs of Palestinian young adults.

[1] Zahiyyah’s story was collected by the YWCA of Palestine for the Fabric of Our Lives Advocacy Project: https://www.globalministries.org/fabric_of_our_lives