All Africa Conference of Churches Statement on the Death of Rev. Dr. John Gatu 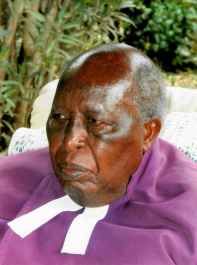 Dear Members of the wider All Africa Conference of Churches (AACC) family.

We write to inform you about the death of the Very Rev. Dr. John Gachungo Gatu who was promoted to the higher glory on 11th May 2017 at 5:20pm.

The Very Rev. Dr. John Gatu was an exceptional leader not only of his Church the Presbyterian Church of East Africa (PCEA) but also at a continental level through the AACC in various capacities.

Dr. Gatu had just celebrated his 93rd birthday in March 2017. He played a critical role in securing the land on which the AACC established its Headquarters.

We also want to highlight the fact that he was the Champion of what we call nowadays the Campaign for African Dignity. During the Lusaka Assembly in 1974 he was the initiator of the call for a moratorium asking missionaries and foreigners to leave Africa alone and allow them or organise their self-sustainability.

He served as the AACC President and supported its functioning and visibility. Upto his departure to the glory he was serving as a prominent member of the AACC Board of Trustees.

We want to thank God for his blessed life during which he has been the blessing for the Church in Kenya, in Africa and in the World.

To God be the Glory!