Here in Kalkfeld the energy is palpable. Christmas is just around the corner. But it is not Santa the children are talking about. Santa and presents and what they want for Christmas has not come up once. 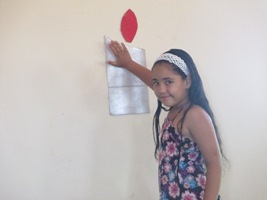 Here in Kalkfeld the energy is palpable.  Christmas is just around the corner.  But it is not Santa the children are talking about.  Santa and presents and what they want for Christmas has not come up once.  I am sure at home they are being swamped with the messages on television.  I saw a five-page-spread-full-color-advertisement insert for the newspaper.  It showed all the things you could ever desire, and all those things you definitely cannot live without; all the many things that their families cannot even afford to want.  It said – “The Good News is Here!” 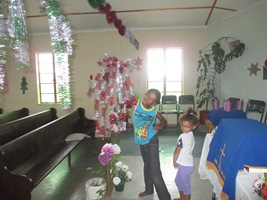 But that is not what the children are talking about.  Instead it is the church activities we have been enjoying.  How refreshing.  From the time I first arrived here the children have been begging for Sunday School.  Last year a volunteer led Sunday School but had to stop when her mother became ill.  The children not only remembered the Bible stories from the book she was reading, they showed me the page she stopped on six months before.  Last year they acted out a Nativity play to narration.  This year when I asked what traditions the church observed during Advent the only answer I got from the children or the adults was the Nativity play.  And the children made it clear, not only would there be a Nativity play (“PLEASE Pastor!”), but this year “we want to talk”- they wanted to learn and say the lines themselves.

There are only 7 children here.  There are over a dozen parts in a Nativity play if you do the whole story from angelic messages to Mary and Joseph to Magi.  So they are 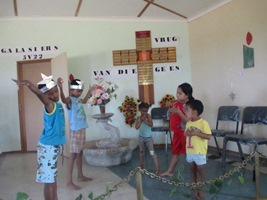 doubling up on the parts.  Their ages are 13, 12, 9, 8, 7, 5, and 5.  Their ability to speak English and/or Afrikaans and stage fright varies by child from day to day.  And I am not director material.  But we started early in November– they insisted so they could learn their lines.  They are very eager.  And it is coming together beautifully.  It looks more like a play and less like an attempt to organize chaos each time.  They are even each other’s understudies.  Five of the seven have been gone during many of the rehearsals.  But they know each other’s lines and want to practice even if there are only 3 of the 7 present.

It is their play.  They learn their lines at home.  They organized the “crew” work on stage after I gave them suggestions the first day.  There is no mother in the wings coaching them on changing their costumes.  They are doing it all themselves.  I get to do the narrator part, and remind them to speak louder, slower and to the audience.  They are incredible.

In the meantime, they are also enjoying absorbing the meaning of Advent like sponges, as they do every part of the Christian story.  They made stars (Hope), Advent Candles and Advent Calendars (Peace), tissue paper flowers (Love) and Chrismons (they know the meaning of all the symbols we made) for the trees (Joy).  They have made a set of the former and latter for every household and the sanctuary, and will give the flowers to the elders on Christmas.  Every day we do a little more preparation.  Each week they decide what will go up and where to decorate the sanctuary.  This Advent may be the best “anticipation” I have ever done.

Rev. Dr. Loletta Barrett, serves with the Namibia Synod of the UCCSA in  Kalkveld,  Namibia.  She serves as a pastor.