This mission pilgrimage had been in the making for some time. Mike visited Japan several times to volunteer with relief efforts carried out at the Emmaus Center – a project of the Kyodan. On my home assignment this year I visited Altadena to share stories of how the church continues to witness in difficult times. He and I were in touch regarding their itinerary which I want to share in order to give a sense of what it would be like to visit Japan on a mission pilgrimage such as this. Receiving guests from churches in the US brings great joy to our partners, because they know who we are. They appreciate the ties with the United Church of Christ and the Disciples of Christ. Each visit is an affirmation of that relationship. For me, it is always an honor serve in keeping this relationship alive. 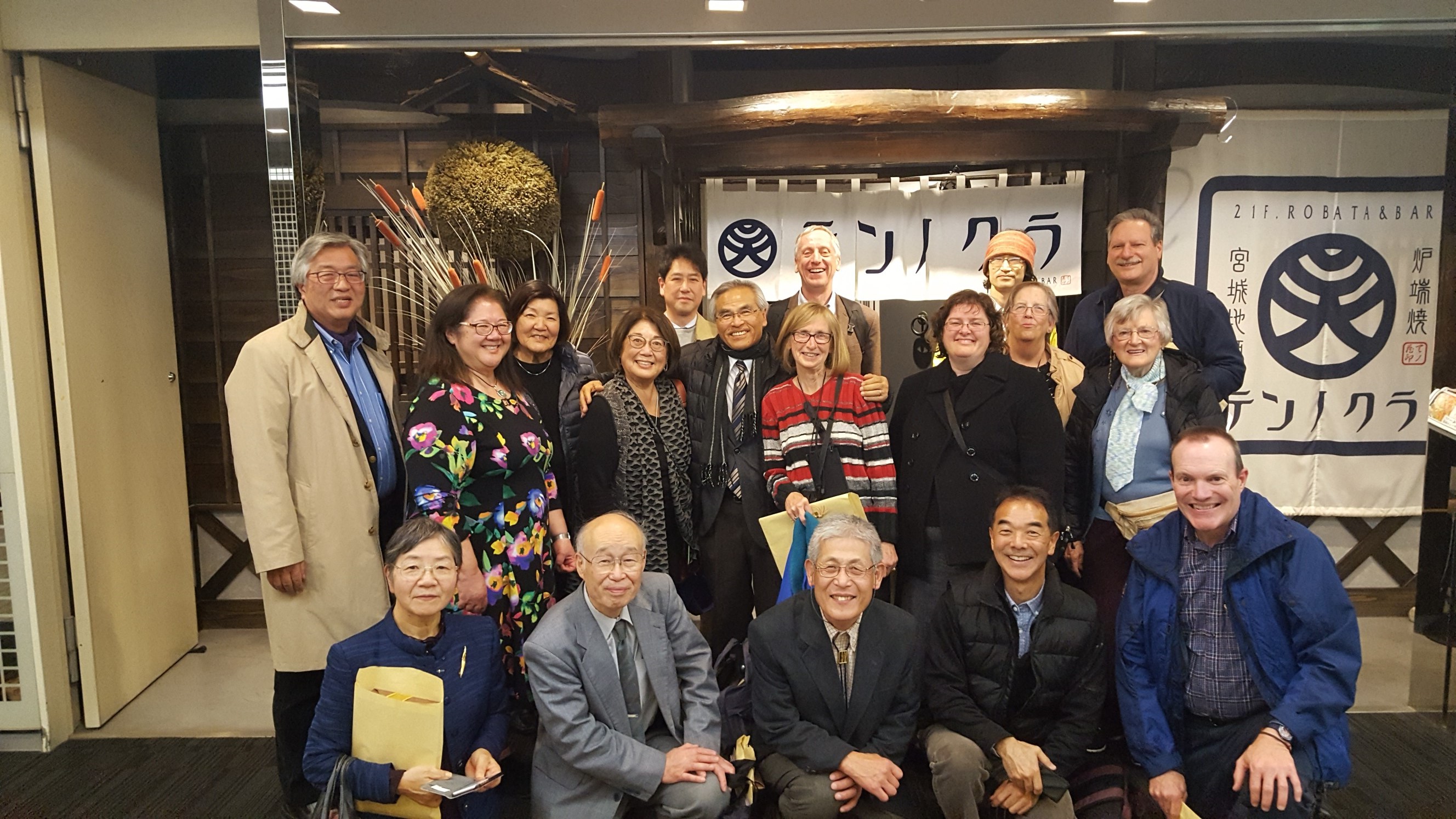 The group from Altadena first made their way to the city of Sendai – the largest city in the Tohoku region that was hit by the great disaster of 2011. Their first day was a Sunday, so they went to the Higashi Sendai Church for worship. At the entrance to the church they had to take off their shoes and use slippers. The congregation was small. The pastor from Altadena commented; “There was something very familiar about the worship service; similar hymns and order of worship, and size of congregation. The greatest difference was that we had taken off our shoes. When we go back to Altadena we’re going to have a worship service where everyone is asked to take off their shoes and wear slippers.” Although I did not accompany them for that portion of their pilgrimage, it was my sense that they had felt right at home with the people at that church. Day One concluded with a dinner hosted by the moderator of the Tohoku Conference who thanked the group for their visit, sharing with them how much it meant for the small and struggling churches in the Tohoku to receive moral, spiritual and financial support through the Common Global Ministries of the UCC and Disciples of Christ. The expressions on the faces in this picture speak for themselves – the joy was mutual. Such relationships are the way that the Holy Spirit works to inspire us to be the people of God.The following is a brief overview of the places Altadena visited: Day Two, the Emmaus Center organized an exposure trip to coastal areas that had been devastated by the tsunami. At the Yamashirocho Church they joined hands with church members to pray for all who have suffered on account of the tsunami. Day Three, they traveled to the Asian Rural Institute to experience life at this school that trains rural leaders from Asia, Africa and all over the world in sustainable agriculture. Day Four, they visited the Aizu Radiation Information Center and heard firsthand accounts of local people who suffer under oppressive conditions in Fukushima. Day Five, they came to Tokyo where I met them and took them to the central office of the Kyodan. Day Six, they were in Hiroshima to offer a thousand cranes at the Peace Memorial, and to hold a worship service for peace. Day Seven, they were in Kyoto to visit the Bazaar Café ministry which reaches out to the LGTB community, and offers a safe space for people recovering from alcoholism and drug addiction, as well as foreign residents who need support. My sister Martha was there to help coordinate that encounter.

While in Tokyo, the group was fortunate to meet Rev. Yoshiki Nakamura – an openly gay pastor. He told us that he had been pastor of an LGBT church community in Tokyo for fifteen years but had to close the church early this year. Openly gay or lesbian pastors have a hard time finding a call. On one occasion he had been approached by a church that promised to call him on the condition that he not be open about his sexuality. He told us that he declined the call. Now Rev. Nakamura runs a small non-profit where he educates churches and schools about how to be sensitive and open to the needs of sexual minorities. He also told us that Japanese society has always been hush-hush about issues having to do with sexual identity and orientation. It is only because of the 2020 Tokyo Olympics, and the fact that the prohibition of discrimination against sexual minorities was written into the JOC Constitution in 2014, that Japan is frantically trying to bring the topic to public attention so that people know to be friendly and understanding toward people of various sexual orientations. During our brief encounter with Rev. Nakamura he was happy to tell us how inspired he was with the “God is Still Speaking” campaign. We were reminded once again that our partners know who we are.

In closing, I want to point out that 38 UCC and Disciples churches throughout the US will be sending Christmas cards again this year to our partner churches in the Tohoku region of Japan. This will be the sixth year that US churches will be lifting up our partner churches in prayer during Advent. Sometimes mission can be perceived as only about finances. But mission is always about relationship. Our partners know that they will be in our prayers. For churches struggling from the aftermath of the great disaster or 2011, we are a sign of solidarity and encouragement. My friend and colleague, Rev. Kataoka, who is chair of the Mission Evangelism Committee of the Tohoku Conference, had these words to share with US churches joining in the Christmas Card Project; “This year we are looking forward to exchanging Christmas cards once again. It is true that we are far from one another. But when we receive your cards it is almost as if we can hear a heartbeat of love and compassion coming from someone so close by. We feel very close to you. Thank you so very much. May the peace of our Savior Jesus Christ be with you.”