Biblical Themes Run Through It 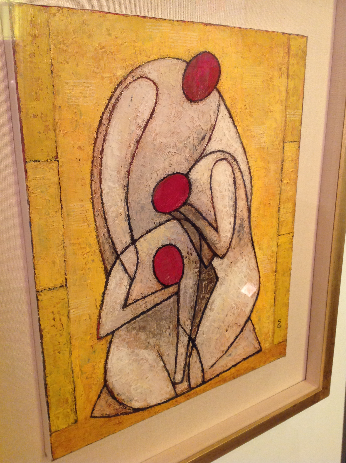 I want to introduce you to some paintings by Soichi Watanabe, one of Japan’s most internationally known Christian artists. I happen to know him from thirty years ago when we met through a Bible study held at the house of a Christian professor in the city of Sendai. Watanabe’s paintings are special in many ways. First, his paintings are mostly based on biblical themes. Second, you will notice that the contours are quite simple, and there are no facial features depicted. And third, most of his paintings depict human figures who are in relationship to one another. When I first saw his artwork, I wondered why he paints in such abstract form. The expression seemed somewhat detached from real life. But now I have come to appreciate his soft tones and the detached simplicity of expression. 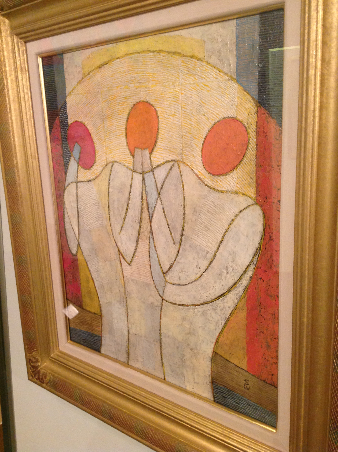 What prompted me to share on this topic was the arrival of two Watanabe paintings at our university this year. These paintings are now hanging in the chapel of our School of Law. One is entitled “Weep with Those who Weep,” and the other “Rejoice with Those who Rejoice.” You will recognize that they go together as a pair to form one message. This picture of “Weep with Those who Weep” represents Watanabe’s sixth version of the painting. Watanabe grew up in the port city of Ishinomaki which was destroyed by the tsunami of 2011. The tsunami claimed the lives of some of his friends, and whole neighborhoods were swept under. One can imagine the deep sorrow and sense of helplessness that Watanabe faced when he returned to his hometown to mourn the dead. He says that he attempted to depict the rough contours of the cross in this latest version. Notice how the figures blend into one another. No one stands alone.

Buddhism teaches the importance of detaching oneself from life. Sometimes it helps to stand back and to let go of the here and now – to let go of desire, and to just BE. In my own experience, there was a time when I unexpectedly fell into that state of BEING. It was in the aftermath of the great earthquake that struck northeastern Japan six years ago. I believe I was overwhelmed by all that was happening in my life. I just couldn’t keep up, so I let go, detaching myself from the need to be in control. It was at such a time that I was keenly aware of the biblical themes that were running through my life: Jesus’s parables, the stories about Jesus, the Old Testament stories about God and the people of Israel. These ancient stories were now happening in and through my life. It was a discovery of the timeless character of biblical themes, and how they come to life when you are most vulnerable. In like manner Watanabe’s paintings depict the biblical themes that run through our lives. They are abstract for a purpose. He wants us to see ourselves in these paintings. As we stand back to survey the large expression of relationships, we are freed from the details, and invited to see the larger message of relationships.

Details can be distracting. Sometimes we can be consumed by the details such that we lose sight of the larger picture. Whether we are Christian, Buddhist, Muslim or non-religious, these differences are details. The larger picture is whether our relationships are honoring the dignity of the people we live with. Dignity can be defined as “an internal state of peace that comes with the recognition and acceptance of the value and vulnerability of all living things” (Donna Hicks, “Dignity – The Essential Role it Plays in Resolving Conflict). What I find in Watanabe’s paintings is an invitation to see patterns and relationships that uphold the God-given dignity of every living thing. I now realize that I want to imagine myself in Watanabe’s paintings – playing my role in God’s mission for peace and justice on earth.

For more on Watanabe’s paintings look for a book entitled:

“For the Least of These: The Art of Soichi Watanabe,” OMSC Publications, 2010.