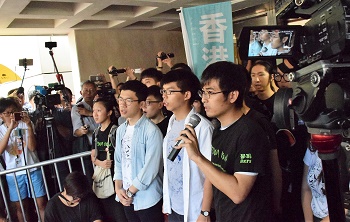 On August 17, three young Hong Kong student protest leaders were sent to jail with terms ranging fromsix to eight months. Nathan Law, Joshua Wong, and Alex Chow had been given community service or a suspended sentence last year for their part in the 2014 pro-democracy demonstrations known as the “Occupy/Umbrella Movement”. However, the Secretary for Justice Rimsky Yuen asked the Hong Kong Court of Appeal to review the earlier sentences, stating that the students’ actions in storming the government headquarters compound and inciting others to join them warranted a harsher punishment. This time the Court agreed and ordered custodial sentences for all three young men. The activists indicated they would take their cases to the Hong Kong’s Court of Final Appeal.

The prison sentence also meant that the three will be disqualified for running for a seat in the Legislative Council for five years. Law, age 24, had been elected last year as the youngest legislator in Hong Kong history. However, he was stripped of his seat last month due to improper oath-taking. Wong, age 20, has received international attention in the press for his political activism. Chow, age 27, was former head of the Hong Kong Federation of Students.

As with everything in Hong Kong, public reaction was heated and mixed. On the one hand, 20,000 protesters took to the streets on August 20 to demand justice for the three students and their immediate release. On the other hand, others said that while the prison terms were unfortunate, the young offenders must take responsibility for their illegal actions and face the consequences for breaking the law and endangering the welfare of others. The government and legal bodies reiterated that the decision was carried out fairly through the court system and under the rule of law. Still, the goodwill gestures of the judge from the earlier court sentences have now been cancelled. Tensions between the government and the pro-democracy forces, including many students and youth, are running high. The road to reconciliation in this highly polarized community will be long and hard.

When asked how churches should pray for Hong Kong at this time, Rev. Po Kam-cheong, General Secretary of the Hong Kong Christian Council, responded:

In times like these, the famous words of the Serenity Prayer attributed to Reinhold Niebuhr also come to mind. I heard them quoted by a young doctor in a worship service at St. John’s Anglican Cathedral to celebrate the 20th anniversary of the 1997 return of sovereignty of Hong Kong to the People’s Republic of China. Whether she meant them as a political statement or not, the words moved me deeply: God grant me the serenity to accept the things I cannot change; courage to change the things I can; and wisdom to know the difference. Indeed, O Lord, give us your peace, courage and wisdom in these troubled times.

In closing, may I take this opportunity to thank you for your prayers and financial support for our work at the Hong Kong Christian Council through Global Ministries. As the worldwide body of Jesus Christ, let faith, hope and love be the watchwords of our blessed common life together.