Hundreds of people gathered on both sides of the border wall that separates Nogales, Sonora from Nogales, Arizona on October 8 and 9.   The convergence was organized by SOA Watch to protest the militarization of the border that is causing so much suffering and death for our migrant sisters and brothers. 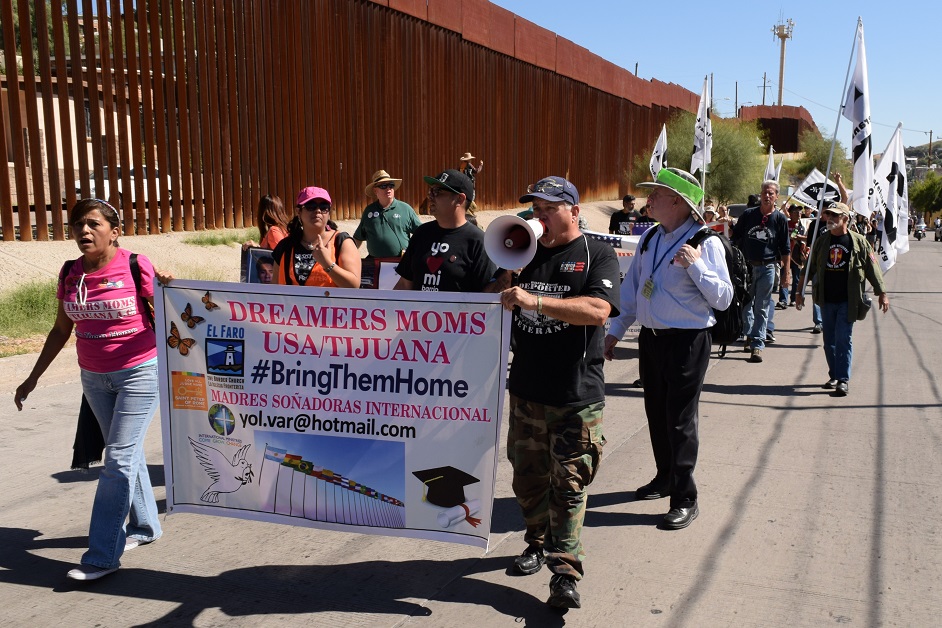 This militarization was started by Bill Clinton and has been further escalated by Barack Obama.  A “crisis” of unaccompanied minors that were fleeing violence and poverty in Central America and seeking refuge in the U.S. occurred during summer 2014.  The response of the Obama administration was to pressure the Mexican government to further militarize its southern border with Guatemala.  Millions of dollars were given to implement Plan Frontera Sur (Southern Border Plan) which placed more immigration agents and checkpoints in southern Mexico.

Sister Guadalupe; of the Hermanos en el Camino shelter in Ixtepec, Oaxaca; told us that the militarization in southern Mexico has forced migrants to pass through more isolated, and dangerous, regions.  She said that nine of every ten migrants arriving at the shelter have been assaulted, and more than half the women have been raped.  Mexico is now deporting more Central Americans than the U.S., and this repression and violence have reduced the number of people arriving at the U.S. border.

“I very much appreciate Mexico’s efforts in addressing the unaccompanied children who we saw spiking during the summer,” said Obama in January 2015.  “In part, because of strong efforts by Mexico, including at its southern border, we’ve seen those numbers reduced back to much more manageable levels.”

The Nogales Wall was first built by the Clinton administration in October 1994 – just three months after he visited the site of the former Berlin Wall.  The Obama administration built a taller, and stronger, border wall in the summer of 2011.

“We celebrate unity,” Clinton had said in Berlin.  “We stand where crude walls of concrete separated mother from child, and we meet as one family.  We stand where those who sought a new life instead found death.  Berliners, you have proved that no wall can forever contain the mighty power of freedom.”

The Clinton administration created the Border Patrol’s first national strategy in 1994, “Prevention through Deterrence.”  The goal was to “Raise the risk…to the point that many will consider it futile to attempt illegal entry… Illegal traffic will be deterred, or forced over more hostile terrain, less suited for crossing.”  Since then, the bodies of more than 6,000 people have been found in the southern border region.  The actual death toll is much higher because many bodies are never found.

Last month, we commemorated the 15th anniversary of the attacks of September 11 and I found myself reflecting on how we define terrorism.  It seems to me that terrorism involves the use of violence, targeting civilians, to achieve a political objective.  Thousands of civilians have now died after being forced over hostile terrain along the border in order to deter people from entering the U.S.

“No más, no more, tear down the border walls!” we chanted during the litany for those victims at the end of the convergence here in Nogales.

In Love and Solidarity,

Scott Nicholson serves as a volunteer with the Hogar de Esperanza y Paz (Home of Hope and Peace) community center in Nogales, Mexico. His appointment is made possible by your gifts to Disciples Mission Fund, Our Churches Wider Mission, and your special gifts.