Breaking Down the Walls of Division 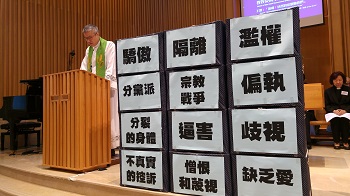 One of the busiest seasons for the Hong Kong Christian Council is during the month of January. This is the time when we celebrate the Week of Prayer for Christian Unity together with churches all over the world. The theme for 2017 is “Reconciliation: The Love of Christ Compels Us” based on 2 Corinthians 5:14. The materials were prepared by Christians in Germany in commemoration of the 500th Anniversary of the Reformation.

In Hong Kong, we had three worship services. One was sponsored by the Hong Kong Christian Council with Holy Communion, the second was a Praise and Prayer Service hosted by the Catholic Church, and the third was an English-language event co-sponsored by both HKCC and the Catholics. There was a good representation of different church bodies, denominations and Christian organizations at all three services. 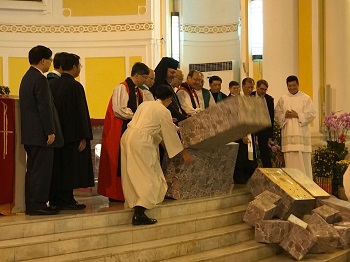 One suggestion from the Council of Churches in Germany was to create a symbolic “wall of sins” that would be built and broken down during the worship. The blocks would then be reassembled in the shape of a cross. This of course was a visible reminder of Germany’s own Berlin Wall that was dismantled in 1989. However, we are also reminded of the walls that still exist in the twenty-first century and the sins that continue to divide us both as a church and as a people— lack of love, hate and contempt, false accusation, discrimination, persecution, broken communion, intolerance, religious wars, division, abuse of power, isolation and pride.

Our society in Hong Kong is in desperate need of reconciliation. We are deeply divided over political affairs, economic policy, and social issues. The ‘one country, two systems’ principle that was put in place after the 1997 handover of Hong Kong to the People’s Republic of China is under attack from all sides. How can Christians be reconcilers in such a polarized society?

I was helped in this quandary by words from Brenda Mapel at Ridglea Christian Church in Ft. Worth, Texas. She says, “Simply put, reconciliation is the intersection between forgiveness and justice. It is an act of unconditional love colliding with the desire to make life better for the world. It requires us to listen intentionally for God’s voice in the stories of our neighbors.” 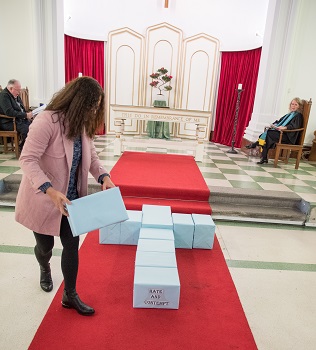 The Week of Prayer for Christian Unity is one concrete way that churches in Hong Kong witness to Christ’s compelling love. When a Catholic bishop can preach at a Protestant service, when women ministers can serve Holy Communion, and when Christians from all churches can offer one another the peace of Christ, indeed, we have made progress in breaking down some of those walls of division. I hope you will enjoy and ponder upon the photos from the three different services in Hong Kong included in this letter. As the German church says

“…the construction of a symbolic wall at the confession of sin, the visible presence of this wall during the proclamation of the Word, and finally the dismantling of this wall to form a cross as a sign of hope, give us courage to name these terrible divisions and to overcome them with the help of God.”

May I take this opportunity to thank you for your support of our reconciliation ministry in Hong Kong through Global Ministries. Your financial contributions and prayers are making a world of difference to those in need of forgiveness, justice, unconditional love and a better life.

Judy Chan serves with the Hong Kong Christian Council. Her appointment is made possible by your gifts to Disciples Mission Fund, Our Church’s Wider Mission, and your special gifts.