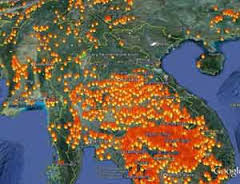 Recently a Christian from another tradition asked me if I was “living in the fire.”  I asked if she meant persecution, as that has been one of the interpretations of “baptism by fire.”  She said no, that it’s a kind of next step in life in the Holy Spirit.  I’m still meditating on what this might mean.

There are probably a number of ways to interpret “fire” in this life.  There has been much in the news about the fires of war and the deadly fire of human displacement, with people fleeing from one country to another, or even to another continent, and 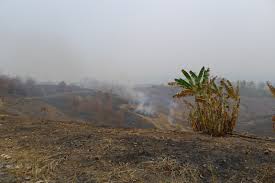 finding little safety or welcome.  There has been fire in Bangkok, with the deadly bombing at the Erawan Shrine in August.  A number of people, most of them ethnic Chinese tourists from around the world, lost their lives or were badly injured.  The police tell us they have arrested the perpetrators, and the situation is in hand.  But the fires of this world are seldom in hand.

Earlier this year I visited northern Thailand during the burning season.  It just happened to be a good time in the schedule to visit some of our Church of Christ in Thailand missionaries, in my capacity as a support person in the national offices.

You may want to know what the burning season is.  All across northern Thailand, Laos, Myanmar, Cambodia, and southern China, slash-and-burn agriculture is still practiced in the hills, generally by marginalized minority groups who have ended up on the poorer farm land.

From late January well into March, hill farmers are burning the stubble in their fields, to prepare for the next season’s crop.  The choking smoke lingers in the air for much of this time, and it causes daily sore throats and breathing problems every year.

For more than forty years, missionaries, government experts, and aid groups from around the world have been teaching and training farmers to grow cash crops other than rice (AND other than opium poppies) all across the northern hills.  These programs have shown great success in Thailand—people are growing some great coffee, strawberries, grapes, lettuce, tea, and even macadamia nuts and apples.  I’m told the apples are still a developing crop, and it will be awhile before really good apples can be grown on these northern tropical hills.

But the farming progress has not been as strong in Laos, Myanmar, and Cambodia, and many people in northern Thailand say that the smoke is mostly from the other side of the border.  They’re probably right about that.

What kind of burning season are we in?  Are we in fires that cause suffering, or are we in purifying, burning-bush fires?  Are we reaching out to the suffering of others, as Moses was called to do?  Am I living in the fire?  Are you?

Together in God’s love,