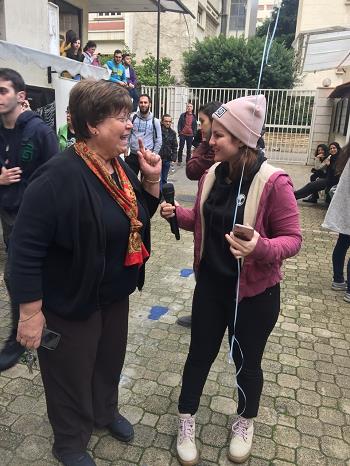 Exactly a year ago we left the U.S., left family and friends, left a familiar environment and lifestyle, to come to another place and people we knew and loved. In the past year here in Beirut, Lebanon, we have been privileged to enter the world and the hearts of those among whom we are serving in the Union of the Armenian Evangelical Churches of the Near East (UAECNE) and Haigazian University, thanks to the support of Global Ministries and the Armenian Missionary Association of America. In playing a supporting role in the various tasks we are given, we are helping the churches and institutions continue to be salt and light in the Middle East through worship, education, outreach, children’s and youth ministry, ecumenical cooperation, and much more.

But it is a very different world, with very different challenges, than what we used to face “back home” in the U.S. It would be very easy and very tempting to blithely dismiss the daily problems and existential crises that people in this region endure, and say, “Well, we all have our burdens to carry. We’re really all in the same situation.” No, we are not.

How often have you seen your life, workplace and neighborhood crumble, block by block, because of a war that you have no part in, and little interest in? How regularly do you face neighbors who look upon your possessions as things that they are entitled to, who create rhyming slogans that cheerfully relegate some religious groups to the grave, and other religious groups to exile? Yet this is but a fraction of what the citizens of Syria have been enduring for the past seven-plus years.

And Lebanon, too, is in a chronic state of stress, as unresolved tensions from the 1975-90 civil war, plus political wrangling in this parliamentary election year, occasionally spills out in tension on the streets. These days, parents and teachers are taking to the streets to demonstrate, with economically-struggling parents wanting the government to halt the proposed mandatory (and retroactive) salary increases, and low-salaried teachers want the government to push those increases forward. But it is the public, not the government, who will bear the financial burden, or perhaps collapse under it. Added to this is the severity of winter storms, resulting in the scattering of tons of garbage, especially plastics, into the Mediterranean from the crumbling, haphazard seaside dumps along the coast. Piled on top of that are the words and actions of regional and international players, casting doubts as to whether they really want a resolution to the Syrian war, and the return of its refugees to their homes in peace. The weight of all of this can only be borne so long. And then, before long, something new will inevitably pile on top of it all.

In late December an Armenian Christian family from Damascus moved into one of the apartments on the floor where we live, in the UAECNE headquarters, and little by little we got to know them and love them as dear friends. They had seen the war grow from a problem in a distant suburb in 2011 to an overflowing well of fears and dangers engulfing their country. Getting to work, getting to school, getting home, constantly checking on each other throughout the day, enduring attacks from rebels on three sides, hearing the roar of circling warplanes overhead. A couple of years ago, one son fled for Europe and the other escaped to Lebanon. Here the sisters and mother (the father had passed away years ago) joined the son to await their departure to a safe haven in Australia, to a city far away from the community that had shaped and sustained their lives. “I built my home, little by little, with my own resources, and now… We have to leave it to others. But it will help that poor family (that they invited in) to live rent-free, and they can use their money to educate their children. I never wanted to leave Syria, but we have to…”

A pastor in Aleppo shared some of the struggles, doubts and fears that he endured in daily attending to his small flock in the midst of an unpredictable war. Once a shell fell in the middle of the church compound, but for some reason did not explode. When his brother (overseas) heard about it, he would not believe others who said that he was alive and uninjured, until he finally was able to hear his brother say, “Don’t worry, I’m alive.” Many friends overseas counseled him to think of himself and his family, and flee to the West. He recalled, “I was unsure of what to do. I know that this is my calling, but I also saw the danger. There was only one solution: I buried my heart in Aleppo.” Yet the word “buried” isn’t strong enough; he really said; he “dug a grave” for his heart there. He “planted” it in the soil of his homeland. He knew that only then would he be fully committed to staying and serving, trusting in the Lord Jesus until the end.

I am not sure if we have “buried our hearts” yet here, but little by little, we find ourselves plowing and tending this garden, fertilizing and weeding, and dropping new seeds in what seems from a distance to be an impossibly rocky, thorny and intractable wasteland. But one of these days, I am sure, our hearts will also fall into one of those furrows and take root. And we will continue praying to the Lord of the harvest to send other workers into his fields throughout the world, to bury their hearts wherever God takes them.

Nishan and Maria are currently serving the Union of Armenian Evangelical Churches in the Near East (UAECNE) as communications, worship, and leadership training coordinator.