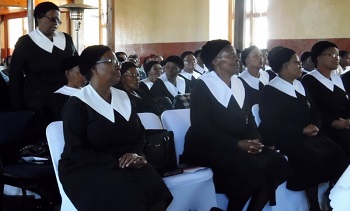 The passage from Isaiah above was read on a recent Sunday in Morija during a special service led and prepared by the Mothers’ Union, one of two women’s groups in the Lesotho Evangelical Church in Southern Africa (LECSA).  Wearing their distinctive black and white uniforms they filled a large section of the church.  The LECSA women’s groups are the most active of the church associations and regularly meet for fellowship and service. 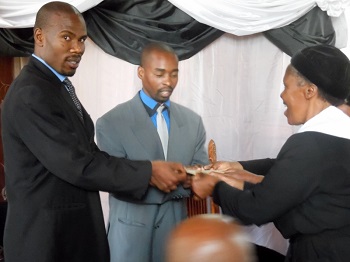 Although Isaiah’s words were directed to the nation of Israel, the women’s groups of the LECSA understand that God has called them, too!  God has chosen them, too!  God strengthens them, too!  Throughout the year their acts of kindness and generosity are visible in the church and community.  Their faith in God enables them to reach out and serve others.  They lead by example and regularly assist those in need.   On this particular Sunday they presented a gift (left) of financial support to student representatives of Morija Theological Seminary.  And then, after the service, they served light refreshments to everyone present.

One of the questions I’m often asked is about Sunday School in the LECSA.  In Morija the children attend the church service through the sermon and then, after giving their offering, they go outside to meet

with their teachers while the remainder of the offering time (usually 30-45 minutes) takes place inside.  The children have small booklets containing bible lessons, memory verses, hymns and songs which they learn during the year.  New booklets are issued at the beginning of each year. 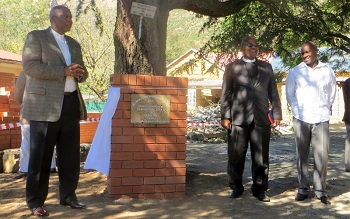 Scott Hospital in Morija is one of two LECSA hospitals.  It happens to be where His Majesty King Letsie III was born in 1963.  The King was present (left) at a May event launching the Scott Hospital Improvement Project (SHIP).   The project was conceived nearly three years ago during events commemorating the 50th birthday of His Majesty.  The King has long had a dream for the facilities at Scott to be renovated and enhanced.  At the end of 2013 he started a renovation fund and over time this has evolved into SHIP.  Besides renovation work, SHIP hopes to build a new children’s hospital.  Lesotho currently does not have such a designated facility and it is hoped that Scott will become the nation’s premier facility for 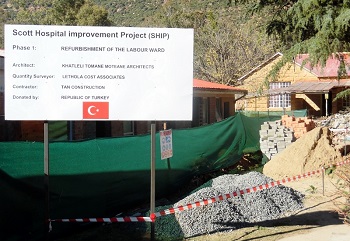 pediatric health care.  Other planned phases of SHIP include constructing a new maternity wing and major renovation work and upgrading of both Scott Hospital and the Scott Hospital School of Nursing.

The scope of SHIP is large and estimated to cost at least $10 million.  Work will be carried out gradually in phases as funding is secured.   Major funding is being sought from the Lesotho government, business community and international partners.  The 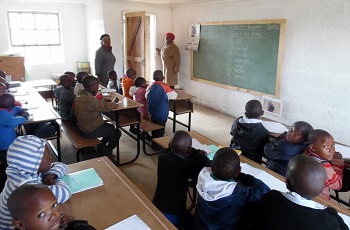 first step of SHIP is renovation of the Labor Ward, currently underway (left), which is being funded by a generous donation from the Republic of Turkey.

May was the month that the students and teachers at Qiloane Primary School finally moved into their new classrooms!  Although there are still a few things the contractor needs to attend to, including putting up some more chalkboards, the new furniture has been delivered, the rooms are in use and the days of holding classes outside under the trees are over!  They are thrilled with the new 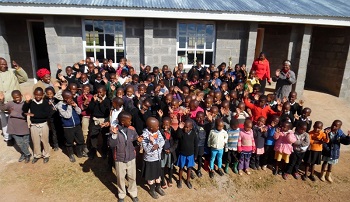 building, to say the least!  It might be my imagination, but it seems like there are more smiles on the faces now.

On my last visit to the school the students and teachers were eager to display trophies awarded to them by their district for their national exam results in Sesotho, science and mathematics.  Only a few schools received these awards so they were proud of their achievement. 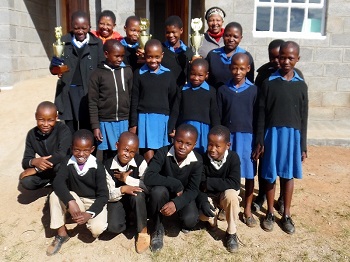 As these young Qiloane Primary students grow up, we pray they will know that God has called them; God has chosen them and will strengthen them as they face difficulties in life.  One of the many offering choruses that is sung in the LECSA uses words from Isaiah 40:31 --- “but those who hope in the LORD will renew their strength.  They will soar on wings like eagles; they will run and not grow weary, they will walk and not be faint.”  May we all fly!

Mark Behle serves with the Lesotho Evangelical Church. His 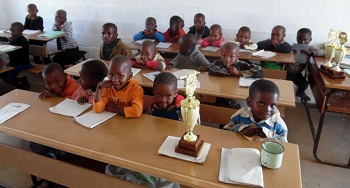 appointment is made possible by your gifts to Disciples Mission Fund, Our Churches Wider Mission, and your special gifts.