by Global Ministries (Disciples of Christ and United Church of Christ) | published on May 16, 2018 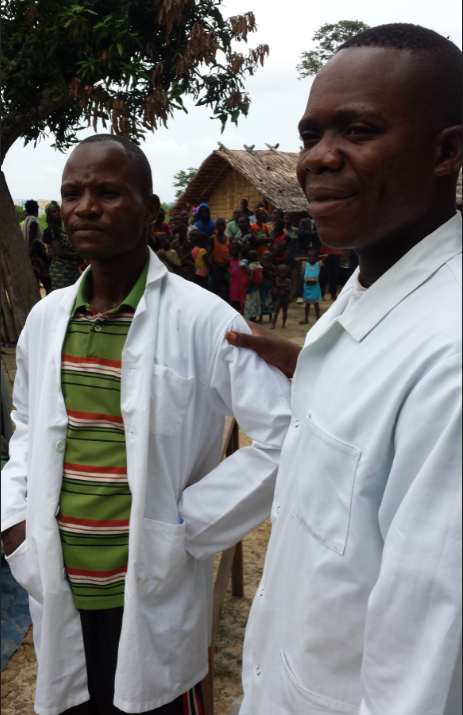 The Community of Disciples of Christ in the Congo (CDCC) shares news that several of their hospitals in the Equator region are receiving new patients with Ebola. In Ikoko, a village approximately 90 miles from Mbandaka, there are currently 21 cases of Ebola confirmed and 17 individuals have died.

The CDCC is joining partners in the region and is implementing prevention measures to avoid the spread of this dangerous disease. Through these measures, the CDCC is hoping to prevent the virus from spreading into Mbandaka and other surrounding villages. In response to this recent Ebola outbreak, the CDCC plans to:

·         Provide medicine and supplies to Bolenge Hospital and the ten health points.

·         Increase awareness of the recent outbreak of Ebola in Mbandaka, Bolenge, and villages surrounding these areas.

·         Heighten hygiene and sanitation protocols  of all hospitals and health points.

·         Increase the number of screenings for the disease, even throughout the apparently healthy population.

The CDCC has set up health points to prevent the spread of Ebola in the following areas:
Bolenge Hospital and health point, Wangata, Iyonda, Secli, Ikengo, Bongonde, Nkalamba, Boyeka, Losanganya, and the Jordan Evangelical Clinic. Their preliminary budget for these initial actions total $18,500. Global Ministries is grateful to Week of Compassion and One Great Hour of Sharing for their rapid response to this emergency. Relief funds from these two offerings have been approved to provide urgent assistance to the CDCC in their response to the Ebola outbreak on behalf of the Christian Church (Disciples of Christ) and the United Church of Christ. Global Ministries welcomes gifts for the CDCC’s health priorities and their work to address the Ebola outbreak.

New cases of Ebola have been confirmed in Mbandaka, Democratic Republic of the Congo. Mbandaka is the central location of the Community of Disciples of Christ in the Congo (CDCC), long-standing partner of Global Ministries in the Democratic Republic of the Congo. One of the recently confirmed cases of Ebola has been received at the CDCC’s Bolenge Hospital, where the CDCC is working with local efforts to treat and isolate this case. To increase their preventative measures, the CDCC is increasing the number of health points from 11 (Bolenge Hospital and ten health points) to 66 locations. These additional health points are located at 30 CDCC schools and 25 local congregations. Each health point is being equipped with sanitation washes and areas to provide isolation should any new cases arise.

The CDCC is requesting funds for protective equipment, medicine, materials to set up isolation units, sanitation and washing areas, and laser thermometers for each location to identify and monitor any individuals with a fever in Mbandaka. The CDCC estimates the cost to accomplish these additional actions, along with their initial action plan, to be approximately $46,000.

Church of Christ in the Congo (ECC)
On Saturday, May 5, 2018, a team from the Church of Christ in the Congo’s (ECC) health department joined the World Health Organization (WHO) and Doctors without Borders in the Bikoro region of the Equator Province. Upon their visit, the team confirmed five active cases of Ebola, including two patients being hospitalized at the Bikoro General Hospital. The remaining three patients were receiving treatment at the Ikoko health center. Samples were taken from these five active cases and sent for analysis to the National Institute for Biological Research in Kinshasa. Since Saturday, May 5, the ECC has reported 39 cases of Ebola, 19 deaths, and 29 suspected cases of Ebola from the Bikoro Health Zone.

In response to the Ebola outbreak, the ECC deployed a complete mobile laboratory in Bikoro, providing medical case management at the Bikoro and Iboko hospitals with support from the Belgian Doctors without Borders, and preparing Wangata Hospital to become a treatment facility for suspected cases in Mbandaka. The ECC is providing logistical support of medical personnel in response to the epidemic, and has established an airlift and medical helicopter to fly between Mbandaka, Bikoro, and Kinshasa with the support of the WHO and the UN.

The identified priorities for the ECC is are to continue the deployment of field experts to increase knowledge of the epidemic, preparing vaccinations to interrupt the transmission of Ebola, and to mobilize communities to respond to the outbreak. ECC is requesting funds to coordinate and mobilize community volunteers in raising awareness of the Ebola virus and prevention methods. 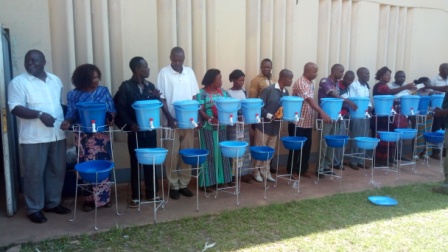 The Community of Disciples of Christ in the Congo (CDCC) reports there are four patients receiving treatment at Bolenge Hospital. Additionally, two individuals have passed away from the disease. The CDCC is responding quickly and building on their experience in 2015 when the Ebola Disease was present in Boende. The CDCC is setting up isolation units, providing protective equipment for medical staff, medication, and treating those diagnosed with Ebola. The CDCC is feeling the impact of Ebola in their communities. The four patients with Ebola are members of the Disciples church, and many in Mbandaka, Bolenge, Bikoro, and Boyea are fearful of the foods available in the markets. Nonetheless, the CDCC is continuing to set up the sanitations at health points and provide care for those diagnosed with Ebola. 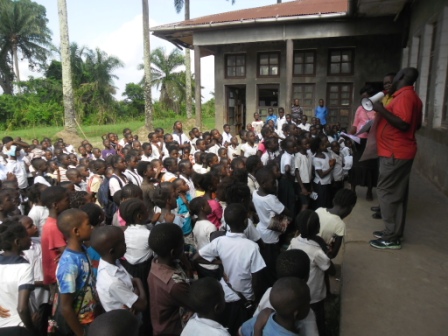 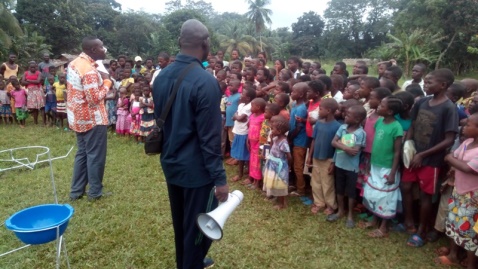 The Community of Disciples of Christ in the Congo (CDCC) continues to respond to the Ebola crisis in the Democratic Republic of Congo. The CDCC is on track to educate and inform 100,000 people through church and school outreach programs. Forty-two pastors have been educated about Ebola and how it spreads, and some WASH (water, sanitation, and hygiene) workshops have occurred. Hand washing kits were distributed to each church in Mbandaka, along with new protocols for baptism and communion. Outreach campaigns were conducted at seventeen schools and twelve parishes. Further, approximately 1,350,000 people have been reached through a CDCC media campaign on three different local radio stations.

In order to prevent the spread of Ebola, CDCC leaders also made decisions regarding church protocols. Leadership has asked that pastors speak about Ebola and proper hygiene in each morning devotion. They have also asked that members clean their hands before entering the church, and that elders and pastors wash their hands before the service of communion. As a further precaution, they are asking that members and leadership do not shake hands. 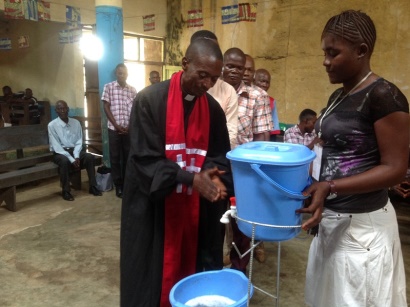 In Mbandaka, no new cases of Ebola have been reported in the last three weeks, but the CDCC continues to stay vigilant. Vaccinations are occurring at Bolenge Hospital. So far, there have been no refusals to take the vaccine, even though it is unlicensed. However, cases continue to occur in Bikoro. At Itipo Hospital, fourteen Ebola patients have been received and treated – five have passed away, five have been healed, and four remain hospitalized. 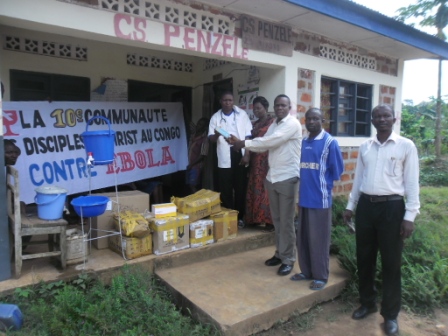 The Community of Disciples of Christ in the Congo (CDCC) has been active and present in schools and parishes in Mbandaka and Bikoro to raise awareness on the spread of the virus and to prevent the spread of Ebola. Present in 49 schools and 27 parishes, over 19,000 children and adults received training on ways to prevent Ebola from the CDCC.

The CDCC had four goals to accomplish throughout these prevention training sessions and workshops, including:

–          Participants will have a good understanding on how Ebola is transmitted

–          Participants will understand why they must avoid eating wild meat, which has been found dead

–          Participants will recognize Ebola symptoms in the community 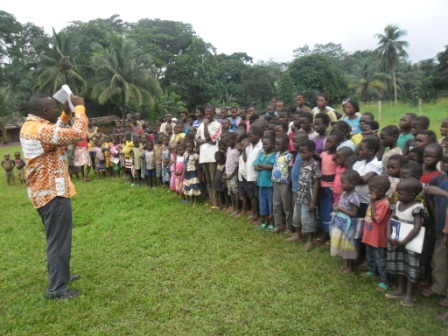 In addition to the many training sessions and workshops, the CDCC was able to establish 213 hand-washing stations and 14 CDCC health points received 31 laser thermometers and medicine. The Community of Disciples of Christ in the Congo is grateful for the collaboration of many who have come together to respond to the Ebola outbreak in the Equator region. In moving forward, the CDCC is working on a more sustainable system to equip sanitation stations around the region. Additionally, the CDCC is working to strengthen their health stations who are facing shortages in medicine and supply due to the significant amount of work done around Ebola since May.

Watch a slideshow of photos from the CDCC as they prevent the spread of Ebola in the Mbandaka area of the Democratic Republic of Congo.

At the end of July 2018, the World Health Organization officially declared the end of the Ebola outbreak in the Democratic Republic of the Congo. In total, there were 53 confirmed cases of Ebola and 29 deaths. The Community of Disciples of Christ in the Congo (CDCC), along with many others, were able to respond to the outbreak quickly, helping to reduce and minimize the spread of this most recent outbreak. The virus directly affected CDCC churches and church members in Bikoro and surrounding Mbandka in the Equator province. 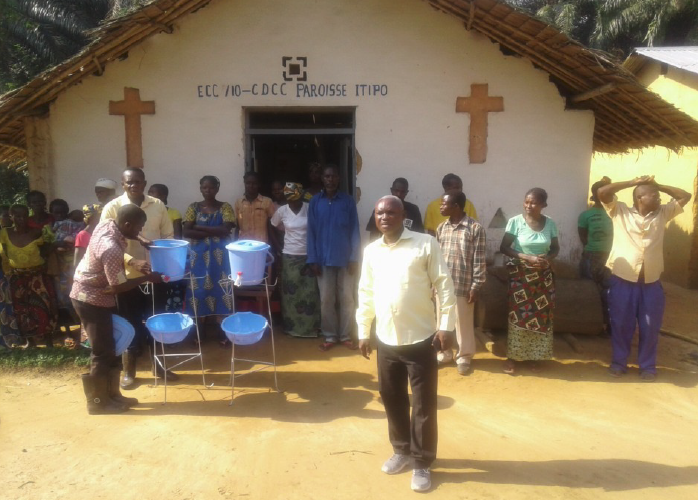 In response, the CDCC Health Department led a successful awareness campaign in churches and schools to prevent the spread of the virus. The message of this awareness campaign included the topics of prevention, sanitation, and awareness of early symptoms of Ebola. The CDCC set up hand washing stations outside every church, hospital, school, and clinic in the area. Also, CDCC churches incorporated hand washing into the communion service and encouraged members to replace their usual greeting of handshakes and kisses with clasped hands and a nod during this time period.

The awareness campaign run by the CDCC was not only successful in preventing the spread of the current outbreak, but it has motivated the community to be more responsible for their collective health. Each community is making decisions on ways to improve their community’s wellbeing. Moving forward, the CDCC is committing to training local leaders – pastors, lay leaders, and school teachers – on ways to encourage the community to adopt preventative measures for any virus. Also, the CDCC is planning to equip each church and school with hygiene kits, clean water, and improving access to food.

Global Ministries is grateful for all who have given gifts of care for this situation, including Week of Compassion (Disciples) and One Great Hour of Sharing (UCC).