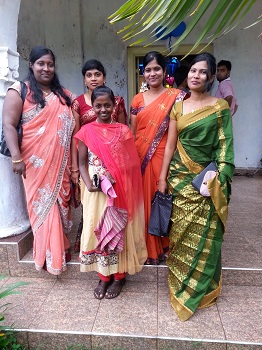 Spending most of one’s life in the northern United States makes it hard to focus on a spring newsletter when every day seems to be mid-summer! But we’ve had a bit of the rainy season that is about 6 weeks late in our part of Sri Lanka, and it has been cool enough some nights to turn off the fan after midnight!

It has been a busy season. The Oori after-school program where Lindley works has grown in the last year from under 100 to close to twice that. Typically, regular government schools have large classes, and teachers cannot spend needed time with individuals or on particularly challenging topics. Most students go to an after-school program for more work in subjects tested in the O-level exams to see if students are able to progress to the next level.

Snacks for poor children who may not have had lunch – or even breakfast – have enticed many children whose parents work to come to the Oori after-school program and, fortified with healthy calories, spend productive time on learning basics and even recently-added art, sports and music projects!

A new activity of another sort that is just gathering energy is an English language church service in Jaffna on Sunday afternoons, organized by the woman who directs the Christmas concert of Jaffna high school choruses. Lindley accompanies for this concert and now she also accompanies the church service. A wonderful mix of people gathers – Sri Lankans, Indians, Americans, lay folk, various kinds of ordained folk, old, young and otherwise – and somebody new each week!

Andy continues working at the seminary with women who are interested in leadership roles in the church. The seminary itself has a new principal and is reaching into surrounding communities to expand its offerings and to serve both church and community in meaningful ways.

Andy’s next CTS class is on congregational church governance. The founders of the American Ceylon Mission were Congregationalists, and that style of church organization was set aside in a merger some years ago with a denomination with episcopal – Anglican – polity. Some original merger churches left that denomination some years ago and formed the Church of the American Ceylon Mission (CACM), and those churches have continued in practice as their leaders were trained – Anglican. Maybe change is coming.

Another course will be about the position of women – in the world, Sri Lanka and the church. We’ll look at what’s changing in women’s roles and rights – and how that’s shaped by the Bible, church, history, culture, justice and the current state of the world and its needs. A challenging topic . . . everywhere!

Poverty, splintered ethnic/language/religious loyalties, traditional values and modern realities are also challenges for Sri Lanka, and also invitations to find a way to national peace and prosperity without sacrificing culture and age-old loyalties: two languages – Sinhalese and Tamil, four major religions – Buddhism, Hinduism, Islam and Christianity. All must work to live together on a small island in ways that honor both modern AND traditional worlds.

The watchword for Sri Lanka seems to be change – change for which a history of colonialism does not give preparation. Sri Lanka faces change about which it may have limited choices and limited time and control. It also has wonderful possibilities and promise for a future which will give shape to hope for us all in this demanding world that we share!

Pray with us and with our Sri Lankan brothers and sisters for the openness of mind and heart among Sri Lankans to see the future as an invitation to reimagine what is possible and understand anew what can happen with a country of such deep history, variety and gifts. The greatest gift is its people, who will have many possibilities yet to be discovered, possibilities to respect and honor!

Andy Jepson and Lindley Kinerk serve as long-term volunteers with the Church of American Ceylon Mission. Their appointment is made possible by your gifts to Disciples Mission Fund, Our Church’s Wider Mission, and your special gifts.