Nine years had passed since the nuclear disaster in Japan. It was a grey and dreary day as I got off the bus in front of the Fukushima High Court to meet my friend Terumi who is one of the co-representatives of the “Children’s Trial Against Radiation Exposure.” 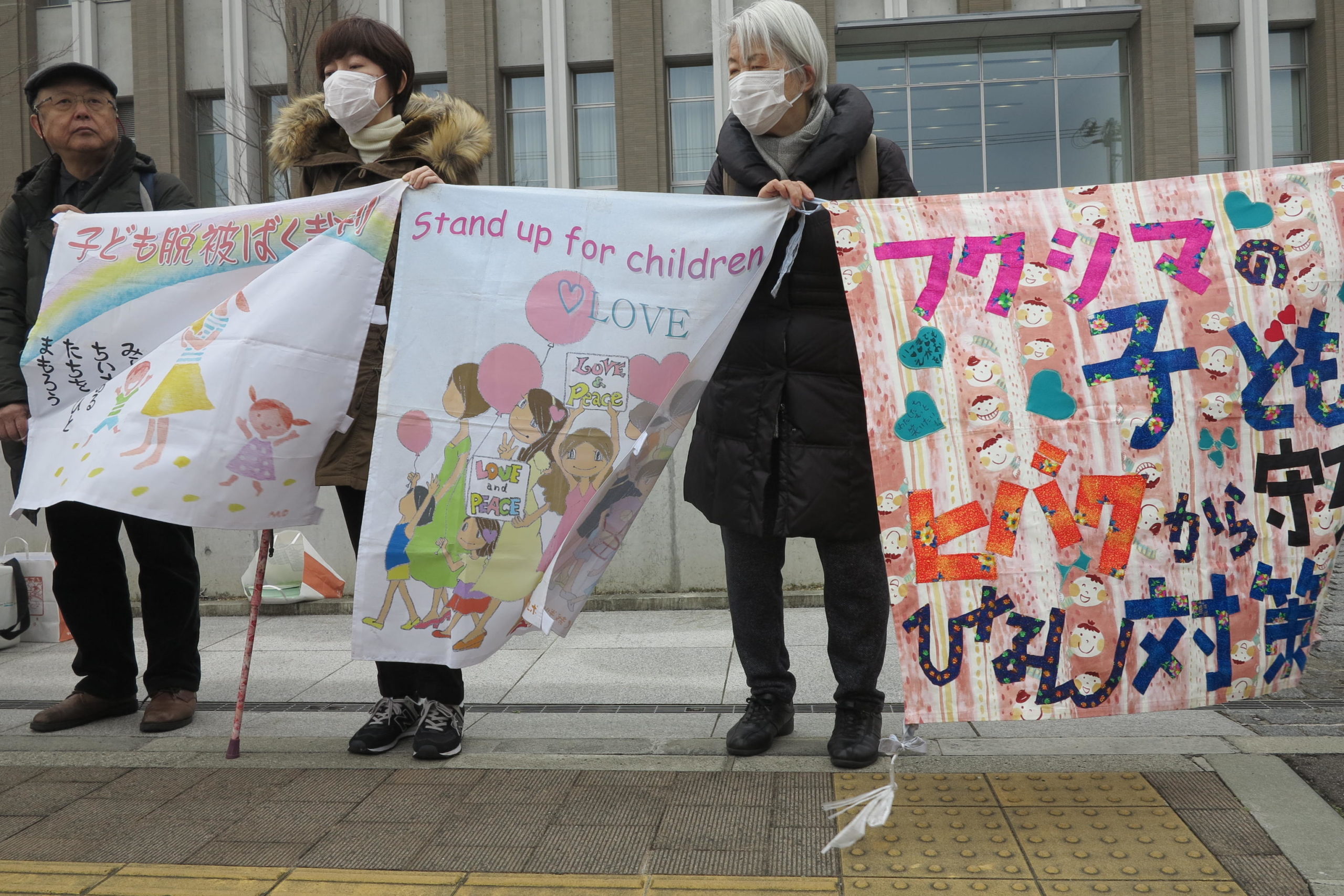 I was there to attend the 26th and last hearing for the court case. On this day the plaintiff lawyers had succeeded in convincing the judge to call Prof. Shunichi Yamashita as a witness. Yamashita was the “expert” Fukushima Radiation Health Risk Advisor sent in to Fukushima by the Japanese government after the disaster to contain the situation. Terumi gave me a big hug. I saw that she was wearing a black coat with the letters UNITED CHURCH OF CHRIST inscribed on the front. The coat had been a gift that she received several years ago when she was invited to Cleveland to speak at the Common Global Ministries board meeting. I was glad to be present with her on this important day as a visible sign of our ongoing solidarity.

Terumi introduced me to several of the plaintiffs, including one 14 year old girl on crutches. Her name was Yuka. She had twisted her ankle playing volleyball, and told me that she couldn’t wait to get back on the court to play the sport again with her friends. She had accompanied her mother, who was one of the adult plaintiffs. Yuka’s mother had attended most of the hearings thus far, but for Yuka this was her first time. As I was talking to her, Yuka was asked to add her own handwriting to a large banner that would express her feelings of anger. She wrote; “I love Fukushima.” This feeling of deep attachment to one’s homeland (the place where you were born and where all of your family memories are) is such a universal feeling. Her words on the banner have left a lasting impression on me as I reflect upon that day. 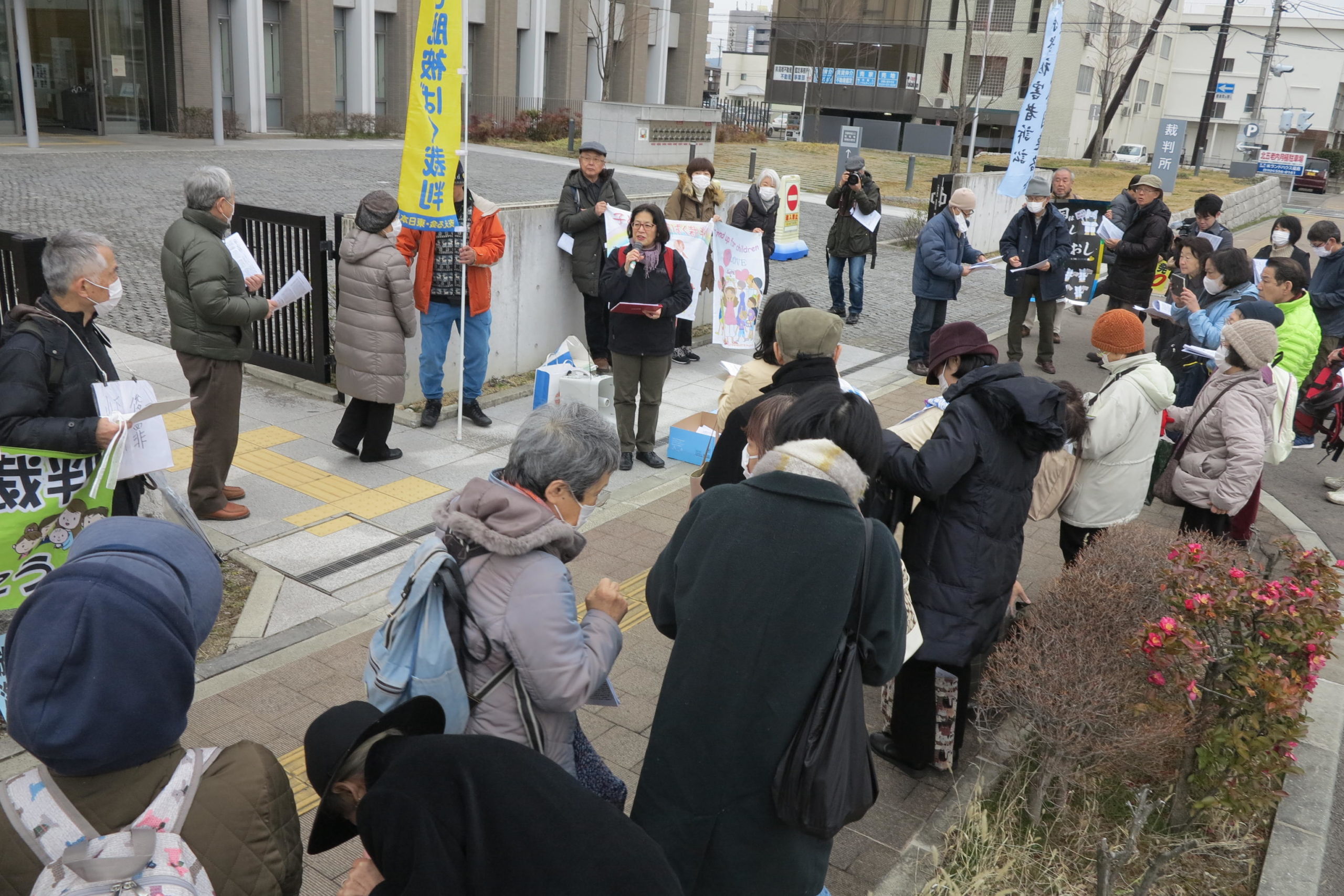 At present there are more than thirty court cases against TEPCO (The Tokyo Electric Company), Fukushima prefecture and the Japanese government. The Children’s Trial Against Radiation Exposure was filed in August 2014 by 35 children and 166 adults. The children are suing for the right to have a safe environment to do their studies. The parents are suing both the prefectural and national governments for failing to provide clear and adequate information and for failing to take measures to protect the health of Fukushima residents. This, they say, exposed their families to unnecessary levels of radiation. This court case has received special public attention for the way in which the lawyers have been able to clarify the dangers of daily low dose exposure to radiation.

Into the courtroom walked Prof. Yamashita in a slick grey suit. He sat down facing the judge so that none of us in attendance could directly see his face. To his left sat seven lawyers representing the plaintiffs, and behind them fourteen plaintiffs. To his right were eighteen lawyers, representing Fukushima prefecture and several Fukushima municipalities as well as the Japanese government. The first 90 minutes was carried by the defendant lawyers. They used all of their time to clarify Yamashita’s credentials, and his past experience in the field of radiology. Yamashita had also been involved in many studies involving victims of the Chernobyl disaster. The second 90 minute period was given over to the plaintiff lawyers. They focused mainly on four points, 1) Yamashita’s understanding of “Crisis Management,” 2) his decision not to hand out stable iodine to residents (in the event of a radiation emergency stable iodine is a non-radioactive iodine that helps protect our thyroids from radioactive iodine intake) , 3) the content of Yamashita’s lectures which he carried out throughout Fukushima prefecture in which he downplayed the dangers of radiation, and 4) Yamashita’s understanding of how he can claim that there is no direct correlation between the nuclear disaster and the significant increase in number of children (over 230) diagnosed with thyroid cancer. 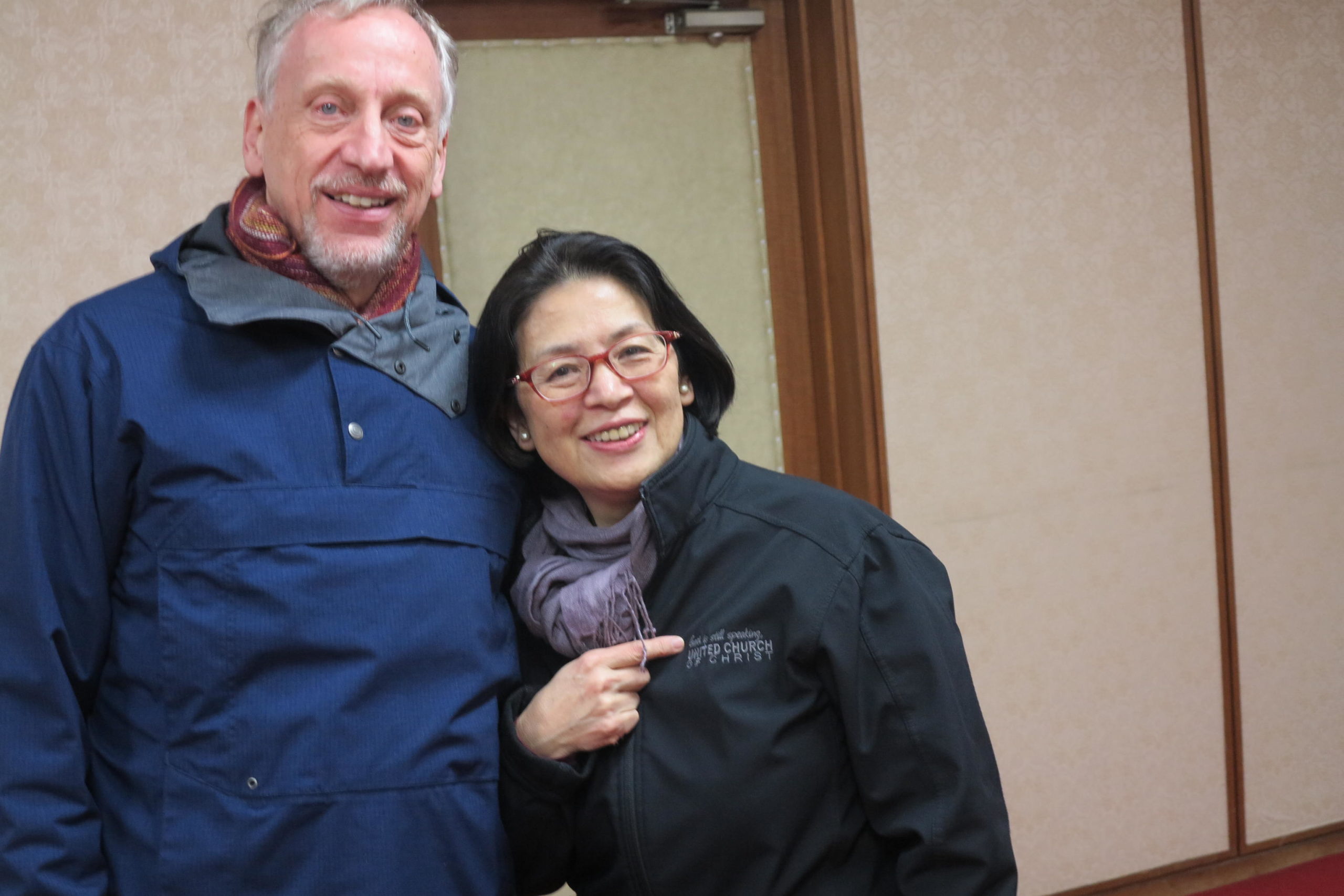 Though the atmosphere in the room was subdued, I could feel the anger among those who came to show support for the plaintiffs and hear the witness. At the end of the hearing, the defendant lawyers were given one final chance to ask the defendant a question. The question was, “What was the primary message you wanted to convey to the people of Fukushima?” Yamashita began by referring to the fact that because he himself was a hibakusha of the Nagasaki atomic bomb (his family had survived the bomb, and Yamashita himself had suffered from the effects of radiation), and that he had also spent much of his professional career studying the situation surrounding the victims of the Chernobyl disaster, he felt that being tasked to resolve the troubles in Fukushima was his own destiny. (Terumi later told me that this comment reveals that his intentionality was self-centered, and not Fukushima-resident-centered.) He went on to say that everywhere he went in those first several months, he could sense the panic in the hearts of the residents. He wanted to calm them down. He wanted to let people know that everything would be OK. At one point he used the phrase “Don’t cry over spilt milk.” (A phrase which really angered people.) His intention was to set a narrative for the people so that they could move on with their lives. When he was finished, the defendant lawyer sensed that a crucial point was missing in Yamashita’s response. The lawyer followed by reminding him, “And, you were concerned for the health of the people in Fukushima?” To which the witness responded “yes.” It was almost as if the health of the residents was an afterthought.

The verdict is expected by the end of this year. Following the proceedings and the press conference, I had a chance to sit down with the plaintiffs and their lawyers for an evening meal. Across the table from me sat one of the plaintiff lawyers. I asked him, “The chances of winning court cases that involve the national government and its energy policies are so slim, aren’t they?” He smiled at me and responded, “Yes, but even so there are times when you just can’t help but stand up for your own dignity. That is what this fight is all about.” Common Global Ministries is honored to be able to accompany and support those who are involved in this struggle.