The story shared by Fr Yukoub Babawe of the Oum-El-Nour Relief Committee of the Syrian Orthodox Church in Iraq’s city of Erbil moved and challenged participants at a recent meeting in Beirut. 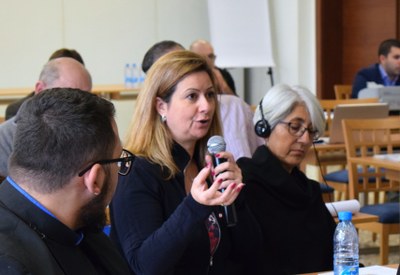 Each day churches in Erbil have offered shelter, food and basic support to more than 20,000 people from the Nineveh plain and Mosul during an occupation by terrorist fighters from the group calling itself Islamic State.

Yukoub outlined Oum-El-Nour’s initiatives and revealed the suffering of the internally displaced, whilst elucidating on massive efforts and solidarity from the local community and the church in their diaconal work.

The 46 participants came to Beirut’s Notre Dame du Puits monastery from Egypt, Iraq, Jordan Lebanon, and Syria, as well as from partner organizations in Europe, North America and Africa.

They reflected on vision, values and continued training on strategic planning and human resources. They were led by Dr Jean Kors of the International Center for Organizational Development (ICOD).

Historical trends along with the challenges of migration and immigration in and from the region, were analyzed.

Every evening, there were reports on their work, offering examples of their regional diaconal work.

Participants underlined that cooperation and networking among the churches and church-related relief and development organizations needs improving.

Further, a need was outlined for staff training related to actual needs, drafting of visions and missions for each organization, formulating overall goals, specific objectives and expected outcomes.

Group discussions also pointed to the importance developing the performance of the concerned organizations in relief and development.

Samer Laham affirmed that the seminar showed the MECC is ready to respond to performance requests.