Colombia peace accord brings both joy and concern 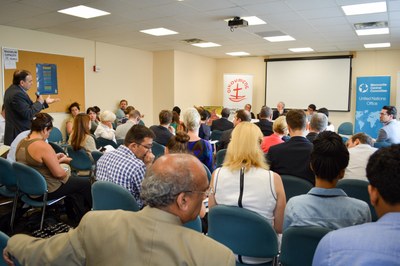 These striking words were shared by Jani Silva de Rengifo, a board member of CONPAZ (Communities Building Peace in the Territories) and peasant farmer in Puntomayo, Colombia, at an event titled “Building a Just and Sustainable Peace Process in Colombia,” held on 18 August at the Church Center for the United Nations in New York and co-organized by the World Council of Churches (WCC) with Caritas Internationalis.

The gathering brought together United Nations agencies, member states, civil society and faith-based organizations to hear from representatives of Diálogo Intereclesial por la Paz, Interchurch Dialogues for Peace in Colombia, or DiPaz, a platform comprised of churches and church-related organizations in Colombia that has been working on the the promotion of peace and justice, human rights, non-violence, peace-building and reconciliation activities for more than 25 years. DiPaz has been an active member of civil society in the peace negotiations between the Colombian government and the FARC (Revolutionary Armed Forces of Colombia) for the termination of armed conflict between the two parties after nearly 60 years of unrest.

There is much joy and hope accompanying the historic peace negotiations between the Colombian government and FARC, while concerns and doubts still abound. “DiPaz has been instrumental in bringing together members to engage in the peace process, of which not everyone is in favour—even churches—because of a lack of knowledge about the peace process as a whole,” explained Rudelmar Bueno de Faria, WCC’s representative to the United Nations and coordinator of the Ecumenical United Nations Office.

During their presentations, DiPaz representatives said the implementation and verification of the peace accords will, undoubtedly, be the most complicated step of the process. Some of the many risks faced by the majority of Colombians, particularly those residing in the rural areas, include the rise of paramilitarism due to the security vacuum left by the FARC demobilization; the urgent need to address agrarian policy and development as a root cause of the conflict; the nearly 7 million internally displaced people within Colombia; and the establishment of an official mechanism of that will facilitate civil society’s verification of the implementation of the peace accords and the security of the most vulnerable.

Danila Rueda, director of the Interchurch Commission for Justice and Peace and a member of the Coordination Group of DiPaz, also emphasized the fundamental importance of justice as a framework for what comes next. “We recognize that jailing those responsible for the violence—not just the guerrillas but also those who have committed or authorized atrocities—is not the way forward towards truth, justice, reparations, and reconciliation, but the dignity of the victims is key.”

Jenny Neme, coordinator of DiPaz, shared that they would continue to be creative and innovative, to accompany the victims in the territories, and to accompany the re-integration of ex-combatants, particularly children, back into civilian life. The panellists emphasized that they are moving forward in their work with hope, towards building a democracy and society based on justice and rights.