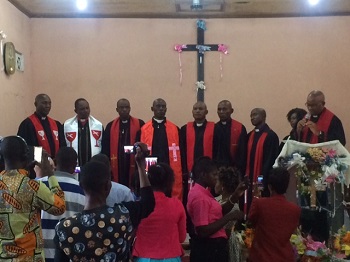 The greatness of a team often depends not just on the talent of its starters, but also on the strength of players who occupy the bench.  Momentum can be gained, or lost, when the starters are relieved or cannot finish the course of a game or match.  This is why a strong bench is vital for team success.

In Mbandaka, churches affiliated with the Community of Disciples of Christ in Congo (CDCC) are making certain they have a strong bench.  Ordinations ensure that the church continues to grow by recognizing and blessing individuals who will provide pastoral care and responsibilities going forward. Recently, the CDCC ordained five pastors in one weekend.  The four men and one woman have been preaching and teaching in several local congregations. Ordinations are a time of celebration for the church, and a culmination of years of personal commitment to study and preparation by the ordination candidates.  The congregations served by each minister were present and vocal during the ceremony.  It was an atmosphere akin to a graduation ceremony, as congregants cheered for their minister when presented before the capacity crowd at the Mbandaka 3 Church.

So why become an ordained minister if one is already serving the church? In the CDCC, there are three advantages afforded by ordination.

1)      Confirmation of a minister’s calling into the ministry
2)      The minister is placed on the official list of pastors
3)      The minister can assume the full role of a pastor at a congregation, even organize a new church.

The ordination celebration is a high church affair.  The ceremony featured six choirs, and lots of dancing and praising God.  Rev. Eliki Bonanga, President of CDCC, lead the entire administrative leadership of CDCC, just about all of whom are ordained clergy.  The procession into Mbandaka 3 included the CDCC leadership in black robes marching behind the Arc en Ciel Chorale from Nouvelle Cite Church, the ordination candidates followed by their spouses (in one case a mentor and friend) holding new black robes and other clergy participating in the ceremony.

The highlight of the ceremony was the presentation of each minister clothed in their black robe with pastoral stole for the first time.  Sometimes it became hard to see as eager congregants rushed toward the pulpit to snap pictures or record a video of the occasion.  At first, each newly ordained pastor was shielded by a circle of black-robed clergy until the moment they were fully attired in the vestments, and then revealed to the congregation.  The choirs and musicians filled the time with songs of adoration and praise, which added to the anticipation.

With more women in DR Congo studying theology at universities, entering seminary and receiving doctorates in ministry, future ordination ceremonies will no doubt feature more women candidates. What a blessing it is to know that the Disciples of Christ in Congo have a good bench occupied by men and women prepared to minister the Gospel of Jesus Christ, and lead the church forward through another century.

Paul Turner serves with the Community of Disciples of Christ in the Congo. His appointment is made possible by your gifts to Disciples Mission Fund, Our Churches Wider Mission, and your special gifts.