Since February, I’ve been on home assignment in the United States, speaking about the work of Interfaith Cooperation Forum (ICF) in Asia and preaching in local churches. My travels have taken me to Ohio, Colorado, the state of Washington, Montana and Wyoming. I’ve also attended Global Ministries meetings in Cleveland and Indianapolis and took part in the annual Ecumenical Advocacy Days in Washington, D.C., where a focus of our advocacy with the Senate delegation from Ohio was the current immigration crisis in our country and the uncompassionate way it’s being addressed.

One of the joys of my home assignment has been being able to see so many parts of our beautiful country and to meet so many wonderful people who are active in their local Disciple of Christ and United Church of Christ churches, especially in mission at the international level through Global Ministries and in their local communities. It gives me more hope for our country and the world. 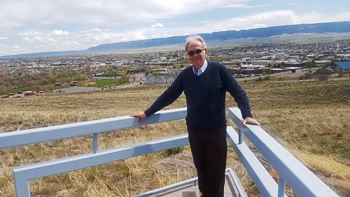 I have also appreciated that people have taken me to see some of the museums in their area, such as the Lewis and Clark National Historic Interpretive Center in Great Falls, Montana, and the National Historic Trails Interpretive Center in Casper, Wyoming, that describes life along the Oregon Trail, the California Trail to pan for gold and the Mormon Trail to Salt Lake City as well as the Pony Express. While in our nation’s capital, I was so impressed with the National Museum of the American Indian that I visited it twice.

In the sermon that I shared, which was entitled “They Will Know That We Are Christians” based on Exodus 1:8–2:10, Romans 12:1–8 and Matthew 16:13–20, I highlighted the role that competition plays consciously or unconsciously in our society as well as in other parts of the world and how this invisible and ever present force can bring about division between people and can even lead to conflict. I noted too that if we want to transform our world, instead of conform to it, we need to alter some of the norms at the foundation of our society, such as competition that fosters a goal to make as much money as possible rather than distribute as much money as possible. As a counterweight to competition, I offered a greater emphasis on cooperation. In this way, we can use the different skills with which we’ve been blessed by God to change our world in a way that reflects the values taught to us by Jesus—unconditional love for others, compassion, a reverence for life, care for our neighbors, peace grounded in justice, etc. What we do and say thus becomes a manifestation of our spiritual worship to God, and, as a result, people will hopefully know that we’re Christians.

I was fortunate that my travels around the United States took me to places with such diverse daily experiences of life as Washington, D.C., and Montana and Wyoming. People have such different lifestyles and interests that it’s almost difficult to comprehend that we are all part of the same country. There seems to be an Ideology of Me that keeps these differences cemented in place. I believe our faith pulls us to embrace an Ideology of the Other. If we can leap from the former ideology to the latter, I think we can begin to address the divisiveness, tension and conflict that afflicts our country. With more cooperation and less competition as I emphasized in my sermon, I think this process is possible—a process that is not confined to our national borders but transcends them to our relationships with other countries as well. 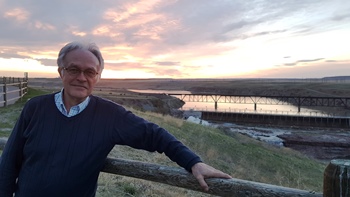 These are my last words to you with perhaps a degree of wisdom. I will return to Hong Kong on August 1 and will retire there. As I shared with the Global Ministries board members at their meeting in April in Indianapolis, serving in Asia for almost three decades has been the greatest joy of my life. It is rare that we get to do something that is so fulfilling and gives meaning to our life. I have been truly blessed to have had the opportunity to hopefully bring about some change for people in Asia. It is a path upon which I will continue to tread in some way in the future. To paraphrase Robert Frost, I am glad that I took the one less traveled.