As I reflect back over my last four years in the Democratic Republic of Congo, many advances can be seen at the Congo Protestant University/Université Protestante au Congo (UPC). New partnerships have been created, new systems put in to place, and new relationship possibilities have been presented. Constructing a future is a process that involves the efforts and commitment of many and a process that evolves with time, patience and dedication. 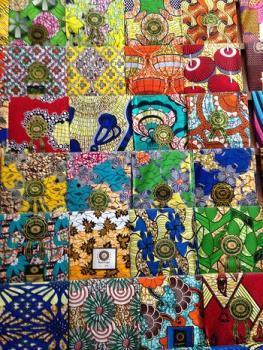 The load-balancing approach to internet coverage ensures that the internet outages will be minimal. By balancing two separate connections - fiber optic and satellite – there will always be a connection in the event one provider goes down. The Network Administrator has undergone training and is now fully certified in the latest technology. As a result of his commitment to this project, he recently received a promotion and is well-positioned to oversee UPC’s network. With the server in place, research tools will soon be available to professors and students as they strive toward excellence - access to e-learning and online resources, document exchange over a robust network and training for the teams that will be using these online tools. The progress has been tremendous and the future is full of opportunity.

The University’s research capacity has been steadily increasing. The collaborative research project with Johns Hopkins entitled “Malaria Transmission and the Impact of Control Efforts in Southern Africa” is ongoing. The fourth, successful field research trip to Eastern Congo on the border with Zambia took place in August 2017. Recently, we learned that this partnership with Johns Hopkins has been further solidified with the approval of funding for this project to continue over the next seven years.

The research collaboration between UPC and the University of Missouri-Kansas City has completed its first year. During that time, a specimen freezer (-40°F) and an Uninterruptible Power Supply (UPS)—solar panels, back-up batteries and lightning strike protection—were also installed. Once the blood samples have been collected from the health centers around Kinshasa, they are brought to UPC to undergo the first level of analysis as the team tries to understand the extent of viral diversity in human populations and screen for new viral strains. A power outage would destroy the specimens and the entire study would be ruined. Once the initial analysis took place, the first group of samples was shipped to the United States for further testing. 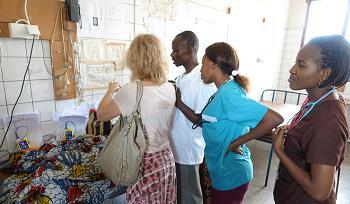 The field research team, made up of five medical doctors, four of which graduated from UPC’s Medical School, is committed to the success of the project. Their efforts have paid off – the donor is extremely pleased with the results and has agreed to a year-long extension of the project.

In addition, collaboration with UPC, the U.S. Embassy and Vanga Hospital was established in response to the needs of UPC’s Medical School internship program. Funding to rehabilitate the student dormitories was approved. Construction has begun to create a pleasant living environment for the student interns as they complete their residency program at the rural hospital.

As I continue with my work at the University, I remain encouraged with the progress that has been made and the possibilities that lie ahead. I am truly grateful for the many blessings that have been a part of the Congo Protestant University’s achievements.

May peace reign in Congo as 2018 unfolds before us.
Linda James

Linda James serves as a Long-term volunteer with the Protestant University in the Democratic Republic of the Congo. Her appointment is made possible by your gifts to Disciples Mission Fund, Our Church’s Wider Mission, and your special gifts.