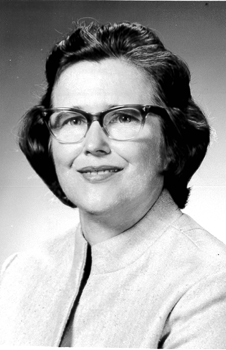 Daisy Bell Edgerton passed away on March 23, 2017.  Daisy was born in Coushatta, Louisiana on December 22, 1921, to her parents, Clarence Eugene Edgerton and Daisy Belle Gardner Edgerton.  In 1941 she graduated from what is now Northwest State University of Louisiana at Natchitoches with a Bachelor of Arts degree.  She worked for the U.S. War Department from 1941 to 1946, primarily at the Port of Embarkation in New Orleans.

Having watched the motion picture Lost Weekends, Daisy turned her thoughts toward a church-related vocation for herself.  In preparation for such a vocation, she continued her education and received a Master in Education from the University of Kentucky, had a year of study at Lexington Theological Seminary, studied at the University of Michigan, took one year to study the Chinese language at Yale University (as Daisy thought she was being appointed to China), and learned the Japanese language at Naganuma Japanese Language School in Tokyo, Japan.

Daisy was appointed as a Christian educator to Japan in 1949 through the United Christian Missionary Society, a predecessor mission body of what today is Global Ministries.  She was on the staff of Sei Gakuin in Tokyo, where she taught in the primary school, boys’ high school, and girls’ high school. She taught English, led student activities, and participated in all faculty decisions.  Eventually, Daisy became a full-time professor and the chaplain for the newly established Junior College.  She also held Bible classes in several high schools.

Daisy concluded her missionary service in 1971 and returned to the United States.  Upon returning, she became the first employee of the Metropolitan Health Council in Indianapolis where she worked until her retirement in 1986. In retirement Daisy did extensive volunteer work with the Indianapolis Public Schools, giving extra help in the classroom and testing kindergarten children, helping foreign students with their English, and she taught English to groups of Japanese women and gave them orientation to U.S. culture.

Daisy was an active member of Downey Avenue Christian Church, Indianapolis, and particularly enjoyed teaching in the Sunday School, working with the after-school program, and helping in the resettlement of refugees whom the church sponsored.

Daisy Edgerton is one of the last missionaries recruited, trained and educated for international mission by the United Christian Missionary Society.   She was part of a select generation that was commissioned for long terms of service in specific country relations.   After university degrees and a year at Lexington College of the Bible, her first UCMS assignment was studying Chinese at Yale University.  Events in 1949 ended missionary presence in the People’s Republic of China, and, instead, she headed for a long service of 22 years in Japan.  Disciples already had a half-century history in Japan, and churches in Tokyo, Akita, and elsewhere had been long-established.

But coming shortly after the end of World War II and the capitulation of imperial Japan, it is impossible for us to imagine what Japan was like in the first years Daisy was there.  She had to deal with feelings that were complex and surely difficult.  This included the imprisonment by the Japanese in the Philippines of fellow missionaries like Joe and Win Smith.   Tokyo had been firebombed in 1945, and Hiroshima and Nagasaki were horrifying memories.   Daisy represented suffering and love in Jesus Christ that showed great changes of reconciliation and peace for Japan over 20 years.   She made the development of the United Church of Japan, the Kyodan, and Sei Gakuin school familiar among the CWF and Disciples of Christ congregations in the U.S. and Canada.

When she returned to Indianapolis, she still showed a missionary spirit as the first employee of the Metropolitan Health Council, where she worked until her retirement in 1986.  She often served as a volunteer, and she was particularly helpful with the refugees sponsored by Downey Ave. Christian Church. All who knew Daisy through these later years admired her and enjoyed her friendship.  We thank God for her example and her life of service.