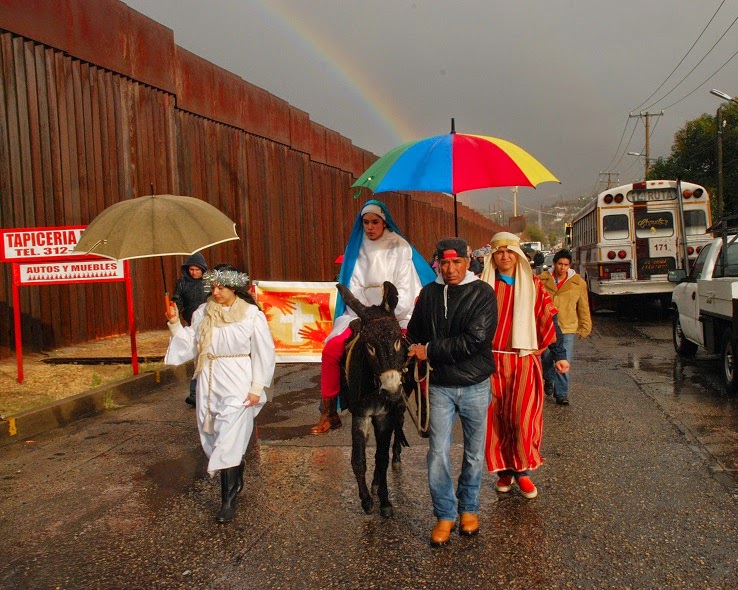 And she gave birth to her firstborn son and wrapped him in bands of cloth, and laid him in a manger, because there was no place for them in the inn. Luke 2:7

Mary was riding on a burro and Joseph was walking beside her as they traveled by the Nogales border wall in search of shelter during the Migrant Posada. Posadas recreate the journey from 2,000 years ago as Mary and Joseph are refused lodging at various stations along the way and are finally welcomed in at the end of the procession. A cold rain was falling this day, but for a brief moment, the sun came out and a rainbow appeared.

The first station was at the Nogales wall, which was built in 1994. “Wherever there’s a wall, there’s a closure of the heart,” read a banner attached to the wall.  Those were the words spoken by Pope Francis on the 25th anniversary of the fall of the Berlin Wall.

At each station, the people in the procession sing to ask for lodging and the people inside sing in response that there is no room. “In the name of justice, I ask you to let me in. I will not cause you harm, I just want to work,” sang the people on the south side of the wall at the first station. “We have thousands of agents that protect our borders and you won’t get across,” they responded.

“In the name of justice, I ask for your support and solidarity. Separated from my children, my heart is broken,” sang the deportees at the second station. “I don’t care about what you’re going through. The children that you left behind, you are not going to see again,” was the response.

There was a moment of silence at the third station to remember the thousands who have died in the desert. “We’re half a family, deported without pity. The children are left crying, lamenting that they are orphans,” sang the people outside. “We don’t want you to come here, stay over there.” replied the people inside.

Mary and Joseph were finally welcomed at the last station, which was at a dining hall where recently deported migrants receive two meals a day. There we all sang, “Let’s celebrate without borders or barriers, people who thirst for justice.  Today we will work and struggle together for justice and dignity.”

Scott Nicholson serves with Hogar de Esperanza y Paz (Home of Hope and Peace), a community center located in the Bella Vista neighborhood of Nogales, Sonora on the Mexico-U.S. border.