After several decades of a diaconal, ecumenical and pastoral accompaniment of communities and situations in conflict, TCM is further developing its Chaplaincy Program to provide counseling on human rights and conflict resolution for peace with justice and dignity in Mexico.  This program provides a pastoral presence through chaplains in university, prisons and other institutional settings, seeking to make available pastoral counseling to every person needing to talk, and feel accompanied, in need of consolation and strengthening, as well as to sort out crucial things with a chaplain during stressful moments in their lives.  People can talk to a chaplain when they need help in dealing with grief or for comfort and guidance while reflecting on issues and making decisions in an environment of confidentiality and with an absence of prejudice.  Chaplaincy helps people to explore the deep questions of life but also ways to discern God´s will in their lives.  Chaplains serve to guide people in relation to their own religious and faith traditions and to explore deep questions about existence, where there may be no clue about how to begin the walk.

TCM has brought its resources to the families as well as friends and fellow students of 43 university students who were detained by Municipal Police in Ayotzinapa, in the Mexican state of Guerrero, and have disappeared without any trace.  A CTM ministry of Chaplaincy was created to help.  This Chaplaincy Initiative also provides for the spiritual and material care for families and related people to previous human rights and violence crises (Ciudad Juarez, Acteal and Chiapas, among others).

The people involved in these situations are mostly poor families from rural areas, women, and children and the chaplaincy program includes:

The program anticipates serving approximately 500 persons in direct care and accompaniment per year; approximately 2,000 persons who are part of the circle of relations with the 500; and communities and groups within civil society in an indirect way, as they will participate in concrete ways in the Chaplaincy Initiative through being part of the liturgies, the messages, the materials and the presence of the Chaplaincy Initiative.

The TCM Chaplaincy Initiative hopes to: 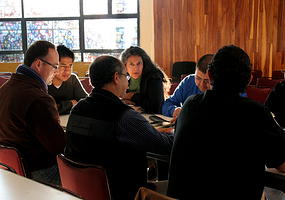 These objectives will be accomplished by offering services through personal and/or group interviews for the personal and spiritual accompaniment of people as they request it, within a spirit of openness, absolute confidentiality and non-discrimination.  Chaplaincy services will be offered by an Ecumenical Chaplain and by Denominational Chaplains.  They will provide liturgies, prayer and meditation time, according to the needs of the people, particularly to social movement leaders and participants.  Cultural and academic activities will provide a place of reflection about the present crisis and a linkage with other organizations, developing agreements between institutions for a pluralistic dialogue within Mexican society.  TCM will also include a course on “Introduction to Studies on Peace and Conflict Resolution.”  Three workshops for church leaders will be organized with the theme:  “Christian Action for a Peacebuilding Diaconia.”  Marches, caravans, and displacements of civil society will be accompanied by Chaplains in their claim for peace, justice, and dignity in Mexico.  Five National Workshops will be organized for the promotion of a Popular and Citizens Constitution for Mexico.  An evaluation in each semester will be conducted to see the incidence of Chaplaincy services and the ways to improve the initiative.

On September 19, 2017 Mexico experienced a 7.1 magnitude earthquake that struck the states of Puebla, Morelos, and Mexico City. The death toll reached 370, 6,000 individuals were injured, and many buildings collapsed in the tremors. Many lost their homes. The Theological Community of Mexico (TCM) and the Diaconal Ecumenical Chaplaincy Initiative (DECI) created channels to provide immediate assistance through five primary objectives:

To fulfill these objectives, students, professors, chaplains, and others affiliated with TCM, gathered to design a strategy to perform the following activities: 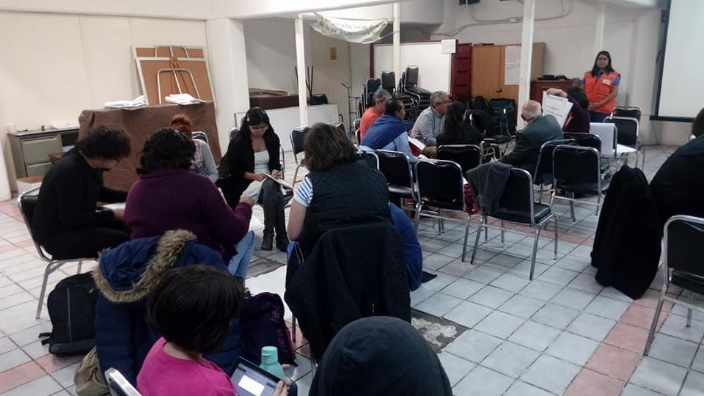 In the first 144 hours after the earthquake, TCM provided 12 tons of food, tools to remove rubble, clothing, hygiene items, blankets, and mattresses for 1,500 families. TCM provided accommodations to the National Youth Institute Orchestra due to the loss of their building. TCM organized a disaster risk-management workshop for 40 Mexican participants, including the entire TCM team and representatives from the Methodist Church of Mexico. DECI organized a psychosocial spiritual support workshop, which provided specialized psychotherapy to 25 earthquake responders. Systematized emergency relief continued for the last three months of 2017 under the leadership of Reverend Hugo Gallardo. During this time, 200 seriously affected families in five communities received 1,000 mattresses, 2,000 blankets, health services, purified water, hygiene products, provisional survival infrastructure, and 45 tons of food.