Do You Remember Me? 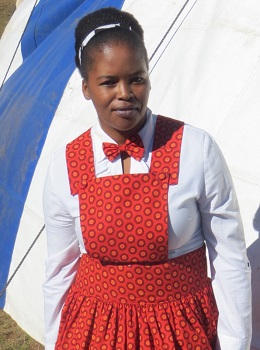 Probably most, if not all, of us end up being teachers in some way.  If not by being in the teaching profession, then by raising children, coaching sports or training a colleague at work.  Two of the most satisfying aspects about teaching are seeing your pupils grow in understanding and also meeting them years later.  Although I haven’t been teaching students in school for several years now, I am constantly reminded of the fact that I was a math and religion teacher, as well as a teacher/leader of Scripture Union and a basketball coach.  I’m reminded of these things because I frequently run into my former pupils in the capital city, Maseru, where I work most days.  During my lunch hour I am often out on foot running errands and I’ve become accustomed to hearing, “Ntate (Mr.) Behle” being shouted my way as someone from my Masitise High School days recognizes me.  After passing or failing the “Do you remember me?” test, we chat for a few minutes and I always ask about what they are doing now and they may share news with me about their classmates.

Sometimes this happens far away from Maseru in a very rural area, such as Tebellong in the mountainous southeastern part of Lesotho.  The Lesotho Evangelical Church in Southern Africa (LECSA) has a hospital at Tebellong and it recently celebrated its 50th anniversary.  I went for the mokete (celebration) and I was approached by this young woman, Ms. Reanetse Sekake.  My former math pupil for five years, Reanetse is now teaching math and science at Tebellong High School.  Although she was a day student at Masitise, in our conversation I learned that her mother and father are from villages not far from Tebellong, so she has, in a way, “come home” to teach.  Reanetse did her teaching practice at Masitise when I was still there a few years ago.

I’ve met former students working in the bank, behind the counter at my favorite place to pick up pizza and at police checkpoints on the road.  Others are in the military, work in government offices, computer technology, nursing and, of course, education.  Needless to say, I am especially pleased to meet former students who are teaching math!  I know of at least a half-dozen that are doing so, including one at Masitise.

The hospital at Tebellong provides vital services in a remote area.  To reach Tebellong you either have to cross the Senqu River in a small rowboat or, if the river level is low enough, use a high-clearance 4x4 vehicle.  Well, there is also the helicopter option, which Prime Minister Pakalitha Mosisili of Lesotho used to attend the celebration.  But for most people, it’s the rowboat ferry.  The hospital is in Mr. Mosisili’s home district of Qacha’s Nek and in his remarks to the gathering; Mr. Mosisili promised that a bridge would be built in the near future, much to the delight and approval of those in attendance!

The hospital buildings and facilities were recently improved and refurbished thanks to funding from the Millennium Challenge Account of the American government.  Lesotho has benefitted significantly from this program which has, among other things, upgraded the health institutions of the government and churches. 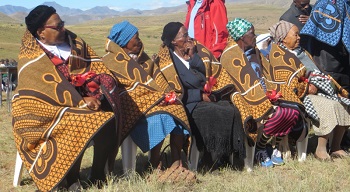 Among the guests at the Tebellong anniversary event were five women who were among the first maternity patients served at the hospital back in the mid-1960’s.  In addition to being recognized for this, the hospital presented them with beautiful new Basotho blankets!

The anniversary banner at the hospital entrance includes words from the book of Ezekiel:   “Seek the lost, bring back the scattered, bind up the broken and strengthen the sick.” (34:16). For 50 years now, the staff at Tebellong have been doing this and, with God’s help, they will continue to do so for another five decades.

To close, let me mention a few resources for learning more about

our partner church here, the LECSA, and life in Lesotho.  The LECSA has a website with a number of articles and many, many photos:  www.lecsakereke.wordpress.com.  There is a recent award-winning film about Lesotho, The Forgotten Kingdom, which is now available in the States on DVD (in Sesotho, but with English subtitles).  Finally, one of my favorite books is Singing Away the Hunger:  Stories of a Life in Lesotho.  Both the DVD and book can be ordered online.