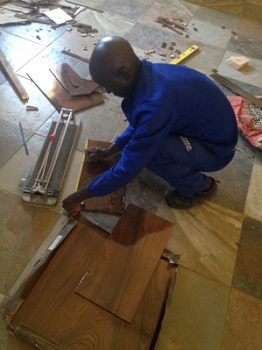 In the last two months the church has been remodeled in the pulpit area by one of our very own, Babe Gumedze, who is a pastor or “mfundisi” at Kukhany’Okusha. He has put new tiles around the perimeter of the windows as well as around the back wall where the main stage is. I watched him and was his assistant when he needed an extra pair of hands. Babe Gumedze has been doing this since he was twelve years old, more than thirty years. I learned that his favorite book in the Bible is Hebrews because no one knows who wrote it. It is also his favorite book because it is one of the books that talks about the relationship of connecting the Old Testament and the New Testament together. His work made me realize that doing things for God and the church are not always perfect. Babe Gumedze’s work was done by hand, which took patience and time. Babe did this out of love for the church; these are all things that God praises.

I found a new way of looking and perceiving the church’s role in my faith. I also, think it is more of a blessing doing things with your hands rather than machine. There is a humility and humbleness with hands. Babe Gumedze’s handcrafted work is beautiful and a blessing for the church. We all thank you Babe Gumedze for your hard work.

Recently I went to a college Zionist choir night vigil which is usually held on Fridays. I attended one on February 17, 2017 which lasted the whole night – yes we don’t sleep. A standard night vigil can last four or more hours. If the night vigil consists of a choir practice like the one I attended it can last from 8pm to as late as 3am in the morning. There is a break in between that consists of tea, water and sandwiches for 45 minutes but usually everybody is enjoying the vibe so much that we want to quickly get back to praying and singing. 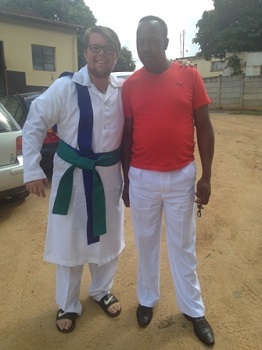 The reason why I attended the night vigil was because I got an invitation from my brother Sambulo. I wanted to attend to see how different college students conduct night vigils compared to a night vigil held at the church that was multigenerational. The night vigil I attended consisted of learning many songs and several periods for group prayer with about five colleges in attendance.  Being a wonderful opportunity for practice, each choir teaches the others their repertoire of songs for final performances. I was moved and deeply humbled by the coming together of young people.

I met a Zionist that joined the church when he was in grade 4, he was originally from another church but chose to switch because he felt more moved by the songs and the energetic atmosphere Zion performances brings. Through extensive talks with many people I found that people say Zionists are looked down upon in Swaziland yet I have learned something different.  I have found that they are very powerful when it comes to performing before the lord when a night vigil or church service is in session. I think Zionists are misunderstood by most in Swaziland. What I like most about my experience at the night vigil was that it was made up of various college students who work hard every day with studies and are all considered youth in their home churches yet they all chose to come one full night to join together. I think this is very beautiful and mature because any of the students could have left at any time but they did not. I am deeply amazed by the persistence and faith the various youth of Swaziland has when it comes to attending church or choir functions and maintaining consistency. In my experience, I would say the students put more emotion in the songs and dance than anyone expects.

I would also like to note that recently in Swaziland, we experienced damage from cyclone Dineo.  It left some harsh flooding in various locations and damage to many homes. I would like to ask for prayers to all those that suffered under Dineo and that we may reach out to them. May our hearts reach out to those who were affected and we pray that they recover a sense of safety. The cyclone was not bad for everyone – Dineo brought extra rain so that our water reserves and crops may be nourished and full.

Stewart Barker serves as a Global Mission Intern with the Khukhan’Okusha Zion Church, Swaziland. His appointment is supported by Week of Compassion, Our Church’s Wider Mission, Disciples Mission Fund and your special gifts.