During Advent, WCC invites the world to “A Light of Peace”

Posted by the World Council of Churches here

In a global campaign, the World Council of Churches (WCC) invites people across the globe to extend “A Light of Peace” for the Korean Peninsula and for a world free from nuclear weapons. 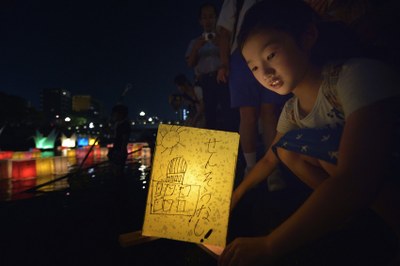 On the first Sunday in Advent - 3 December - the WCC invites the global Christian fellowship to express solidarity for the Korean people and to support efforts to ease tensions and sustain hope. For more than three decades, the WCC has been engaged in facilitating and accompanying dialogue and encounter between Christians from both North and South Korea.

On the second Sunday in Advent - 10 December - one of WCC’s partners, the International Campaign to Abolish Nuclear Weapons - will receive the Nobel Peace Prize at an award ceremony in Oslo, Norway.

By lighting candles during special prayers and worship services two Sundays in a row, people in many nations from many faith traditions can unify and amplify voices of peace.

Promoting peace and nuclear disarmament on these occasions will help the voice of peace being heard around the world, said WCC general secretary Rev. Dr Olav Fykse Tveit. “We want to ensure that people stay aware of the unstable and dangerous situation on the Korean Peninsula and the  threat posed by nuclear weapons. At the same time, we want to emphasize the peace-building strengths of churches, and of the WCC and its partners, and our commitment to  nuclear disarmament.”

Throughout the campaign, the WCC will release special prayers, social media photos, and news and video releases.

Event: A Light of Peace - for the Korean Peninsula and a world free from nuclear weapons

Global Ministries information on Seeking Peace with Justice in Korea