Faith in Politics: A Reflection from Indonesia 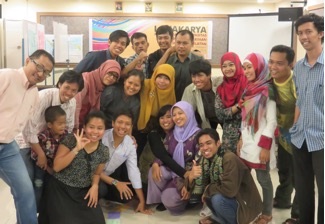 We returned to the US just one day after demonstrations were being held at airports across the country to protest the Trump administration’s immigrant ban. It was difficult to breeze through customs and immigration at Logan International in Boston knowing that others, by the circumstance of birth alone, were being turned away. The body politic in this country— the ability to live together as members of one community—is being tested. Parallels with issues in Indonesia are striking: tolerance of difference and the role of faith in politics is being tested there as well.

What politics means in Indonesia is still being negotiated as different groups test the limits of identity politics—a space opened up by the fall of Suharto’s dictatorship nearly 20 years ago. Militant Muslims, claiming to defend their faith, flexed their political muscle in two massive demonstrations in Jakarta last fall. Thousands of demonstrators demanded that Jakarta’s Chinese Christian Governor, Ahok, be tried for blasphemy, a specious charge based on a false report of a speech he made. Amongst the demonstrators were ISIS supporters who hoped the demonstrations would promote Islamic radicalism across the country. Although neither demonstration precipitated widespread violence, the potential for such had political leaders legitimately concerned.

Promoting the agenda of hardline Muslims is the FPI (Front Pembela Islam/Islamic Defense Front). Some youth in Kupang, the capital city of our province, imitated the FPI to create a Christian “Warrior Brigade” asserting their Christian identity through fear, warning of the dangers of encroaching Islam. Another sign of Christian-Muslim tensions was seen around Christmas when churches in Kupang were guarded by police officers against the possibility of “terrorist attacks”. Although we are now accustomed to police standing guard at churches for celebrations like Christmas and Easter, this is the first time police were armed with automatic rifles, entering worshippers were searched for weapons, and guards examined the bag in which John was carrying his clerical robe. Christians in West Timor are not that different from Christians in the US when it comes to relating to Muslims. Having been in the majority for so long, Timorese Christians never expected they would need to engage seriously with Muslims; indeed they discovered they were ill prepared to do so. Rumors of potential violence spread quickly during last year’s season to celebrate the Prince of Peace.

As Indonesians push and pull for political influence in the post-Suharto era, the relationship of churches to government has also changed. With the passing of Suharto’s tightly regulated and centralized government, Indonesians now enjoy regional autonomy with provincial governments having freedom to order public affairs in accordance with their own social-cultural and economic contexts. A down side of this is that religious communities have become a political commodity. In Christian-majority areas of Indonesia, such as NTT where we live, religious leaders are courted by politicians who hope to gain the “Christian vote,” just as in Java they cultivate the “Muslim vote.” A recent debate in our church, in fact, centers around pastors who participated in a special service of commissioning for a candidate competing in upcoming elections for mayor of Kupang. Given the relationship that has developed, many church leaders who consider political leaders a source of patronage turn a blind eye to their corruption. Silence of church leaders is often bought by substantial contributions by political leaders to build cathedral-like church buildings.

In this era of “reformed politics” in Indonesia we celebrate new and bold efforts by civil society to demand accountability of political leaders and usher in a new political culture. For example, some religious leaders are modeling new ways for Christians and Muslims to relate. When militant Muslims from outside the province were planning a political rally in the guise of a prayer meeting, the Moderator of our church and CGMB member, Rev. Dr. Mery Kolimon, worked together with Abdul Makarim, the head of Kupang’s major Muslim organization, with whom she has cultivated a respectful relationship. Responding to her concerns for potential violence, Pak Makarim ordered the Muslim prayer meeting to be canceled, all banners announcing it to be removed, and made a powerful public statement condemning the abuse of Islam for political purposes. This is a pattern developing throughout eastern Indonesia, where Christians and Muslims are forming alliances to prevent communal conflict and to promote respect for diversity. John was asked by CGMB partner, Interfidei, to facilitate the formative meeting for one such alliance on the island of Sulawesi last fall.  It was inspiring to see so many young people dedicated to building interfaith friendships and solidarity.

The lesson here is that what makes for peace is not lawsuits, police-guards, or warrior brigades, but trusted relationships. As one student wrote in her final Political Theology exam: “The Indonesian home is a home for all the children of the nation who have different ethnicities, religions, cultures, and languages.” Another student wrote: “Democracy is not just a house, it is a household, a home.” Christians and Muslims in Indonesia do not need to defend their religious identity, but rather grow by relating to each other openly and genuinely. This is the way to a new politics and an enriched faith. As we speak in churches this spring, we will have an opportunity to learn how the US copes with similar issues of diversity. May God’s peace be with us all.

John and Karen Campbell-­Nelson serve with the Evangelical Church of West Timor. John serves as a staff support for the Synod’s Theological Commission and Synod programs. Karen serves as a professor. Their appointment is made possible by your gifts to Disciples Mission Fund, Our Church’s Wider Mission, and your special gifts.