The United Church of Christ in Zimbabwe (UCCZ) was founded in 1893 by the American Board of Foreign Missions, the predecessor mission body of Global Ministries.  Global Ministries works closely with this partner church in the many facets of its ministry in Zimbabwe. The denominational membership today is approximately 30,000 people in 47 churches and several preaching points and worship groups. The UCCZ has worked ecumenically on important efforts in Zimbabwe and is responsible for many schools and several health institutions in the country.

The UCCZ seeks to have a long-term, sustainable farming/food security program at its mission at Mt. Selinda.  The program, although housed at Mt. Selinda, will encompass much of the Eastern Highlands area. This project will assist in combating hunger in the communities surrounding Mt. Selinda and the low veld area served by the Eastern Conference of the UCCZ.

The chickens and pigs live in unfenced buildings that are spread around the mission.  Because of this lack of security, losses due to theft have occurred and constant vigilance is necessary to prevent further loss.  Even though the chickens are near the children’s home, 21 out of the last batch of 102 were lost due to theft.

The goal is to build a farmstead with buildings for the various farming operations surrounded by a fence.  The immediate goal is to be able to build the maize storage building, a house for the guard, and the fence by May 2013, with the entire project being completed by November 2013.  Plans for the farmstead have been drawn.  The site for the farmstead has been chosen and permissions have been granted to use the land.  The sooner a safe home for the animals is available the better.

The sustainability of the food security program will be enhanced by the presence of a permanent farmstead.  Having a center of activity will guarantee that the program will continue.  Two years ago only about two acres of sugar beans were raised.  Last year more than 39 acres of corn and two acres of sugar beans were produced.  This year the proposal is to add Irish potatoes to the crop rotation.  There are now about 40 pigs and 100 chickens.

The result of the food security program is that patients at the hospital, the children at the orphanage, and people in the surrounding townships are eating better.  Products are sold at below market rate to make food affordable to the people that really need it.  Products are priced low enough to keep the program viable, but high enough to be able to afford such a building project. The estimated cost of the project is about $30,000 USD. 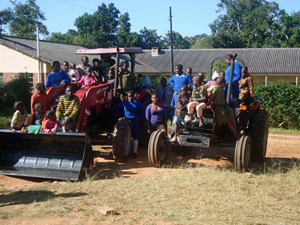 After a few setbacks with farm equipment, and a lack of rain the food security project at Mount Selinda reported a harvest that was below what had been hoped for, but was still a good crop. However, with the full use of the farm tractor, donated through effort of Rotarians in Minnesota and Titan Machinery, there is great optimism for the 2014 harvest. As Reverend Ngadziore, President, UCC-Zimbabwe, said in a recent letter, “Our efforts to push for a better crop are doing well,” and the area being cultivated is expanding.

A second exciting development was that the project manager established a relationship with the principals of nearby schools, who have agreed to purchase their produce from Mount Selinda. This will help to both reduce the costs of food for the students, and provide a more stable market for the project’s corn and beans.

At the time of this writing, the farmstead project had set an ambitious goal to plant 45 acres, which is estimated to cost $7,880.

Global Ministries welcomes additional gifts for the Mount Selinda Farmstead Food Security Project for the next planting and future expansion of the project.

Preparation of the land began on November 24, 2013 which was late for the growing season.  The initial planting was to have been approximately 44 acres; however, only 24 acres were planted -- 19 acres of maize and four acres in beans.  The program participants used a tractor, plough, disc, and a chemical sprayer for the first time.

The area where the fields are located is called Mamombe, and because it is close to the border between Zimbabwe and Mozambique, it receives the Mozambican rainfall pattern.   It was observed during this period that the rains fell a few miles from the fields at Mamombe, but not in the fields themselves.  Unfortunately, when the rainfall comes from the direction of Mt. Selinda, Mamombe does not usually get rain.

The program participants struggled in using the planter which was new to them.  They originally had coordinated with a nearby farm which grows maize, but it did not work out.   Another cultivator was to assist in the assembling of the planter; but he was unable to do so.   Finally, the project directors were able to locate someone to fix the planter but they still did not know how to use the right spacing, so some of the plants ended up being too close together. Moreover, during the seeding process the chain broke due to rust, leaving two rows unseeded.  Since the project participants could not tell which two rows it was, they had to wait for germination in order to reseed those two rows.  Most of the fertilizer was applied using hoes since the planter function did not work well.

Rain began in January and kept the participants from weeding since the rains were torrential.   The risk of the crops washing away or the fertilizer shifting off of the crops due to loose soil was very real.  The project hired a labor force of 29 people to help weed, but since it was raining continuously, many weeds and grass grew up with the crops.  It is rare for maize stalks to be attacked by insects when it is so wet, however it happened on this occasion.  In a week’s time the crop was under serious attack, so they sprayed and were able to save some of the affected crops.

Although the crop is promising at the time of this report, the project will not yield the expected bumper harvest because it was planted late.  In next planting season, the project organizers will have each area divided into four to reduce running water from rain which causes serious erosion.  They also will make drains and/or grow a type of grass will help to protect soil erosion and the washing away of fertilizer.  The project overall has greatly benefited from the availability of the tractors.  A total of 24 farmers have been assisted along with the entire Mount Selinda community thus far.

The arrival of the two tractors from the Fergus Fall Minnesota Rotary Club benefited 32 Chikore farmers this season. Each farmer had more than four acres plowed and disked.  Chikore received good rain which will make their harvest a success story.  The tractors came at a time when the community lacked energy to dig the fields.   The hope is to establish a Food Security Project at Chikore next plowing season beginning with 12 acres of maize, two acres of beans, and two acres of potatoes.  The farm produce will be sold to boarding schools, hospitals, and orphanages at very low prices.  In order to make the Chikore plan come to fruition, there is a need for funds to cover the following:

In terms of production output, the UCCZ anticipates that the Tongogara Agricultural College will give immediate results in their food security project.  The land is approximately 24 acres and is flat.  Crops do not need even half of the fertilizer required in this area as compared to the highlands.  There is a constant water supply to irrigate crops throughout the year, although with a small cost attachment. The College is full of horticultural personnel and students who will supervise the fields.

The UCCZ Farm Food Security Project will also include in the future:

The UCCZ has very high hopes that these new projects will succeed at the Chipinge College of Horticulture at low costs with the biggest challenge being fencing the field to control straying animals.

The United Church of Christ in Zimbabwe continues to run the Farmstead Food Security program to provide nutritious food items to children at the Daisy Dube Children’s Home, elderly residents near the farmstead, and for communities affected by the recent droughts in Zimbabwe. Prior to the program many could not afford nutritious foods, and the drought has placed an additional toll on nutritious food items. Two farms, the Mt. Selinda Farm and the St. Calvin are growing maize and beans, which have grown abundantly. With these foods, the UCCZ has not only provided foods for the Daisy Dube Children’s Home, elderly residents near the two farms, and children at Big Tree Primary School in Chikore. In addition, the UCCZ sold beans and corn in drought-stricken areas of Chibuwe, Rimbi and around the Chipinge distrct.  The profits made from these sales are being used to continue to invest and grow the Farmstead Food Security Program. With the funds provided by gifts through Global Ministries, the UCCZ purchased the seeds for the corn and beans, fertilizers, fuel for the tractor and maintenance for the tractor, and paying wages for additional farm help.

As the food security program continues, the Daisy Dube Children’s home administration is beginning to oversee and work on the Mt. Selinda farmstead, to ensure the continued growth of crops on the farm. In addition, much of the work and oversight of the St. Calvin farm will be provided by Gazaland University.  This will help the farm to continue growing crops throughout the year, and the Gazaland University will receive a portion of the proceeds of produce sales in order to pay for a new construction they are beginning.