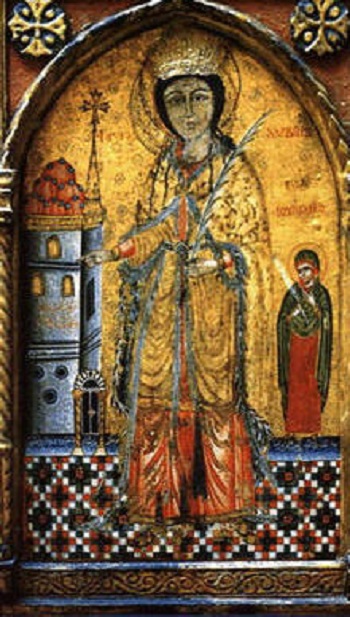 According to tradition, Burbara (Barbara in English) was the daughter of the pagan Dioscurus. On discovering that she became a Christian, her father tried to kill her, but she was miraculously transported out of his reach. Dioscurus denounced her to the authorities. Despite being tortured, she refused to denounce her faith. Her father killed her and was immediately struck by lightning and reduced to ashes. As a result of her father's fate, St. Barbara's prayers are especially sought as protection against thunderstorms and fire, and by an extension of this idea she became the patron saint of gunners, miners and firefighters.

The Orthodox churches celebrate on 17 December St. Barbara's Day. The Protestant and Catholic churches celebrate it on 4 December.  Palestinian Christians mark the occasion with a Burbara pudding made from shelled wheat. Some people believe this is in remembrance of a time she was locked up in a storeroom and only had these ingredients available to eat. Other say it is because as when was running from the Romans she ran thru a field which instantly grew to cover her path.