“They will be like a tree planted by the water that sends out its roots by the stream. It does not fear when heat comes; its leaves are always green. It has no worries in a year of drought and never fails to bear fruit.’ (Jeremiah 17:8)

A few years ago (March 2012) I wrote about the Growing Nations project of the Lesotho Evangelical Church in Southern Africa (LECSA).  Situated on one of the LECSA’s historic mission stations, Maphutseng, Growing Nations trains people in Conservation Agriculture (CA) or, as they often say, “Farming God’s Way”.  The basic tenets are simple:  minimal disturbance of the soil (no plowing), keep the soil covered and crop rotation.  The transition to CA is not always easy, but for those who persevere the result can be life-changing.  And after a few years, like the tree in Jeremiah’s illustration, they no longer fear the heat and drought for they know their crops will still bear some fruit.  Their gardens will still be green. 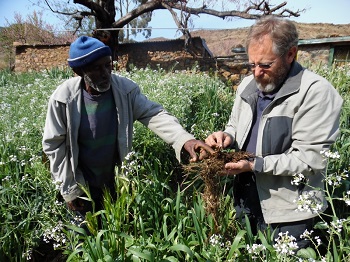 I recently paid another visit to Growing Nations after hearing the Director, Rev. August Basson; speak enthusiastically about a few farmers in the Maphutseng area who had amazed even him with their success.  August, a native of South Africa and missionary with Africa Inland Mission, has long been an ardent advocate of CA and sharing the Gospel through teaching “Farming God’s Way”.  He’s been working closely with the LECSA for a number of years to encourage more people to use CA.  Growing Nations has attracted students, professors and agricultural scientists from around the world and been used for research studies, too. 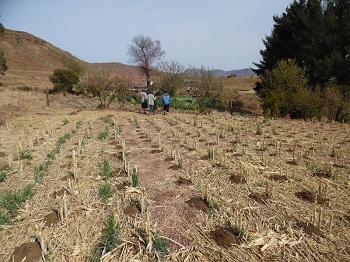 Mid-September is early spring in Lesotho and it isn’t easy to find patches of green in the landscape  of Maphutseng Valley, other than the trees putting out new leaves.  Winters are generally quite dry here and the past four months or more have been dry except for a few light rain showers.

While some of Growing Nations training is done in residential programs at Maphutseng, the message of transformational farming is also taken out into the surrounding area.  A few years ago Ntate Molefi Mpana, from the small village of Ha Lelinyane located high above the Maphutseng valley, attended one of these outreach efforts to learn about CA techniques.  He and a few others from his village are now star practitioners of CA.  August says they have even surpassed what they are doing at Growing 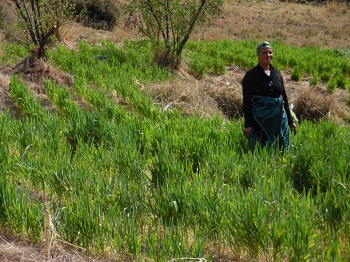 Nations and taken CA to a new level.  He regularly brings students and visitors to the village to see for themselves the impressive fruits of “Farming God’s Way”.  Although the 4x4 journey to the village takes an hour from Maphutseng over a rough and rocky track, no one who comes is ever disappointed by what they see.

The brown fields and scenery are broken with vivid patches of green where CA has restored the soil.  The gardens have lush growth and a variety of intermingled crops, including, wheat, peas, radish and spinach.  The contrast with the surrounding area is startling.  Below all the green is a thick layer of dried grass and crop residue.  Beneath this covering is rich, fertile and moist soil, complete with earthworms.  In a nearby maize field the stubble from the harvest is also covered with grass.  Pull up a stalk root and the soil moisture and richness is once again evident.  Whereas other farmers, who have plowed their fields which have long dried out, wait for the rains before planting, here the soil is fertile enough for planting now. 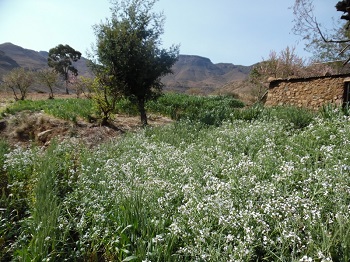 Small piles of dried manure have already been placed in the field where the seeds will be planted.

The covering in the gardens and fields is so thick that weeds are no longer a problem.  In fact, Ntate Molefi and his wife ‘M’e Matšepiso no longer do any weeding!  As for planting, instead of needing a plow and oxen, they just use a hand spade to dig small holes for planting seeds.  Their work is not nearly as hard as in the past and yet their harvests far surpass anything from the years before they started “Farming God’s Way”.  Listening to them talk about the great difference CA has made, it is easy to see that their lives have been transformed.  And for that they thank August and praise God!

The LECSA is currently looking at ways of expanding the outreach efforts of Growing Nations by establishing demonstration plots in various parts of the country.  With God’s help, the LECSA will lead many others to practice “Farming God’s Way”.  And for that, we can all praise God!

Just as the rich soil nourishes the seeds planted within it, so God’s Word nourishes us so that we can flourish.  As the Psalmist puts it, “…planted in the house of the Lord, they will flourish in the courts of our God.  They will still bear fruit in old age, they will stay fresh and green, proclaiming, ‘The Lord is upright; he is my Rock, and there is no wickedness in him.’” (92:13-15).