Fight for Life not Death 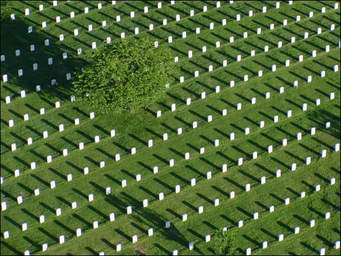 In 1946 Sargent Paul McGrail landed on the Normandy Coast along with thousands of other American and allied soldiers. Not much is known about what he did during the war because he didn’t talk about it but he must have done something heroic because there was a bronze medal in his top drawer in a velvet box.

When I was older I learned from my mother that he was also part of the troops that “liberated the camps.” My father did not die in the war but the war did kill something in him and he returned home, like many men of his generation, broken in spirit by what he did or saw.  His grave is in Arlington Cemetery.  He will be remembered on Memorial Day, along with thousands of other soldiers, by gunshots and a military salute. He didn’t die in war but he did give it his life and for this I mourn. I mourn for the young man whose valor could not protect him from the ghosts of the past or the elixir of alcohol he used to drown them out. I mourn for his fathomless sorrow and pray that he did find some comfort in this life and even more in God’s loving embrace.

Blessed are those that mourn, for they shall be comforted.

The blessing is a promise for those who can faithfully endure the current disorder of the world. Walter Brueggeman, in his book The Poetic Imagination, says that those who have been cynical and calloused and self deceiving or who rejoice in the present unequal ordering of the world and who are unable to grieve about the ruin toward which the royal community is headed will not be invited into God’s kin-dom. Only those who are experienced in groaning will be welcomed in because God’s alternative community will be shaped by their groans for food, grief, and justice.

This Memorial Sunday, before the red, white, and blue parades, picnics, and barbecues, I invite you to explore your own stored up losses, grief stuffed down so you can get through your days. I invite you to hear this blessing addressed to you: Blessed are those that mourn, for you will be comforted. I invite you to accept all the ways that comfort has already showed up in your life and then give thanks and praise to the One who has promised to walk with you through all the valleys and shadows of life and death.

This Memorial Sunday, in a world of spiraling violence - hunger strikes, mass incarceration, drone wars, and terrorist’s attacks, I invite you to grieve our collective loss of life. I invite you to ponder why some lives are grievable and others not. I ask you to think about what counts as a livable life or a grieveable death? General Omar Bradley says, “We have grasped the mystery of the atom and rejected the Sermon on the Mount…. Ours is a world of nuclear giants and ethical infants.”

The original Memorial Day began in April of 1826 when a group of Southern women in Columbus, Mississippi went to decorate the graves of Confederate soldiers. They noticed nearby the graves of Union soldiers and so went and placed flowers on those as well.

On what day do we mourn the loss of other’s dead? After you have decorated the graves in your own graveyard, what other graves need tending to? Go there. Leave your mark and wonder with me, mourn with me, how far away we are from being able to do this in our lives, in our communities, our country. We are called to choose life so that our children can live, all our children.

How? How do we do this? There are multiple ways. For us Christians, forged in Eucharistic remembrance of Jesus’ last supper, we are reminded that we are invited to reorder and reorient our lives to a vision of the world where justice and peace will kiss, and the meek will inherit the earth, and every tear will be dried.

If we are true followers of the nonviolent Christ we must not let our war memorials become our altars. We must not exchange our communion table for blood sacrifices or atonement for our nation’s price of freedom. The Way of Jesus offers us another path, which includes loving our enemies. It includes mourning even mourning their deaths too.

This is not an easy thing to do. There are very few models to guide us. However, there is one example that comes from Israel and Palestine of all places. It’s an example of what it means to share each other’s pain and build hope.

Instead of a day of remembrance for fallen Israeli soldiers, Combatants of Peace and the Parent Circle come together to commemorate the memory of the victims of the conflict and shared pain. Both groups are made up of Israelis and Palestinians; both are committed to a co-resistance to end Israel’s military occupation through nonviolence.

The Parent Circle, sometimes called Bereaved Families for Peace, was started by an Israeli Jewish businessman whose family were refugees from Auschwitz. In 1997 a suicide bomber killed his fourteen-year-old daughter, Smadar. Over time Rami Elhanan came to understand that his daughter was a victim not only of a suicide bomber but also the State of Israel and its oppression of the Palestinian people. Rami co-founded the Parent Circle to help Jews, Muslims, and Christians, who had lost a family member to the violence, to come and work together toward peace and reconciliation. The Parent Circle is  now made up of over 600 families. They do talks and presentations all over Israel and Palestine and around the globe telling their personal stories of loss with a call for peaceful resistance. “If you save one drop of blood, says Rami, you have saved the world.”

Combatants for Peace is an organization of Palestinians and Israelis who have renounced violence as the way to resolve the conflict. They also do talks and give presentation in addition to coordinating demonstrations against Israel’s unjust laws or human rights violations.

Each year these organizations hold a commemorative alternative Memorial Day ceremony, which draws thousands of people . One of the keynote speakers this year was Bassam Aramin, a young man whose father also attends the Parent Circle. Father and son both attend because an Israeli soldier killed Bassam’s sister, Abil, when she left her class for recess on January 16, 2007. Bassam’s father taught his son not to take revenge. He taught his son that ,“vengeance is the way of the weak and cowardly. We shall not take revenge. We will fight for a noble cause. We will fight for life not death.”

In his passionate speech to those gathered at this year’s memorial event, while standing next to Rami’s son, Yigal, who had also lost a sister, he said, “And I say to the Israeli leadership the continued oppression of the Palestinian people will not bring you security. I call upon you to remove your weapons from our dreams, our children, our streets, our sporting events, our water and air. You cannot kill the hope in us. Yigal and I will take our parent’s path. And as my father always says, “You don’t talk about peace, we make peace. The only revenge for the blood of Abir Aramin and Smadar Elhanan is making peace.”

If these two families can mourn together and work for peace, then so can we. We can do it but supporting their co-resistance for ending one of the longest military occupation’s in history.

Their courage to choose another way should also inspire us to seek the same in our own lives - to choose the way that leads to life not more death.

I invite you this Memorial Day weekend to take some time to mourn and grieve your losses. Decorate all the graves you know about here in the US and around the world. Mourn the loss of lives in Manchester, England and in Mosul, Iraq. Mourn and remember  them with your flowers, stories, and prayers. Also take some time to sit with the feeling of emptiness or anger you feel about the loss of leadership or direction in our country. Allow yourself to take it all in knowing you share this mourning with others.

Peacemaking begins where mourning leaves off because it refuses to participate in the cycle of violence and allows our vulnerability to connect us each to each other.