It helps, now and then, to step back and take a long view.
The kingdom is not only beyond our efforts, it is even beyond our vision.
We accomplish in our lifetime only a tiny fraction of the magnificent
enterprise that is God's work. Nothing we do is complete, which is a way of
saying that the Kingdom always lies beyond us.
No statement says all that could be said.
No prayer fully expresses our faith.
No confession brings perfection.
No pastoral visit brings wholeness.
No program accomplishes the Church's mission.
No set of goals and objectives includes everything.

This is what we are about.
We plant the seeds that one day will grow.
We water seeds already planted, knowing that they hold future promise.
We lay foundations that will need further development.
We provide yeast that produces far beyond our capabilities.
We cannot do everything, and there is a sense of liberation in realizing that.
This enables us to do something, and to do it very well.
It may be incomplete, but it is a beginning, a step along the way,
an opportunity for the Lord's grace to enter and do the rest.
We may never see the end results, but that is the difference
between the master builder and the worker.
We are workers, not master builders; ministers, not messiahs.
We are prophets of a future not our own.

The last month has been an emotional roller coaster for all of us. I arrived in Texas just before hurricane Harvey hit and my flight to Puerto Rico was cancelled. I waited for two days with my parents as we received the news of floods in the greater Houston area. Some friends had five feet of water in their homes while my brother, David, and his family watched the water creep up the lawn and then go down before reaching the house. I finally travelled on to my original destination, Puerto Rico, to facilitate two second level Roots in the Ruins: Hope in Trauma courses - Odyssey of Healing: Hope for Individuals and Conflict Transformation for Communities and Congregations. I had planned on spending a few days on the island to evaluate the program and schedule the next steps when hurricane Irma appeared on the scene. The brothers and sisters in Puerto Rico decided that it would be best for me to leave, and so I was on one of the last flights off the island. Then Hurricane Irma tore through the Caribbean Islands and Florida. I hadn´t been back in Texas long when the earthquake devastated Chiapas and Oaxaca. I arrived home in Chiapas to find that everything in my house was fine, but that almost all the Catholic Churches in San Cristobal de las Casas had varied degrees damage. Then, I felt the second earthquake with its epicenter near Mexico City. Practically half of Mexico has felt the shaking again, and again, and again as the aftershocks continue. Just today another earthquake of 6.1 downed an already damaged bridge in Oaxaca as news arrives about the devastation in Puerto Rico from yet another hurricane. I am just beginning to hear from my friends there.

In the next two weeks, I will be co-facilitating a 5 day course at the Intercultural Mayan Seminary on grief, dignity and resilience and a two day course on The Four Winds: Hope for Traumatized Communities. Through these activities were already scheduled, they take on a very different meaning in the light of the devastation. 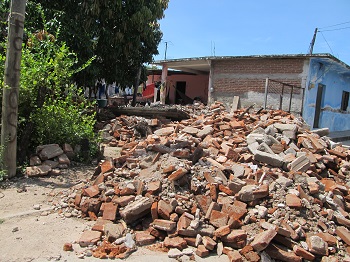 On Thursday of this past week, I accompanied a team from the Institute for Intercultural Studies and Research down the highway from San Cristobal towards the coast to visit towns and cities affected by the Sept. 7 earthquake. Drawing from all the experiences I obtained during the recovery process from the earthquake and tsunami in Chile in 2010, I encouraged the team to seek out signs of resilience and hope in the midst of the devastation. As we traveled through the towns of Ixtepec and Ixtaltepec, we went past house after house with gaping holes in the tile roofs or giant cracks running on the walls or simply reduced to piles of rubble. But we also saw people braving the blistering sun to clean off bricks and tiles to be reused, opening spaces to rebuild, and helping neighbors with basic needs. Our final destination for the day was Juchitán, Oaxaca, the largest city affected by the Sept. 7th earthquake, and still shaking with new tremors. Through contacts that the Institute had in the area, we spent two hours with 63 pastors and leaders of the Church of the Nazarene teaching briefly about emotional first aid, compassion fatigue and the dangers of untreated trauma and then inviting them to begin to envision the new ways that they will be involved in God's mission over the coming months and years. They asked us to return to continue with emotional first aid and resilience development, and to begin the process of training Roots in the Ruins facilitators over the course of the next two years. The Institute will begin the process of securing funds to be able to accompany this group as an encouraging example of resilience. They had the capacity to organize, even in the midst of chaos, bringing together people who represented the broad spectrum of lay and pastoral leadership in the church with youth, middle aged, older men and women with many different capacities and professions, from medical doctors and psychologists, to teachers, students, and housewives.

I wrapped a prayer shawl around the shoulders of Pastora Noemí, a mother, a pastor, and the coordinator of the Church of the Nazarene seminary in Juchitán, Oaxaca. This prayer shawl was given to me last year by the women at First Christian Church in Fort Worth, Texas, and has been on many travels with me. I felt Pastora Noemí needed the comfort and encouragement of all those prayers. She wept with tears of pain as well as gratitude as she began to tell me her story. Her husband was not at home the night of the earthquake. She managed to get her four year old daughter from the second floor down to the first floor as the house fell down around them. Then, she brought her 85 year old mother-in-law to the little piece of the house still standing. It is a miracle none of them cut their feet on the broken glass. Noemi went back upstairs to look for shoes, feeling around in the dark, Then the three huddled together in the deep stillness of the night, unable to find a way out of the house. It was at that moment that they saw the first blip of light. Then another and another. Fireflies! Never before had Noemi seen fireflies anywhere near her city home. They hugged each other, granddaughter, mother and grandmother, and exclaimed with delight at each new flash. When the neighbors finally called and then helped them out of the rubble, they discovered the fireflies were all over the neighborhood, bringing joy and hope sparkling into the night.

I am looking for the fireflies in the midst of all the bad news. One firefly flash for me is the prayer by Archbishop Ken Untener that I quote above. I don’t have to do everything, but I will do my best to shine faithfully in the tiny fraction of time and space where I am called to be a part of God's mission. Thanks to all of you for your emails, prayers and concerns over the past month. Please continue to pray for the Roots in the Ruins: Hope in Trauma program as we accompany those affected by these disasters and train new facilitators to bring healing in the midst of so much need. May each of you shine like sparks of firefly light wherever God has placed you today.